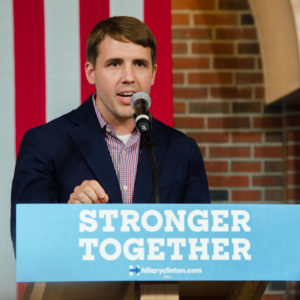 With less than two weeks before the Democratic primary in New Hampshire’s First Congressional District, Executive Councilor Chris Pappas has made his pro-gun-control stance a key part of his final pitch to the voters.

“Gun safety isn’t just another talking point for Chris,” Giffords wrote. “He supports policy solutions from regulating semi-automatic assault weapons to universal background checks. I know Chris has both the perspective and the grit needed to not just talk the talk, but to walk the walk,” Giffords said.

And on Wednesday, Pappas held an event in Manchester with leaders of the New Hampshire teachers union in which he attacked a proposal from Secretary of Education Betsy DeVos that would allow local schools to use federal grant money to purchase guns and gun training for school employees.

For her part, Sullivan has been running a pro-gun-control TV ad for weeks, (and has been mocked by gun activists over her handling of the weapon in the ad).  It’s possible that the Pappas campaign sees erosion in his support as a result.

But it’s an interesting topic to focus on given that the gun issue didn’t even make the list of top issues for New Hampshire voters in the latest UNH Granite State Poll.  It doesn’t make the cut in recent national polls by Reuters or Gallup, either.

Pappas’ position on gun control isn’t new: He supports bans on some semi-automatic weapons and limits on the size of magazines. And Giffords actually first endorsed his candidacy months ago, along with the Gay Pride Fund to End Gun Violence and the Michael Bloomberg-backed Mom’s Demand Action Gun Sense organization. These organizations are viewed by Second Amendment supporters as aggressively anti-gun.

Why is Chris Pappas pushing the gun issue now?  Does he believe it will be a winner in the general election? Or is it a sign, as Kevin Landrigan suggests in the Union-Leader,  “that with her overwhelming financial advantage, Sullivan has become the frontrunner” in the NH-01 primary?

The answer may be in the streets of Massachusetts last week, where pro-gun-control activists led by David Hogg–a student at Parkland High School in Florida) marched to the Springfield offices of Smith & Wesson.  Polls show that younger voters are more energized by the gun issue, and with the push by liberal billionaire Tom Steyer to promote the youth vote in New Hampshire, Pappas and Sullivan may see the gun issue as a way to connect with those voters–voters who have helped several progressive Democrats win upset primary victories in 2018.