Union groups and U.S. maritime advocates are reacting with anger to Rep. Chris Pappas’ call for a waiver of the Jones Act in order to supply more energy to New England. It is a hot-button issue for organizations like the Seafarer’s International Union and the Maritime Trades Department, AFL-CIO (MTD).

And it is also a complete reversal of Pappas’ previous public statements on the issue.

The Jones Act requires the sea transport of cargo between U.S. ports must be performed by vessels that are U.S.-built, U.S.-owned, U.S. flagged, and U.S.-crewed. That means petroleum products from Texas or Louisiana must be carried by America’s limited fleet in order to be shipped to an LNG facility in New England.

During a February 2021 hearing of the Coast Guard and Maritime Transportation Subcommittee where Pappas serves as vice chair, the New Hampshire Democrat said the Jones Act was “essential.”

“A lot has been said as well about the Jones Act and I think most people on this committee understand the essential nature of the Jones Act in protecting our national security and ensuring that the industry is strong moving forward.”

But during an interview with Drew Cline on WFEA radio last week, Pappas said he would support a waiver of the Jones Act to address the current energy challenges in the region.

“I have thought about this and I would support a waiver for the Jones Act to make sure that our energy needs are met this winter,” Pappas said. “There’s no reason why, if we’ve got the resources here in our own country, we shouldn’t be using that to fuel our homes and businesses this winter. So that’s something I know the New England governors have called for. I support that as well.”

“In an emergency situation like we’re facing with home heating oil, absolutely we should have a waiver to make sure that the supplies are there for us,” Pappas added.

The response from national maritime and labor groups was negative. 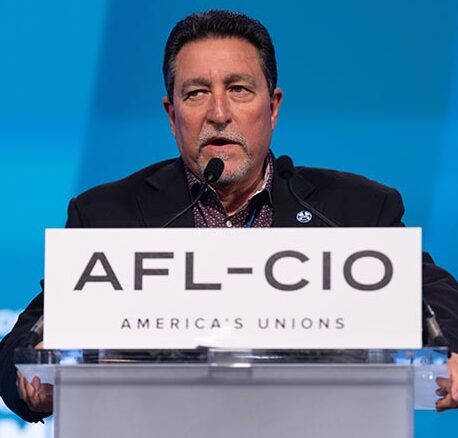 SIU Secretary-Treasurer David Heindel reads a statement in support of the Jones Act at the 29th AFL-CIO Constitutional Convention in Philadelphia, PA.

Matthew Paxton, President of the Shipbuilders Council of America, told NHJournal Pappas is scapegoating the shipyard industry and its workers.

“For years, state politicians in the northeast have failed to invest in sustainable energy infrastructure, but now are using an entire American industry – employing nearly 30,000 jobs in the region alone – as a scapegoat to deflect blame on high energy prices during a tenuous midterm election. Waivers only hand hard-earned tax dollars from American families and communities to foreign carriers and line the pockets of foreign oil traders.”

The President of the American Maritime Partnership (AMP), Ku’uhaku Park, echoed those views.

“Waiving the Jones Act merely enables foreign energy traders to sell fuel to New England at a premium global market rate, which currently is extremely high, and does nothing to solve the lack of reliable energy in New England.”

Labor organizations like the Seafarers International Union, the Marine Engineers’ Beneficial Association, the American Maritime Officers and the International Organization of Masters, Mates, and Pilots have all publicly opposed waivers. And in a statement on its website, the Maritime Trades Department, AFL-CIO (MTD) stated bluntly: “Since its founding in 1946, the MTD has stood by and fought for the Jones Act.”

One labor organization is notably silent—the New Hampshire AFL-CIO, which has endorsed Pappas for reelection but declined to answer questions about his position on the Jones Act.

Pro-competition advocates, on the other hand, are delighted with Pappas’ reversal on the issue.

“The Jones Act contributes to New England’s high energy prices,” said Cline, who also serves as president of the free-market Josiah Bartlett Center. “As warnings of winter fuel shortages have increased, Rep. Pappas was put in a tough spot. He had to choose between helping New Englanders or the shipbuilding industry this winter. He chose to help New Englanders.”

Eversource CEO Joe Nolan joined in the call for a Jones Act waiver in a letter to President Biden.

“The president did this when Puerto Rico suffered the devastation. He was able to provide relief through the Jones Act that allowed foreign vessels to be able to move in and out of American ports with the necessary supplies,” Nolan said. “This is no different.”