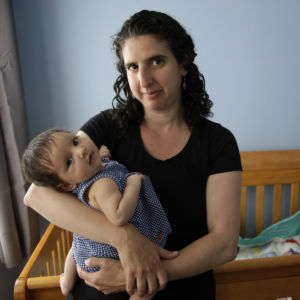 In this Thursday, June 1, 2017 photo Elena Tenenbaum holds her eight-week-old baby Zoe while standing for a photograph at their home, in Providence, R.I. Tenenbaum, a clinical psychology researcher, had her second daughter in April of 2017, and has been able to use Rhode Island's paid family leave program, which started in 2014 and covers four weeks of partial pay. (AP Photo/Steven Senne)
News

A bill seeking to establish a paid family leave system in New Hampshire advanced through committee on Tuesday, setting the stage for an upcoming House vote on the proposal.

The House Labor, Industrial and Rehabilitative Services Committee voted by a two-to-one margin to pass HB 628, which proposes the establishment of a system of paid family and medical leave insurance in the Granite State.

The program’s funding would be supported by a payroll deduction of .5 percent per weekly payment and afford individuals 12 weeks of paid time off.

According to the legislation’s text, employee contributions will not factor into the General Fund.

Currently, the U.S. is the only developed nation which does not provide paid family leave insurance. In 1993, the Family Medical Leave Act was passed, which affords women the right to unpaid leave for parenting, pregnancy, and childbirth.

New Hampshire is displaying a similar level of interest in paid family leave as states across the nation explore and implement programs. A July 2016 poll conducted by the Feldman Group found 76 percent of Granite Staters support paid family leave and 19 percent are opposed.

Amanda Sears is the director of the Campaign for a Family Friendly Economy, which has worked to support HB 628 since it was drafted. Sears told NH Journal paid family leave has maintained a consistent level of support across individuals regardless of education level, political affiliation, race, and gender.

“Everybody has unexpected things happen to them and their families,” Sears said. “They need to maintain their ability to make ends meet when those things happen. Whether that’s the birth of a child, helping an aging parent needing help with recovery from surgery or someone getting injured themselves. Everyone has things like that happen eventually, so most folks have a strong understanding of the need to have financial security when something like that happens.”

Paid family leave also has a chance to make positive change in the battle against the opioid crisis, offering workers the chance to enter recovery without worrying about their employment status. Grandparents who are raising children due to the absence of parents adversely affected by the opioid crisis would also be provided short term leave to foster a stable environment in the interim.

HB 628 is different from the programs set up in other states since New Hampshire does not have a temporary disability insurance program to use as a base model. The New Hampshire Department of Employment Security, however, already collects data and payroll information to apply for federal grants from the Department of Labor, which is what could assist the establishment of a paid family leave program.

An aspect of the proposed legislation borrowed from enacted models in other states is the 60 percent wage replacement. This policy allows employees to take time off and address immediate concerns as well as maintain an incentive to return to work.

Christina D’Allesandro is the director of the New Hampshire chapter of MomsRising, a national paid family leave advocacy group. In an interview with NH Journal, D’Allesandro said HB 628 is the furthest a paid family leave proposal has ever advanced in the state legislature, with many lawmakers acknowledging it as a policy for the future.

D’Allesandro said studies have proven paid family leave’s beneficial value for not only employees but also businesses as they witness higher levels of productivity and job retention. The Urban Institute, a Washington D.C.-based think tank, issued a report in May which found 90 percent or more of employers in California “reported no changes or positive effects on employee turnover, profitability, and productivity.”

According to D’Allesandro, paid family leave has a broad impact which affects not only mothers but fathers, adopted parents and grandparents raising children as well.

D’Allesandro remains optimistic for HB 628’s future when it reaches a vote in January due its high levels of bipartisan support. The bill is slated to go through the House Finance Committee and potentially the Ways and Means Committee in order to revise details prior to a full House vote.

D’Allesandro said paid family leave will make a significant impact in the Granite State if adopted by legislators next year.

“When you introduce the fact New Hampshire would now have a paid leave program, you can do this and not lose your house,” D’Allesandro said. “You no longer have to make decisions between paying your bills and caring for your loved ones.”