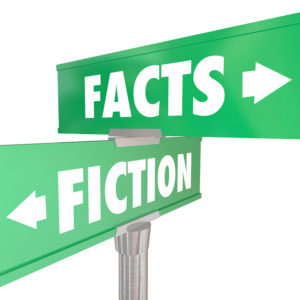 As the head of a nonprofit known for taking principled stands, I believe the truth is important. Foundational to our organization is the belief an informed electorate is critical to our republic. So, before taking a stand or sharing information, we also do our homework to make sure we know what we’re talking about, providing not only opinion but the facts needed to back them up.

Often, though, we find those facts really don’t carry the weight we thought they would. I can’t tell you how many times I’ve heard, “If people only knew “x,” they would understand they need to do “y,” but typically that has been far from the case.

I know as I write this that some readers will applaud what I have to say, while others have already discounted it. Those assessments won’t be influenced by the information I may share, or where it comes from. It will not be viewed as credible simply because of who I am and my own beliefs. It’s what researchers call confirmation bias. And, to be fair, this is not a condition limited to a given religion or political persuasion. Confirmation bias is a very human trait and, in these divided times, is impacting us more than ever before.

Psychology Today describes confirmation bias as “the direct influence of desire on beliefs.” In short, if we want something to be true, we hardwire that belief into our thinking as fact, accepting what supports it and rejecting anything that does not, however compelling it may be.

As a nation, we are greatly divided, and with that division comes markedly different beliefs and realities. Take social media. I’m not an expert on algorithms, but there are clear political demarcations. We tend to attract and interact with people who agree with us, creating an echo chamber of self-segregated and polarized newsfeeds. There is a certain attraction to limiting our interactions to those who agree with us, but when we do that, we never hear another point of view or learn data that would suggest something different than our world view.

In their book, The Enigma of Reason, cognitive scientists Hugo Mercier and Dan Sperber examine confirmation bias, actually proposing the term “myside bias,” finding that while their study participants were quite adept at spotting flaws in another’s argument, they were quite unable to see those same flaws in their own reasoning process —  even to the point of being highly critical of their responses when presented as the differing views of another.

There have been real negative impacts of our points of view creating a reality that informs our actions, especially in politics. Steven Sloman and Philip Fernbach, authors of “The Knowledge Illusion: Why We Never Think Alone” point out that, as social beings, we often rely on others’ knowledge of an issue to form our own political opinions. When those we listen to have no real factual basis for their opinion, ours is similarly baseless. “As a rule, strong feelings about issues do not emerge from deep understanding.”

So, who do we listen to?  Often, it’s media coverage that informs us. It’s one thing to be an individual with confirmation bias, but what of our news outlets? I think it’s helpful to understand the composition of today’s news media.

Investor’s Business Daily cites the results of a series of interviews of over 450 financial journalists nationwide by Texas A&M University. The journalists worked for such publications as The Wall Street Journal, the New York Times, Washington Post, and the Associated Press among others. Even in the traditionally conservative world of finance, actual conservatives were hard to find.  Fewer than one-half of one percent called themselves “very conservative,” while just shy of 4% defined themselves as “somewhat conservative,” for a total of 4.4% who hold right-of-center views. What might their confirmation bias be? By contrast, according to a 2016 Gallup Poll, 36% of Americans identified as conservative while 25% identified as liberal. It’s hard to make a case for objective and representative coverage of today’s issues with such a lack of media diversity and the views held by those covering the important issues of the day.

We’re only human. Isn’t it time to be willing to examine our own biases and the impact they have on our thinking, not only challenging our own thought processes, but those of the people and media we listen to?  For my part, I will continue to reach out to those who agree and may not agree with us, always with a desire to listen, learn and engage. I’ll continue to share our fact-based research and how and why we stand on the important issues impacting New Hampshire’s people.

Agree or not, I hope you’ll at least be willing to listen.