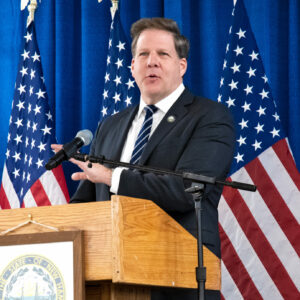 OPINION: Sununu’s State of the State? Good for Taxpayers, Bad for Democrats

While many New Hampshire politicos were watching Gov. Chris Sununu deliver his State of the State address, we were keeping an eye on state Sen. Tom Sherman (D-Rye).

When a president gives a State of the Union speech, one member of his cabinet is sent to an undisclosed location to act as the “designated survivor” should tragedy befall the Capitol. Sherman is playing that role in reverse:

He is the New Hampshire Democrats’ “Designated Victim.”

On Wednesday, Sherman — a medical doctor by trade — told radio host Jack Heath that, unless something goes awry, he is running for his party’s nomination to take on Sununu. He is unlikely to face any serious opposition, and  Sununu’s State of the State speech was yet another reminder why.

The new Quinnipiac poll provides a good prism. The voters’ top priorities are inflation/economy, border security, and COVID-19. Among independent voters, it is the same list, except inflation ranks even higher.

The top priorities among Democrats? Climate change and election law.

Sununu did not spend much time on either. Instead, he hammered away on New Hampshire’s stellar economic performance, as well as its success protecting people from COVID-19.

Sununu is a solid, though not inspiring, speechmaker. His strength is retail politics, his #603Pride schtick. But with an engineering degree from MIT, he knows how to use numbers. And the numbers he has to work with are pretty eye-popping.

“Today the Granite State is ranked as the freest state in the nation. We have the strongest economy in the Northeast and the fastest population growth in New England,” Sununu said. “We are number one in America for public safety, first in economic freedom, and we continue to have the lowest poverty rate in the country, with some of the highest average wages.”

Two weeks ago, new projections for the current fiscal year were released showing revenue estimates are $283.8 million over plan.

“A few years ago, we would get excited over $25 million in surplus,” Sununu said Thursday. “Now we estimate we’ll see 10 times that amount.”

And despite the non-stop-panic media coverage of COVID-19, New Hampshire has the eighth-lowest rate of deaths attributed to the virus — despite having the eighth-oldest population in the nation.

“New Hampshire has consistently ranked among the safest states in the country for COVID — now having one of the lowest hospitalization rates in America — and we did it without sacrificing the freedoms we hold dear,” Sununu said.

Talking to Jack Heath, Sherman went out of his way to state emphatically that he does not support a state income or sales tax. But is promising not to do something your party has repeatedly tried to do enough to compete with this:

“In just the last year, we cut the statewide property tax by $100 million to provide relief to New Hampshire taxpayers,” Sununu said. “We cut the rooms and meals tax — while still increasing revenue sharing with municipalities by 45 percent. We began the permanent phase-out of the interest and dividends tax for retirees.”

Meanwhile, what are Democrats and Dr. Sherman running on? Abortion and ending school choice.

Good luck with that.

The Chris Sununu on stage Thursday was the Sununu Granite Staters like: Smart, friendly, optimistic and offering solutions. Even if you don’t like some of the specific ideas, it is hard not to give the guy credit for trying.

Sununu also gave a “reverse shout-out” to the sort of politics Granite Staters don’t like.

“The citizens of our state did not hire us to just be political ideologues, they hired us to do a job,” Sununu said. “If you are here to relish the attention over a fight that gets us nowhere, I have no patience for you.  I have never and will never let our state be hijacked by these radical elements.”

Sherman heard it and thought… well, one can only speculate.

Sununu’s speech was cut short when state Rep. Ralph Boehm, a seven-term Republican representing Litchfield, suffered a health emergency and collapsed. Based on media reports, Boehm is going to be fine.

For Sherman’s political fortunes, the prognosis isn’t nearly as positive.