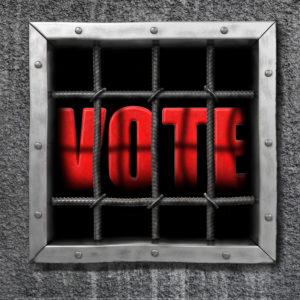 On September 9, 1971, complaining of brutality and unsanitary conditions, the inmates of Attica State Prison in upstate New York revolted, wrested control from the prison guards, and took hostages. After 28 days of negotiations, all inmate demands were agreed to but one–amnesty for those who had revolted. These inmates argued that they were forced to take action because, having exhausted every lawful avenue available to them, there was no effective alternative to seek redress of serious and legitimate grievances.

Among their negotiated agreements was the right to vote.

Then, in a much-criticized move which permanently tarnished the career of one of the great political leaders in modern New York history, Gov. Nelson Rockefeller called in troops to forcibly retake the prison and 43 people, mostly prisoners, were killed. Simply giving these men a voice at the ballot box might well have forced elected officials to pay prompt attention to Attica and avoided this human tragedy. Instead, the events at Attica State fanned the flames of hatred and mistrust in prisons and in communities of color across the country.

As an activist for prison reform attending a nearby university at the time of the standoff, I was one of a group of student activists who met with mothers of Attica inmates who worried about the potential of a deadly outcome. The insurgents were blacks, the guards they’d taken hostage were white. We were privileged white kids from far away suburbs who weren’t even old enough to vote ourselves.  These prisoners’ families were inner-city minorities, but they believed we were the nearest thing they had to a connection with the white political establishment, so they begged us to do whatever we could to urge a peaceful resolution to the crisis.

In the end, however, our political action as non-voters went equally unheeded. We watched the news coverage as the horror of the retaking unfolded. I was deeply affected by what I believed to be one of the greatest racially motivated massacres in modern American history. The attack, replete with helicopters, tear gas, and assault rifles, looked like something from Vietnam.

Many years later, I was a frequent visitor to prisons while representing inmates as a criminal appellate attorney. I also have a family member who works in a prison every day.  From the resulting evidence I have garnered, far too many prison inmates today have little to no sense of loyalty to American society, but rather, an unhealthy allegiance to their respective gangs. The gang culture is all-encompassing and it is dangerous for both inmates and prison staff. Too many inmates, both white and of color, are members of either racist or hate-based gangs.

While their lawyer, I tried to highlight for inmates their equal ownership of the fundamental rights of all Americans–the right to a fair trial, to effective counsel, and against self-incrimination, among others–which few had ever experienced or understood. For more than a few, it instilled a sense of dignity which they heretofore had not known. Win or lose, the process of exercising those fundamental rights before the high courts often helped illuminate for them their lost connection to fellow members of their ultimate gang, the one to which we all belong, that American brotherhood of unalienable rights.

We should, therefore, never underestimate the power of being “woke” to our collective democratic heritage. In fact, so valuable was a similar membership in a democracy to the great philosopher Socrates that he chose death by poison hemlock rather than be banished as a citizen of the world’s first democracy, Athens.

To protect a right to a redress of grievances, to lend dignity to the internal prison culture, and to promote the ultimate rehabilitation of inmates, most of Europe and Canada afford the right to vote to every prisoner. So do the states of Maine and Vermont, with the only stipulation being they cannot vote in the local election where the prison lies so as not to have an inordinate impact on that community. Perhaps it is no coincidence that these two states have the lowest crime rates in the country.

Given that the U.S. incarcerates more people than presently live in the state of Rhode Island, the vast majority of which are coming back out some day, maybe we ought to think a little harder about giving them what might be the single greatest leg up on eventually becoming a civilized citizen, the right to vote.

As the Supreme Court has already affirmed that a prisoner does not give up his citizenship or his First Amendment rights by being incarcerated, voting inmates will have the right to access political information and will undoubtedly attract some attention from those who run for office. The resulting opportunity to learn how their government works, learn their Constitutional rights, and participate in democracy, just may lead some to don that cloak of dignity and pride, in common with their keepers, and every American.  And just perhaps they will sooner shed the brand stamped on their forearm by the gang culture that led them to prison, exchanging it for the deeper one they internalize in common with the rest of us.

Many of us outside the prison walls are fond of boasting about our democracy, its hard-earned heritage, and its unique role in history. Our greatest presidents have even called upon us to carry its torch to light the rest of the world. How incongruous of us, then, to deny the right of participation in that democracy to our own citizens who, although incarcerated, will largely be returning to our midst, and still expect them to become responsible members of American society.

There is much to gain and little to lose in finally joining the rest of the civilized world to give them the vote.