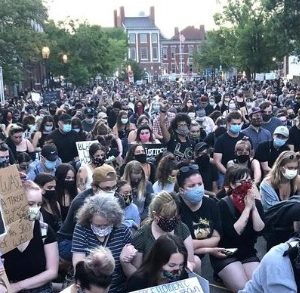 More than 1,000 people gathered for a Black Lives Matter protest in Portsmouth, NH on June 4th, 2020.
[IS] Opinions

Ramsay Dean was one of the organizers of the June 4 Black Lives Matter protest in Portsmouth. Below is the text of his remarks, as provided to NHJournal by Mr. Dean.

Good evening everybody! My name is Ramsay Dean, I am a local resident of Portsmouth and I’ve lived in the Seacoast area for my entire life. I am also the organizer of tonight’s Black Lives Matter protest. I want to thank you all for coming out tonight to support the Black Lives Matter movement.

Looking out at all of you, I feel emotional. The size of this crowd speaks volumes. We are the majority. And as the majority, it is time to reclaim our voice. We are all here for one shared common goal: to end white supremacy and the violence and murder that is being inflicted upon black communities by the very people who are supposed to protect and serve us.

Before we begin, I want to take a few minutes and discuss why I planned this protest. However, before I can do that, I have to take a minute and acknowledge some of my own privilege as well as some recent personal experiences with racism.

Growing up, I received a good education; living in N.H. we have one of the best public education systems in the nation. From there, I was fortunate enough to be able to get a college education, and obtain a master’s degree. For many black and brown people across the country, their school systems are underfunded and sub-par, to say the least.

And that is putting it nicely, trust me. These children are not set up for success at a young age, and the systemic oppression starts right from the get-go for these black and brown children when they are denied access to an adequate public education.

I also have to acknowledge that I am what some people call “light skinned.” Depending on the person, social context or situation, I can be perceived by others as either white or black. Research shows that people with lighter skin and quote unquote “whiter” characteristics receive higher wages, more education, and shorter prison sentences. They even have better physical health, and are perceived as more attractive, happier and more competent by others.

Colorism is a real thing, and as I stand here looking out at all of you, and I see many of my black peers in the audience who are darker than I, and maybe have struggled more than I, I see you, and thank you for letting me be our collective voice and speak on behalf of our community. I am truly honored to be here, leading this fight today in my community, which I love so much.

Growing up in this privileged bubble, I found it difficult to understand the concept of racism and oppression as a child. My mother, who is a black woman, would always tell me her personal stories of racism, and I struggled to understand her point of view. “The world is different now” I would tell myself.

Well, I can tell you that standing here today, older and wiser than that young, naïve version of myself; hindsight is 20/20, and in the year 2020 I can tell you that I truly now have 20/20 vision when it comes to the racism that is all around me. Racism is woven into the very fabric that is America, and I am sorry to burst people’s bubble (including my own) but that includes New Hampshire.

All Lives Matter; Protests Don’t Work; Oh, I didn’t realize the pandemic was over just because you want to protest; What are people protesting about anyway, the officer was arrested already; Blue Lives Matter; aren’t you worried about inciting violence? I am sick of seeing all of this crap on social media.

These are all statements that have been directed towards me over the past four days, since I publicly announced this protest. Do you think any of these statements came from a person of color. I don’t really think I need to answer that question.

If you do not think racism is alive and well in N.H., take a look at your social media feeds. I would be willing to bet that almost everyone in this audience has witnessed some sort of “white lash” against this movement on their feeds.  I can tell you personally, I have deleted more people off of my social media in the past week then you can imagine. And just know, if I deleted you, it was not an accident, it was personal.

Black people are dying. Actually, let me rephrase. Black people are being MURDERED. Now put a PERIOD after that and close your mouth if what you have to say next does anything other than support ending this systematic genocide of our people.

Saying “All Lives Matter” is like going to the doctor with a broken arm, and having the doctor take a look and shrug and say “meh, but all bones matter.” Well duh, of course all bones matter. But can you please help me fix the bone that is broken, in pain and under duress.

I will say it over and over and over again until our oppressors are deafened by the sound of my voice. The fact that you are offended just proves the point; we need to keep saying it. And we will continue to say it until it becomes the TRUTH. And we will know it is the truth, not because white people said so, but because we’ve seen the type of reform and behavior change that we are asking for.

Until Black Lives Matter, all lives do not matter.

So, protests don’t work you say, and what are we protesting for you ask? I want to take a moment and acknowledge recent victories. The former Minneapolis police officer who pressed his knee into George Floyd’s neck for over eight minutes, murdering him, was charged yesterday with a more serious crime of second-degree murder. The three other officers on scene during his killing were charged with aiding and abetting second-degree murder.

So I think protests do work, how about that. While these are positive developments, none of this will ever bring George Floyd back, or heal his family and loved ones who will have to live with this pain for the rest of their lives. We also must remember that while we may have won these small battles, we are far from winning the war.

We must continue to protest and demand change. History has shown that juries are hesitant to convict in these types of cases. And let’s not forget that in black and brown communities, these types of violent murders are happening each and every single day; George Floyd’s just happened to play out for a national audience.

So how do we make real change?

Stop allowing the police to police themselves. This clearly does not work. Body cameras, implicit bias and cultural sensitivity training  is all great, but what ends police violence is ACCOUNTABILITY. Demand that your elected officials implement systematic methods for policing the police; and make sure you give those methods the power, resources, tools and money needed to do their job effectively.

On that same note, Pay close attention to your elections. County or district attorney, attorney general, sheriff, etc. In many jurisdictions, these are elected officials. We should be paying just as much attention to these candidates as we do to candidates for mayor, governor and Congress. If these officials are not holding police officers who commit murder accountable, VOTE THEM OUT!

Lastly, don’t stop saying George Floyd’s name. We will not rest until justice is served, and that means a conviction for all of the officers involved, and sentencing that is as unforgiving and severe as will be permitted under Minnesota law.

Thank you everyone for coming out tonight to support this very important cause. I am humbled and honored to be a small part of this revolution.