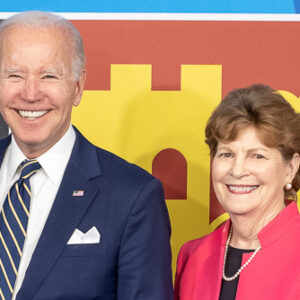 News came Tuesday of yet another pleading letter from desperate New Hampshire Democrats to President Joe Biden, begging him to restore New Hampshire to its rightful place at the top of the DNC’s primary calendar. Like a previous letter, signed by Sens. Jeannie Shaheen and Maggie Hassan, it was full of empty arguments and hollow warnings that Biden easily dismissed.

Sorry, NHDP Chairman Ray Buckley, but this time groveling won’t work. (Which, according to some D.C. political players, is Buckley’s finishing move, alas.) What New Hampshire Democrats need to do is fight.

“We are especially concerned about how this will impact your re-election,” they wrote, suggesting that killing the FITN might cost Biden the Granite State in November 2024. “These four [electoral] votes could be the deciding factor in 2024. Unfortunately, they could now be at risk.”

Please. From Clinton through Biden, Democrats have lost New Hampshire’s electoral votes just once — the 2000 George W. Bush fluke. The midterms were just the latest reminder of how much Granite Staters hate voting Republican for federal offices.

New Hampshire Democrats aren’t going to vote for Donald Trump or Ron DeSantis because they’re butt-hurt about the DNC calendar. What utter nonsense.

And then there’s the fact that thanks to a decade of identity-politics attacks against the “too White” New Hampshire electorate, most of the party’s voters are ambivalent about the state keeping the first place in line. For years, national leaders like the previous heads of the DNC have said explicitly that New Hampshire’s Democratic primary voters are too White to be trusted with their important role in the primary. And for years, New Hampshire Democrats like Shaheen and Hassan, and Buckley remained silent, unwilling to buck the “woke” trend.

And now, like the college-educated suburbanites they are, the White guilt of the Granite State Democratic base is more powerful than their feelings for the primary.

The authors also argue bumping New Hampshire could make it more likely Biden faces a serious primary challenger next year. “It is safe to say that this is likely not how you would like to kick off your re-election and it would only fuel chatter that Democrats are divided and in disarray,” they wrote.

Once again, the idea that Biden will underperform against a Gavin Newsom or Pete Buttigieg because the primary isn’t DNC-sanctioned is hard to take seriously.

Folks — Biden already came in fifth. He has run for president three times and been a flopperoo in the Granite State every time. The only way to ensure he won’t lose the 2024 New Hampshire primary is to not let anyone else on the ticket, up to and including Vermin Supreme and George Santos (R-N.Y.)

If Biden’s weakness inspires a serious primary challenge, it won’t be because the challenger thinks they can win New Hampshire.

All of this whining and weeping and “But, Joe, we thought you were our friend” from establishment Democrats is a waste of time. An embarrassing, degrading waste at that, one that makes New Hampshire look even smaller than it (electorally speaking) already is.

Worse, it’s totally unnecessary. This fight has always been the New Hampshire Democrats’ to lose. They’re the ones choosing to lose it.

Forget their failure to address the “too White” slur about New Hampshire voters that’s become conventional wisdom at the DNC. This entire fight can be won by simple math.

Biden and the Democrats have a one-seat majority in the U.S. Senate. New Hampshire has two Democratic U.S. senators.

Does Biden really want revenge on New Hampshire Democrats more than he wants his nominees to get through the Senate? Majority support for his legislative agenda? Two “no” votes from New Hampshire, and Biden might as well be back in Delaware, cleaning his Corvette with classified documents.

It can’t be done? Wrong. The question is whether you have leaders with the strength and skill to do it.

Imagine for a moment what true leaders would do with this advantage. Would Sen. Chuck Schumer give up something this key to his state? Or would he let Biden know he was going to have a very bumpy legislative session if Schumer didn’t get what he wanted? Would Sen. Joe Manchin write letters, or would he stop legislation? Sen. Kirsten Sinema — whining to the DNC or talking turkey to Biden?

If you’re old school, think about what Democrats Harry Reid and Robert Byrd would be doing in a case like this. Think they’d be writing letters? They’d be using their power to make or break a Democratic majority to break Biden’s…. well, let’s just say the president would be uncomfortable.

And where are New Hampshire’s U.S. senators? With two irreplaceable votes and the death of the primary looming? At the keyboard yet again.

If Shaheen and Hassan believed half of the rhetoric they throw around about “putting New Hampshire first,” they would use their votes to keep the primary in place. But they won’t, because as they’ve shown repeatedly while in office they are Democrats first.

So, they’ll keep writing letters and making excuses and hoping Biden makes it to 2024 and there won’t be a meaningful primary and their failure won’t matter. And then they can hope it somehow gets fixed in 2028.

Don’t count on it. We have the First in the Nation primary because of the steel-spined courage of former Secretary of State Bill Gardner, who understood that if the magic was ever broken the show would be over. New Hampshire would never get the FITN back. And so, he never backed down.

Granite State Democrats, Buckley and Shaheen in particular, have already given up. They won’t fight their party’s “woke” leadership, they won’t defend the character of their voters and they won’t put their political assets on the line.

The least they could do is stop the begging. Let’s just get this over with, and hope the GOP can keep the FITN magic alive.