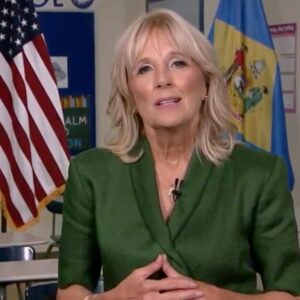 “The diversity of this community, as distinct as the bogedas [sic] of the Bronx, as beautiful as the blossoms of Miami, and as unique as the breakfast tacos here in San Antonio, is your strength.” — First Lady Dr. Jill Biden speaking at the “LatinX IncluXion Luncheon” in Texas.

On Monday, just a few hours after Dr. Jill Biden waxed poetic about Hispanics and breakfast foods, the Democrat-controlled Portsmouth City Council voted 8-1 to kill Columbus Day and replace it with Indigenous People’s Day. Previously, the liberal seacoast community had been willing to accommodate a celebration of both native peoples and the European explorer who made his way to the Americas.

“Continuing to celebrate Christopher Columbus, who committed serious atrocities and massacres among the indigenous populations he encountered, is unjust and cruel,” said 16-year-old Portsmouth High student Emily Stokel during Monday’s council meeting. Stokel is one of the students who authored the proposal to “permanently refer to the holiday as Indigenous People’s Day (not alongside Columbus Day) on the city calendar.”

Just a few weeks ago, New Hampshire Democrats like U.S. Sen. Jeanne Shaheen and state party chair Ray Buckley were in D.C. imploring the Democratic National Committee not to take away the “First in the Nation” primary.

All three stories share the same antagonist, the same source of the problems Democrats are trying to solve.

Why is the Granite State’s first-in-line primary slot in very serious danger of going to another state? Because New Hampshire is “too White.” That is not a subtle hint or subtext. For years, prominent Democrats have been making this accusation about the state’s Democratic electorate, and it is almost never challenged by local party leaders. Instead, Granite State Democrats appear, at least in part, to agree.

In last month’s UNH Survey Center poll, just 45 percent of the state’s Democrats support the “First in the Nation” primary law that has kept New Hampshire at the front of the line.

But now, it is slowly dawning on Democrats that stripping New Hampshire voters of this special status over the fact that they are “too White” might come with negative political consequences.

“We’re seeing a growing narrative that blames Democrats for jeopardizing New Hampshire’s first in the nation status,” Shaheen told the DNC last month. “With such a tight Senate race and newly redrawn congressional maps, I fear stripping New Hampshire of its long-held position could be consequential.”

The same is true with Portsmouth’s vote to throw Columbus under the “woke” bus. In a recent op-ed for the Portsmouth Herald, former city councilor Charles A. Griffin points out that “eliminating Columbus Day would be an act of exclusion, not inclusion, and would also fail to recognize the diversity of opinion that exists in our community regarding this day. However, retaining Columbus Day with Indigenous Peoples Day creates a win-win situation.”

He is right, obviously. But he is also White. And so was Columbus.

“Our intent truly is not to put two groups against each other but to heal and embrace our native American population as part of Portsmouth,” Stokel said on Monday. Unfortunately for people like her, that “healing” means “embracing” Columbus by the scruff of the neck and flinging him into oblivion.

“It does not feel right to honor someone who has inflicted so much harm on people who such a major role in the fabric of the history of our city,” Stokel added.

And so Whitey’s gotta go.

Now, it is no secret White people have done terrible things in history. And perhaps, as Critical Race Theory scholar Ibrahim X. Kendi writes — in books found in many New Hampshire public school libraries — White people are uniquely evil, and the only way to achieve justice is to make them the brunt of race-based discrimination. That is a complicated philosophical issue with great nuance.

But the political math is easy and obvious: More than nine out of ten votes in the New Hampshire midterm election will be cast by White people. Branding your party as one where these voters aren’t welcome isn’t smart politics.

Of the many dismal numbers in the latest New York Times/Siena College poll, none is more stark than this: Biden’s approval rating among White voters is underwater 65-30 percent. Among the Democrats’ alleged “target demographic,” White, blue-collar workers (people without college degrees), Biden’s at a devastating 75 percent disapproval. Just 20 percent of non-college-educated White voters like how he is doing his job.

Numbers like that are how Democrats lose the New Hampshire Second District race.

This brings us back to Jill Biden’s breakfast food faux pas, for which she has already apologized. Obviously, she was pandering — which just serves to re-emphasize the message that Democrats are obsessed with identity politics (as long as you have the right identity.) She also made it at an event called the “LatinX IncluXion Luncheon.” As multiple polls have shown, Hispanic Americans never call themselves “Latinx.” They find it off-putting. It is a word being promoted by far-left — and, ironically, overwhelmingly White– progressives, the sort of fringe extremists who call a U.S. senator “transphobic” for saying he doesn’t believe men can get pregnant.

For millions of middle-class, average — and yes, through no fault of their own, White — Americans, these appear to be the core concerns of the Democratic Party: Pro-abortion, anti-gun, and obsessed with identity.

How do any of those concerns overlap with “I can’t afford to fill up my gas tank” and “my school’s crappy Zoom classes have left my kids a year behind?”

The entire point of the Biden presidency before he was sworn in was to offer blue-collar White voters a Democratic option appealing enough to pull them away from President Donald Trump. It was close in Pennsylvania and Wisconsin – but it worked.

The entire point since he took his hand off the Bible and put it on the “Kill Keystone XL Now” button has been to drive these same voters away. In states like Michigan and Georgia, where White voters make up about 65 percent of the electorate, that is bad politically.

In 95 percent white New Hampshire? It is sheer electoral idiocy.

Democrats don’t need to embrace affirmative action for white people, or hand out government goodies to “voters of pallor.” (That is what EV tax credits and student loan forgiveness are for).

Even the White ones.