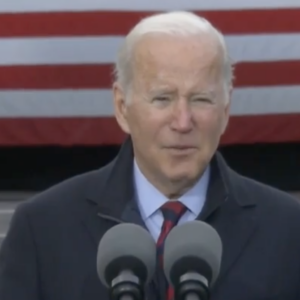 Opinion: Biden’s Visit To Small, Rickety Bridge a Perfect Metaphor for His Presidency

The Green Bridge in Woodstock, N.H. is not an impressive sight. A small, insignificant structure — it’s only 30 feet wide and about half the length of a football field —  it isn’t economically vital or historically significant.

In other words, it was the perfect place for President Joe Biden.

New Hampshire Public Radio described the Woodstock bridge as “rickety,” and that’s a pretty good description of the Biden presidency at the moment as well. Everything about Biden’s visit to New Hampshire Tuesday, like the sad, little bridge where he gave his speech, felt patched together.

Unfortunately, the $1 trillion in infrastructure spending won’t fix that, either.

As a light snow fell around him, Biden stumbled over the names of the candidates he came to boost (“Amy Kuster”), stumbled through the facts he came to pitch and gave the sort of stumbling delivery we’ve come to expect from a president who turns 79 on Saturday — just three years younger than “red-listed” bridge he came to rescue.

About halfway through his speech, Biden acknowledged the modesty of his message.

“This isn’t esoteric. This isn’t some gigantic bill,” Biden said. “It’s about what happens to ordinary people, conversations around kitchen tables — as profound as they are ordinary.

“How do I cross the bridge in a snowstorm?” Biden asked. “No, really — think about it. What happens when the bridge collapses and there’s a fire on the other side? It’s going to take 10 miles longer to get to the fire. What does it mean if a school bus or logging truck can’t cross? I mean, this is real stuff, folks.”

If you’ve listened in to any “conversations around the kitchen table” in New Hampshire lately, it’s likely you haven’t heard much about ten-mile detours or rickety bridges. Instead, you’ve probably encountered table-pounding anger over rising prices. Over reports the cost of heating a home in New Hampshire could nearly double this winter. And over the general frustration of dealing with a COVID crisis that President Biden promised to end but instead has mishandled.

Today, Biden’s pushing mandates to get workers fired from their jobs, COVID restrictions are once again on the rise, and the virus isn’t close to being “shut down.” The president who embraced an FDR-style re-making of America is instead standing in a rural New Hampshire outpost promising a few, small repairs.

This national moment require far more. Inflation hitting 30-year highs is a huge problem that can endanger the entire economy. And while it’s not the Great Depression, the “Great Resignation” — Americans quitting their jobs in record numbers amid a worker shortage crisis and supply-chain crunch — is a massive economic threat as well.

But other than the price tag, there was nothing “massive” in Biden’s message. There is no obvious connection between the roads, bridges and broadband he was bragging about on the bridge, and the gas prices and empty shelves folks are worrying about back home.

“I’m paying $4 a gallon for propane, which is $2 a gallon in most places, to heat my home. I’m on a fixed income, I’m on Social Security, and the way things are going right now, I’m going to have to go and get help to heat my home this winter.”

Sure, for a small state like New Hampshire, $2 billion in new federal funds is a lot of money. And Granite Staters stuck with lousy cell service will be happy for any improvements.

But nobody in New Hampshire will go to bed tonight worrying about potholes and bridge repairs. Not when inflation is rising faster than wages, and store shelves are as empty as Biden’s promises that another trillion or three in federal spending won’t send prices even higher. Not to mention 2 million illegal border crossings, the Afghanistan fiasco, the threat from China, etc. etc.

“When you see these projects starting,” Biden said as he stood on that small, rickety bridge, “I want you to feel what I feel: pride.”

Americans would like to feel that way when they see their president, too.

At the moment, alas, that appears to be a bridge too far.