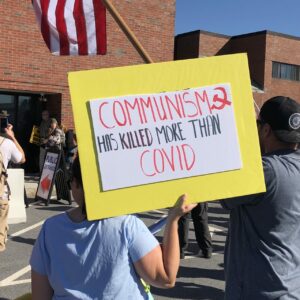 COVID-19 may be a virus, but it has also mutated into a potent strain in American politics, from masks to remote learning to vaccine mandates. So it’s no surprise that there’s a major political fight in Concord over a bill to ban businesses from being able to require employees to get vaccinated.

In a previous era, small-government Republicans would have opposed a law like this on free-market principles: business owners, not government, should decide how to run their workplaces.

Those days are gone.

But for pragmatic fiscal conservatives, there’s still a sticking point: Who’s going to pay the $2.3 billion this bill could cost local hospitals and nursing homes in New Hampshire?

HB 1210 would require employers to give employees a virtually automatic exemption from vaccination requirements by creating a non-religious “conscientious objectors” status. That’s in addition to the religious and health exemptions the state already recognizes.

More importantly, they’re also recognized by the federal Centers for Medicare & Medicaid Services. This is important because, in order to receive Medicare and Medicaid cash, hospitals and nursing homes, etc., must comply with CMS regulations.

For a small state like New Hampshire, $2.3 billion out of the healthcare budget is what Sen. Evertt Dirkson (R-Ill.) used to call “real money.”**  To put that in context, the entire state business tax collection in 2021 was about a third of that amount.

Are self-declared “medical freedom” legislators ready to vote for a 300 percent tax hike on Granite State businesses to protect the “right” of an unvaccinated nurse to work around elderly patients in an ICU? Patients whose healthcare bills are no longer being paid for by Medicare?

Supporters of this new business mandate say medical freedom isn’t for sale. “We’ve just got to do what’s right,” they insist. And there are sincere, heartfelt arguments on HB 1210’s behalf.

But “sincere and heartfelt” won’t pay the bills.

The fringe activists at ReOpenNH, which has promoted anti-vax conspiracy theories, have launched a campaign targeting Republicans, hoping to pressure them into backing the bill. An out-of-state organization, Young Americans for Liberty, has joined in.

That’s all part of politics. But so are elections. And GOP legislators might want to keep in mind that they have to face local voters, not out-of-state activist groups, in November.

This year Democrats are going to be more desperate than ever for an issue to run on. They’re looking for anything to distract from Biden, inflation and the cost of filling up the gas tank.

So House and Senate Republicans are going to give them the gift of a vote to strip New Hampshire seniors of billions in Medicare funding? Imagine the mailers featuring photos of local county nursing homes with Granny parked outside holding a “Rep. X voted to take away my Medicare funding” sign.

Some legislators are saying privately they think this is a free vote, because the bill will either die in the Senate or get vetoed by Gov. Chris Sununu.

Others say it doesn’t matter what they vote for because Medicare and Medicaid will continue to send the funding, no matter what. That’s putting an awful lot of trust in the Biden administration, which might see some value in attempting to embarrass Republican lawmakers.

But it doesn’t matter what actually happens. Once their vote is cast, those legislators are handing their opponents a made-to-order attack ad.

At the very least, supporters of HB 1210 may want to explain where the money to replace lost CMS funds is coming from before they pass the bill.