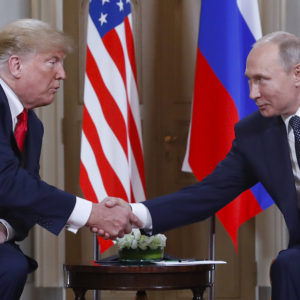 An Open Letter to the RNC: Defend America and Denounce Trump

The Republican Party has always promoted the principles of law and order, a strong national defense and the advancement of freedom.  President Trump repeatedly denigrated each one of these Republican values, and in spectacular fashion, at his summit with Russian President Vladimir Putin in Helsinki.

Putin is one of democracy’s greatest adversaries.  He murders his political opponents, invades his neighbors, imprisons dissenters and journalists, supports the brutal regime of Bashar al-Assad and is widely blamed for shooting down Malaysia Airlines Flight 17 four years ago.  And, as everyone (with the possible exception of our president) knows, he interfered in our democratic process and attacked its institutions during the 2016 election.

And yet, when confronted with the opportunity to stand strong against Putin and in defense our American democracy, President Trump folded.  Instead of confronting the bad actions of Russia, he blamed America for the “bad relationship” between the two nations, and called a legitimate probe into Russian election interference a “wedge” between Americans.  The President was weak, he was wrong, and he directly undermined the advancement of freedom and liberty in the world.

His alleged retraction the next day, with its hostage-tape feel and convoluted, tortuous explanation, has only made things worse. Which is why it’s time for the Republican Party to act.

As a former State Party Chairman who served on the Republican National Committee for four years, and on the RNC Executive Committee for two years, including during the 2016 cycle, I am familiar with both the influence–and the limitations–of the organization that provides national leadership for our party.

This week, the RNC gathers in Austin, TX for their summer meeting. Among other things, they’ll be choosing a city for our party’s 2020 convention. When they meet, the national committeemen and women and state party Chairs from GOP organizations across the nation should pass a resolution  that forcefully and unequivocally denounces Russian interference in the American electoral process, and rejects the president’s claims of moral equivalency between America’s democracy and Putin’s thuggish regime.

The Republican National Committee does not set policy. It certainly does not have the authority to tell a President what to do.  Traditionally, it is the organization that supports and defends our party’s principles and the candidates who advance them, including—until now–the President.

Unfortunately, it has become impossible to defend both the President and Republicanism at the same time.  Which is why the RNC, as an institution, must speak up on behalf of our party and its values.

The RNC must remember that the GOP is not a party of one.  There are many Republican leaders, elected by Republican voters, who stand in defense of Republican values with great courage and determination.  They, and their Republican supporters, are not enemies of the party.  Rather, they account for millions of votes without which Republicans cannot win.

As a former party chairman myself, I have a great deal of respect for the activists who volunteer their time to the party through their service in the RNC.  I realize that this president has presented them a challenge unlike any other they’ve ever faced.

I also know that, when Donald Trump was declared the “presumptive nominee” by Reince Priebus in April of 2016, there were many among my colleagues at the RNC who responded with private despair.

It is time for that private despair to become a public denunciation. Every member of the RNC has an obligation to not just defend the President, but also to preserve and advance the core principles of the party we love.  It’s not easy, and it will take courage.  But I’m afraid that if our leaders can’t find that courage today, we will lose our party forever.