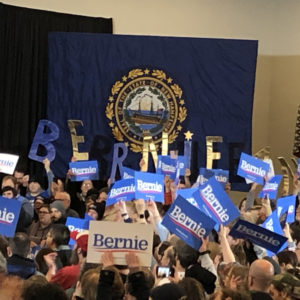 In a recent opinion column for Bloomberg, Jonathan Bernstein seems to think Bernie Sanders is finished based upon recent polls and his own analysis of other “sophisticated” political punditry, as he terms it.  But I refer Bernstein to that wisest of pundits, Chico Marx, who immortalized this time-tested proverb in Duck Soup: “Who you gonna believe, me or your own eyes?”

As a committed Bernie partisan in northern New Hampshire, here is what I see with “my own eyes.”

First of all, as Bernstein acknowledges, Bernie is indeed second in all the polls, both in early primary states and nationally, and he is universally popular with Democratic voters. These are hugely significant factors. Because Bernie’s platform is the best known among all the candidates, being the same one he drove home in his last campaign, people know it by heart. Most important, as Bernstein notes, Democratic voters overwhelmingly approve of it. That is why most of the Democratic presidential candidates parrot Bernie’s themes in their stump speeches.

It is Bernie’s progressive agenda that accounts for much of the surging popularity of the candidate perceived as the most politically in sync with him, Liz Warren.  Her coined phrase, “I’ve got a plan for that,” would be more accurately labeled, “I borrowed most of Bernie’s plan for that.” And it certainly hasn’t hurt Pete Buttigieg to be known for having received a prestigious award from the Kennedy Library Foundation for his essay on why Bernie Sanders is most deserving of recognition as a “Profile in Courage.”

What Bernstein does not see, however, is that voters have not yet explored the real policy distinctions between Bernie and the “Bernie-wannabees.” In part, that is because they use the same buzzwords to describe their positions, like “Green New Deal,” and “Medicare for All,” a “right to education,” and a “right to health care,” etc. Once debates and forums begin to reveal the vast gaps between Sanders and other progressives on major issues, they will begin to realize that, with regard to at least the big three domestic issues at the heart of the progressive agenda — climate action, health care, and education — Bernie is dancing alone at the pinnacle of popular sentiment.

Bernie’s climate action plan is rated by Greenpeace and other environmental groups as tops among the leading candidates. Bernie is the only candidate pushing for a pure “Medicare-for-All” health insurance plan that does not rely upon a bridge program involving private insurers and big pharma. Moreover, Bernie is the only candidate advocating for completely tuition-free education, funded by a tax on unbridled Wall Street traders who got bailed out after causing the 2008 crash.

Upon ferreting out the incrementalism underlying the positions of the copycats, inevitable with the further scrutiny the debate season will bring, Bernie, the author of real change, will re-emerge among progressives. It is worth noting that, as of this date in 2015, there were five Democratic presidential candidates and Sanders was trailing Clinton by 37 points in New Hampshire according to Real Clear Politics’ averaging poll. Seven months later he won by 22.

Joe Biden, the current polling frontrunner, does not belong to this group and doesn’t have a single progressive arrow in his quiver. This despite calling himself a “progressive,” and despite unveiling a new climate action plan that adopts progressive buzzwords. That plan, like much of Joe’s platform, is lifted mainly from industry-funded organizations, in this case, one dedicated to keeping fossil fuels in the energy mix by focusing on “carbon capture” instead of renewables.

Joe hardly talks about an agenda on the stump, just fans the flames of fearing Trump. Bernstein seems not to see that Joe’s lead now has everything to do with the mantra being drilled into the public discourse by corporate media, that only Joe can beat Trump (failing to note that Sanders also beats Trump in nearly every national poll). He seems not to see that it’s also driven by nostalgia for the Obama years when civility and dignity governed presidential behavior.

But as Trump’s favorability further declines as the consequences of his disastrous economic, tax, and trade policies become evident, and as more of his profiteering at taxpayer’s expense gets exposed, Bill Weld will begin to appear as a viable Republican nominee. That’s when fear of Trump will be replaced as a motivator by the real change that Democratic voters want. When that occurs, the progressives will be the beneficiaries, with Bernie, the architect of that change, leading the pack.

Other candidates come through New Hampshire’s north country with much advance notice, as did Joe Biden and Liz Warren have done recently, yet they barely fill Berlin City Hall Auditorium with a capacity of 150.  Meanwhile, in the half dozen or so events Bernie has held downstate, crowd response has been off the charts.

We Sanders volunteers in northern New Hampshire have no available venues that can accommodate such crowds. We will figure something out, but you can bet it will be an eyeful when Bernie finally arrives. Mr. Bernstein is invited to come see with his own eyes whether Bernie is indeed “finished.” I suspect his eyes won’t lie.

Perhaps most striking of all observable facts surrounding the Sanders campaign, Bernie has signed up thousands of New Hampshire volunteers, and well over a million nationwide, 25,000 of which are in Iowa, alone. If each Iowa volunteer brought just three Berners into the caucus with them, Berners would comprise the majority of the expected turnout. In a multi-candidate field, that bodes very well for finishing first, not being “finished.”

Bernie has the volunteers, he has the money, and he, alone, shares the popular vision of the majority of Democratic voters. As the impending debates lead the media to cover real policy distinctions instead of just the horse race, and once the fear of Trump gives way to what Democratic voters affirmatively want to vote “for,” Bernie, the agent of real change, having the most resources, will be poised to win. But don’t believe me. Watch it happen.