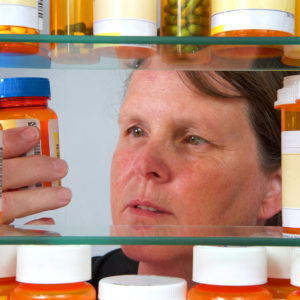 On Saturday, the War on Opioids Comes to Your Medicine Cabinet

Could the solution to New Hampshire’s opioid problem be as simple as kitty litter and a plastic bag?  Not entirely. But this weekend, Granite Staters will be reminded that it’s a start.

Saturday, October 27th, is National Prescription Drug Take Back Day, a day to point out the dangers that lurk in a place as innocent as your medicine cabinet, and the solution that’s as close as your kitchen pantry.

According to the Rx Abuse Leadership Initiative (RALI) of New Hampshire, about 60 percent of Americans prescribed opioid painkillers reported keeping leftover medication in their home medicine cabinet long after ending use. Too often these painkillers end in the hands of family members or friends and the results can be tragic.

Just this week “Halloween” star Jamie Lee Curtis revealed that she once suffered from opioid addiction, telling People magazine she “bought drugs from a stuntman, rifled through friends’ medicine cabinets, and even stole painkillers from her sister.”

“I don’t want to sugar coat it. I think that these addictions are deadly,” Curtis said.  She’s right. In 2017 alone, 483 New Hampshire residents lost their lives to a drug-related overdose.

RALI NH was launched this summer with the support of the Pharmaceutical Research and Manufacturers of America (PhRMA) and local officials including Gov. Chris Sununu to encourage the proper disposal of prescription drugs in order to help fight the opioid battle.  “New Hampshire has been at the epicenter of the opioid epidemic and we are inspired by the commitment by the Governor and the organizations and individuals who are fighting every day to combat this crisis in the state,” PhRMA told NHJournal.com in August.  “We are proud to be a part of RALI New Hampshire’s efforts.”

These efforts are particularly important in New Hampshire, which had the third-highest per capita financial costs from the opioid crisis in America (behind West Virginia and Washington, DC), in addition to the tragic loss of life.  It’s not surprising, therefore, that New Hampshire voters continue to rate opioids and drug abuse as the single biggest challenge facing their state.

Why does New Hampshire have such a widespread opioid problem? Research suggests that opioid abuse is more common in rural areas, and New Hampshire is a largely rural state. Rural residents are more likely than their urban counterparts to rate the opioid problem as the most important issue facing their communities.

“We know there’s crimes occurring where people are breaking into homes just to steal this stuff. We know that workers are going into homes and they’re looking through medicine cabinets or worse, your own children or friends of your children. That’s the last thing any of us want,” DEA Assistant Special Agent in Charge Jon DeLena said in April after the previous Drug Take Back Day.

RALI NH is hoping that Saturday’s Prescription Drug Take Back Day will help. They are urging all New Hampshire residents to take a moment, check the prescription drugs in their medicine chests and, if they find painkillers or opioids, dispose of them properly.

RALI recommends dealing with leftover medicines in one of two ways:

RALI New Hampshire’s website, www.ralinh.org will serve as the hub of information about the organization’s efforts. “The alliance aims to bring together leaders to highlight programs that save lives, mobilize stakeholders, partner with policymakers and share ideas to effectively address the crisis,” RALI New Hampshire said in a statement.