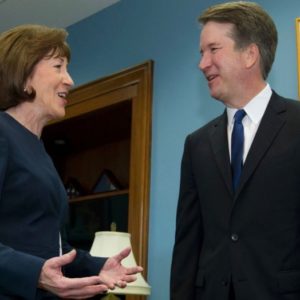 In a one-on-one interview with NHJournal Tuesday, Gov. Chris Sununu followed a simple strategy for dealing with the messy controversy surrounding Brett Kavanaugh’s nomination to the Supreme Court: Stick with Susan Collins.

Sununu told NHJournal “I absolutely agree” with Sen. Collins (R-ME) and her view that “we must hear from both sides.”

In an interview on Monday, Sen. Collins said: “In order to assess the credibility of allegations, I want both individuals to come before Senate Judiciary Committee and testify under oath. It’s important we see both individuals answer the allegations. To be fair to both, we need to know what happened.”

“I don’t know enough about Dr. [Christine Blasey] Ford and her allegations to reach that kind of judgment,” Collins added.  “Obviously if judge Kavanaugh has lied about what happened, that would be disqualifying.”

Sununu told NHJournal that he is not rescinding his endorsement of Kavanaugh, but instead–like Sen. Collins–is waiting for more information:

“The allegations are very serious, the U.S. Senate must look into it, they must take the process through, do their due diligence and get to the bottom of what really happened.  Making a judgment now based on a single allegation is inappropriate without hearing both sides.”

“And If he’s lying,” Sununu said of Kavanaugh, “that’s disqualifying–absolutely.”

Sen. Collins has since requested that the Senate Judiciary Committee allow lawyers for both Kavanaugh and Dr. Ford to question the other party during the hearing. This suggestion, and the premise that Dr. Ford should be expected to offer evidence of her accusation,  has ignited a firestorm among the anti-Kavanaugh forces. Former Clinton advisor Brian Fallon calls it “nuts.”  NARAL and the liberal activist group CREDO (among others) have released statements claiming that “The burden of proof is on Brett Kavanaugh,” and it’s his job to prove that he’s innocent, not his accuser’s job to offer any evidence or corroboration for her claims.

Rejecting the American tradition of “innocent until proven guilty” may be a winner in deep-blue corners of America where anti-Kavanaugh activists are in a frenzy.  But it’s unlikely to play well among swing voters in New Hampshire.  By rejecting the anti-Kavanaugh extremism, treating Dr. Ford’s allegation seriously (unlike some other NH Republicans), and embracing the Collins approach, Gov. Sununu has found a way navigate the current political turmoil.