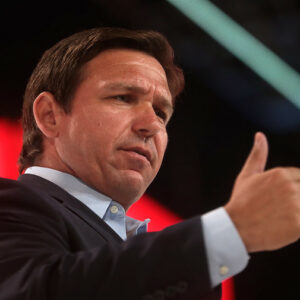 On Eve of Trump Visit to NH, Pro-DeSantis Group Picks Up Steam

Former President Donald Trump may be headed to the New Hampshire GOP committee meeting on Saturday with a lead in the national polls, but some Granite State Republicans have already moved on to another 2024 name: Ron DeSantis.

And the fact the Florida governor hasn’t announced his intention to run isn’t slowing them down.

“I worked as hard as anyone to help get President Trump elected in 2016 and 2020. He was a great President and I so wish we had him now instead of Biden,” said longtime GOP activist and state party official Kate Day of Spofford, N.H.” But if we apply President Trump’s own philosophy of hiring the best person to do the job, that means you evaluate the market, the consumer, and the performance of a potential employee or candidate.

“Republicans I talk to are grateful to President Trump but believe another strong conservative with a proven track record is the way to go. For me, that is Governor DeSantis,” Day added.

She isn’t alone. A group of Americans hoping DeSantis will carry the GOP banner in 2024 are supporting the “Ron to the Rescue” effort, a Super PAC overseen by a political consulting firm that’s already produced one campaign ad and is about to ramp up its marketing efforts.

Their motto: “DeSantis is DeFuture.”

Alex Olson, a strategist for Ron to the Rescue, says the effort began after his boss, veteran GOP consultant, and Trump supporter John Thomas, saw the results of the 2022 midterms.

“If there had been a red wave, there wouldn’t be any reason to oppose Trump as the nominee,” Olson said. “But the opposite happened. There was a ‘red trickle,’ and most of the candidates Trump endorsed in competitive races went down in flames.”

Now, Olson says, the party must make a change to avoid disaster in 2024.

“Republicans love Trump and love what he’s accomplished, but he’s not a winning variable in the equation. What I tell people is that Trump could cure cancer, solve world hunger, and end all war — and half the country would still hate him.”

“Now Republicans want to move on,” Olson said. And their destination, he believes, should be DeSantis.

“Ron DeSantis can bring together the traditional, Chamber of Commerce Republicans and the Trump supporters. We need the entire coalition to win.”

Polls, however, show Trump is still the most popular Republican in the country. An Emerson College poll released Tuesday shows Trump with a 55 to 29 percent lead over DeSantis among GOP primary voters. And a Harvard-Harris poll released a few days earlier gave Trump a 48 to 28 percent margin.

“There is an age and educational divide within the Republican primary,” said Spencer Kimball, executive director of Emerson College Polling. “Young Republican voters under 35 break for Trump over DeSantis, 73 percent to 13 percent, whereas college-educated voters break for DeSantis over Trump 40 percent to 33 percent.”

Olson says the Ron to the Rescue effort is getting a warm reception in the Granite State, and several local Republicans told NHJournal they’re ready to back the Florida governor but are waiting to go public.

“We’ve got people identified in New Hampshire to run our effort,” Olson said.

New England-based GOP strategist Pat Griffin says it’s far too early to make any predictions about 2024, but DeSantis is very well situated for the fight ahead.

“DeSantis has been the clear beneficiary of the Trump nosedive,” Griffin said. “His challenge is the old adage ‘Don’t peak too early!’ The field is nowhere near set and he’s the leader of the pack early — which is tough to sustain.”

“The cage match between Trump and DeSantis will be interesting, but it’s too early to be whistling Hail to the Chief during one’s morning shave — which I suspect DeSantis does every morning.”

Olson says the Ron to the Rescue Super PAC already has the support of major donors, and Thomas told the Washington Examiner they’re prepared to spend at least $50 million in 2023 to help DeSantis finish first in the GOP field.

Asked about Granite State favorite son Chris Sununu, who many expect to enter the presidential primary, Olson said he liked Sununu and thinks he’s a good leader. “But his problem is the same as the rest of the field. People like [Virginia Gov. Glenn] Youngkin and the other names you’re hearing, they can’t get the midwestern Trump voters that helped us break the ‘blue wall’ in Pennsylvania, Michigan and Wisconsin.

“DeSantis is the best of both worlds. He brings to the table the Chamber of Commerce Republicans, but he also has high favorability among Trump Republicans.”

But whatever the outcome, Olson said, the Ron to the Rescue team is going to back the GOP nominee.

“We’re not the Lincoln Project — I want to stress that. We’re not closet liberals trying to destroy the GOP,” Olson said. “I’m a Republican through and through, and I think what Trump did for the country was great.

“But what we saw in November was a disaster.”