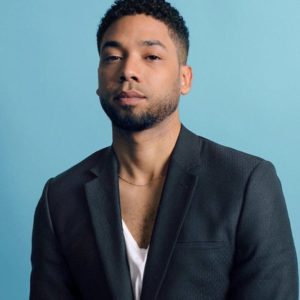 Democratic U.S. Senators—and 2020 POTUS hopefuls— Cory Booker and Kamala Harris were caught flat-footed on the campaign trail when confronted with their own tweets about the Jussie Smollett hate-crime story.  Both candidates immediately declared the alleged attack a “lynching” when the story first broke, but now they are struggling to defend their rush to judgment as the story appears to be a hoax.

Smollett, an actor on the Fox TV show Empire, told police that early on the morning of January 29, he was attacked by two men who, he claimed, wore red hats and shouted “This is MAGA country” as they threw bleach on him and choked with with a length of rope.  Smollett when on to claim that the attack was motivated by the fact that he is both African-American and gay, and inspired by his public criticism of President Trump.

“I come really, really hard against 45,” Smollett told ABC News, a reference to the fact that Trump is the 45th president.

The details of the story were always improbable— random racist attackers lingering in the streets of Chicago at 2AM on one of the coldest nights in the city’s history, who just happened to be fans of a TV show about the urban music industry and had a bottle of bleach handy.  According to one report, investigators always had doubts about Smollett’s story because “Not a single Trump supporter watches ‘Empire.'”

But that didn’t stop many in the media and politics, including Booker and Harris, from declaring it a Trump-inspired hate crime.

On the day of the alleged attack, the New Jersey senator tweeted: “The vicious attack on actor Jussie Smollett was an attempted modern-day lynching. I’m glad he’s safe. To those in Congress who don’t feel the urgency to pass our Anti-Lynching bill designating lynching as a federal hate crime– I urge you to pay attention.” 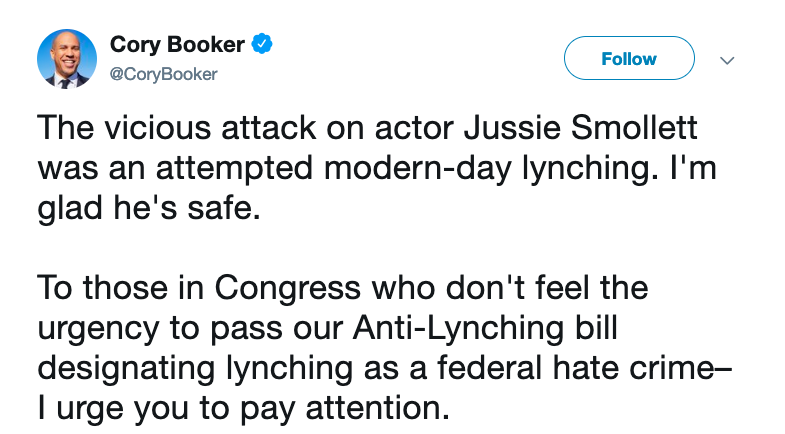 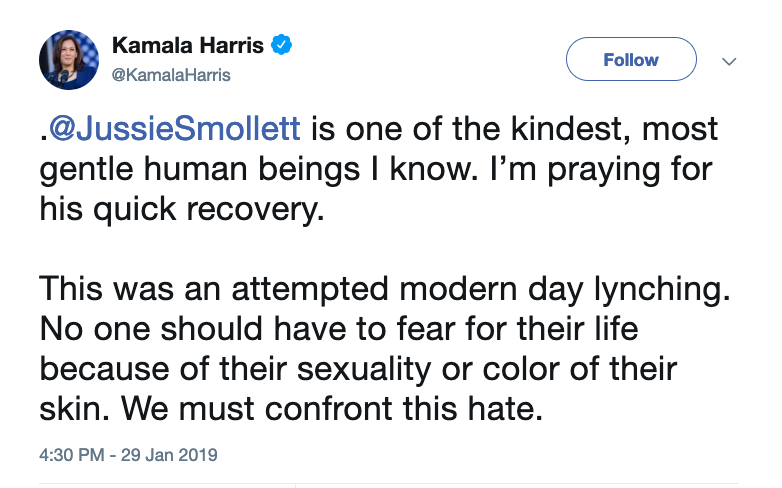 “This was an attempted modern day lynching. No one should have to fear for their life because of their sexuality or color of their skin. We must confront this hate,” Harris tweeted.

In the weeks since, police have detained–and then released–the two alleged attackers. Both are African-American and have connections to Smollett, and they now say the TV star paid them to participate in the attack. According to some published reports, they actually rehearsed the fake hate crime in advance.  Now that the original story is imploding, these Democrats must reconcile their previous statements with the facts.

On Monday, both Booker and Harris were asked about the story as they campaigned in New Hampshire.

“I’m going to withhold until all the information actually comes out from on-the-record sources,” Booker told reporters who asked about his previous declarations. “I’m following the news just like you,” Booker said.

Sen. Harris appeared to be unfamiliar with her own tweet when asked about it at an event in Portsmouth, NH.

“Which tweet? What tweet?” Harris asked when a reporter questioned her about the story. After the reported quoted her own tweet back to her, Harris paused before saying that “the facts are still unfolding” and “once the investigation has concluded then we can all comment.”

“But I’m going going to comment until I know the outcome of the investigation,” the California Senator said.

Critics say that waiting for more information, or at least being dubious about a difficult to believe story, should have been their first reaction. And, some note, it appears to reveal the lingering attitude among members of the American Left that Trump’s supporters are, as Hillary Clinton famously called them, “deplorables.”

“Many liberal pundits and thinkers simply believed Smollett because it confirmed all of their biases about the president’s supporters,” wrote Robby Soave, author of the upcoming book Panic Attack: Young Radicals in the Age of Trump. “Many on the left believe that Trump has unleashed a wave of racist, xenophobic, bigoted hatred across America, irrespective of the details of a single incident.”

Some Democrats, like Sen. Bernie Sanders, have explicitly labeled President Trump a “racist.” But it’s the attacks on Trump’s voters, more than the president himself, that could cause potential problems for Democrats like Booker and Harris who, if they win their party’s nomination, will be asking voters who backed Trump in 2016 for their support in 2020.

Many voters in swing states like New Hampshire, Iowa and Wisconsin voted for both Barack Obama and President Trump. Is calling them bigots who are likely to perpetrate hate crimes smart politics?

It’s also an open question whether calling America a nation full of racists and haters is a winning message in a general election.  In an interview on New Hampshire’s WMUR-TV, for example, Sen. Harris said that “lynching isn’t just part of our past, it’s part of our present.” She went on to note that “we’ve had people in the highest levels of government engaged in blackface.”

What she didn’t mention is that the two people she’s referencing, Gov. Ralph Northam and Attorney General Mark Herring of Virginia, are both Democrats.