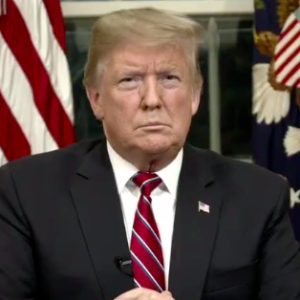 On Border “Crisis” Question, Voters Side With Trump Over Democrats

On Tuesday night, Donald Trump took his battle for border wall funding to primetime TV, but Democrats refused to even acknowledge there was a border “crisis” to battle over.  In fact, listening to the three speakers, it was hard to tell they were discussing the same topic.

President Trump addressed the issue of the ongoing government shutdown briefly, but spent most of his time talking about the surge of illegal immigrants and asylum seekers crossing the borders, as well as the negative impacts of illegal immigration.

“In the last two years, ICE officers made 266,000 arrests of aliens with criminal records including those charged or convicted of 100,000 assaults, 30,000 sex crimes, and 4,000 violent killings,” the president said. “Day after day, precious lives are cut short by those who have violated our borders.

“In California, an Air Force veteran was raped, murdered and beaten to death with a hammer by an illegal alien with a long criminal history. In Georgia, an illegal alien was recently charged with murder for killing, beheading and dismembering his neighbor. In Maryland, MS-13 gang members who arrived in the United States as unaccompanied minors were arrested and charged last year after viciously stabbing and beating a 16-year-old girl.”

Speaker Nancy Pelosi and Sen. Chuck Schumer, on the other hand, made vague references to Democrats supporting border security while opposing what Schumer called an “ineffective, unnecessary border wall” and talking mostly about government workers and their families hurt by the shutdown.

“The fact is: President Trump has chosen to hold hostage critical services for the health, safety and well-being of the American people and withhold the paychecks of 800,000 innocent workers across the nation – many of them veterans,” Speaker Pelosi said.

“There is no excuse for hurting millions of Americans over a policy difference. Federal workers are about to miss a paycheck. Some families can’t get a mortgage to buy a new home. Farmers and small businesses won’t get loans they desperately need,” added Sen. Schumer.

Liberal groups like the League of Women Voters joined in: “The real threat to the safety and security of Americans is the loss of paychecks for hundreds of thousands of hard-working public servants during the ongoing shutdown,” they said in a statement.

So who carried the day? “Judging by the comments from both sides, we’re no closer to ending this impasse,” Jessica Vaughan of the Center for Immigration Studies told InsideSources. Vaughan, who supports stricter immigration enforcement, said that Trump “did a good job promoting border security, but I wish he’d spent more time explaining why there’s a crisis.”

“As long as we have policies that allow people who make asylum claims–claims they know are almost certain to be rejected–to be released into the country if they have a child with them, we’re encouraging desperate people to risk the lives of children. That’s the ‘immoral’ part  that Speaker Pelosi won’t fix,” Vaughan said.

President Trump echoed that sentiment in what was probably the most memorable line of the evening:

“Some have suggested a barrier is immoral. Then why do wealthy politicians build walls, fences and gates around their homes? They don’t build walls because they hate the people on the outside, but because they love the people on the inside. The only thing that is immoral is for the politicians to do nothing and continue to allow more innocent people to be so horribly victimized.”

While President Trump and the Democrats mostly talked past each other, there was one clear area of disagreement. President Trump insists that there is, in fact, a “crisis” at the southern border, while both Pelosi and Schumer referred to it as Trump’s “manufactured crisis.”  Who’s right?

According to the Washington Post, “2,000 unauthorized migrants who are being taken into federal custody each day” at the Mexico border.  Another anti-Trump outlet, Vox.com says: “More families crossed the US-Mexico border without papers in November 2018 than in any month since the Department of Homeland Security started tracking family apprehensions separately.”

But the final judgment belongs to the voters, and according to a Morning Consult poll released the day of the speech, they are with President Trump on the “crisis” question.  The poll found that 42 percent describe the current situation as a “crisis” and 37 percent say it’s “not a crisis but a problem,” while just 12 percent agree with the Democrats that there’s no problem at all.

“This is why Trump may have won the night. Democrats are still denying there’s a problem. Americans can see people rushing the border and climbing the fences, they see the coverage of the overcrowded border facilities. Of course there’s a problem–a major one,” Vaughan said.