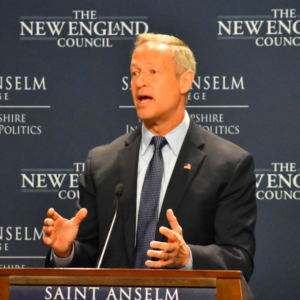 O’Malley: Gun Control Is A Winning Issue For Democrats In 2020–And Beyond.

“I bring good news,” O’Malley told the crowd at St. Anselm College. “It’s springtime. There’s goodness in this country, and it longs to be called forward.”

The “Politics and Eggs” event hosted by the New England Council and St. Anselm’s Institute of Politics is a mandatory stop on the presidential-contenders New Hampshire circuit.  O’Malley used this return visit to call upon Democrats to embrace the energy and idealism of young Americans. He specifically pointed to the leaders of the #MarchForOurLives rally for gun control, which he attended with his son.

“If you want to know where a country is headed, talk to its young people,” O’Malley said. “What I heard from that stage was the best of America.”

O’Malley made light of his previous less-than-successful bid for the White House, calling his return to the Granite State “a triumph of hope over cruel experience.”  He also took a pot shot at his previous POTUS rivals (“I was the only lifelong Democrat who ran for President in 2016”) and offered praise of a sort for the current resident of 1600 Pennsylvania Avenue:

“Donald Trump is the most effective tool for candidate recruitment we Democrats have ever had.”

On policy, O’Malley toed the progressive line on issues from gun control to immigration to social spending—even calling for an expansion of Social Security at a time when many analysts are concerned about its long-term solvency.

But the specific issue most on the mind of the crowd and the candidate was guns. “America is the only developed nation on the planet to allow people to buy combat assault weapons,” O’Malley said repeatedly throughout his remarks.  When a questioner asked what he would do about school violence “without repealing the Second Amendment,” O’Malley laid out his extensive record on gun control while governor of Maryland: Requiring fingerprints and gun training for all purchases; imposing a mandatory 7-day wait period; banning the sale of magazines that hold more than 10 rounds of ammunition; and banning the sale of what O’Malley insists on calling “combat assault weapons.”

The NRA calls these same guns “45 specific types of commonly owned semiautomatic firearms” and Maryland passed O’Malley’s gun law in 2013 over their strenuous objections.  Interestingly, the homicide rate in Maryland has actually increased since the 2013 gun ban went into effect. In fact, the city of Baltimore alone had almost as many murders in 2017 (343) as the entire state had the last year O’Malley was governor (363). Why would gun crime increase in the wake of a gun ban, and at a faster rate than the nation as a whole?

“It’s hard to measure prevention,” O’Malley said, before laying the blame for increased homicide rates at the feet of the two Baltimore mayors,  Stephanie C. Rawlings-Blake and Catherine Pugh, who were elected after he left the mayor’s office to become governor.

O’Malley claimed there’s “a strong correlation between states that make it harder for pope to buy combat assault weapons and lower rates of both homicides and suicides,” an opinion some researchers do not share.

“In Baltimore there were a number of things we did during the 10-year period [when O’Malley was mayor] we led all cities in the rate of reduction of crime, and I was not able to make many of those things permanent. Upon my leaving, my two successors starting making different policy choices.”

O’Malley paused, then added: “There really wasn’t much journalistic scrutiny about those reversals of policy and as a result a lot of people are being killed again in our poorest neighborhoods.”

So does Martin O’Malley believe that gun control is a winning issue for Democrats in 2020?