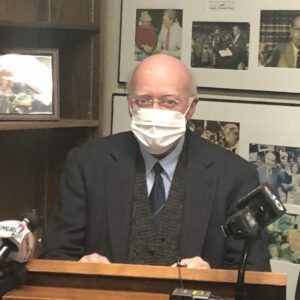 In an unusual move, the National Republican Senatorial Committee released a statement Tuesday “honoring” a Democrat for his years of public service — in this case, New Hampshire Democrat Secretary of State Bill Gardner, who announced his upcoming retirement on Monday.

“In Honor of His Retirement: Bill Gardner’s Greatest Hits,” read the headline on the NRSC press release.

“Yesterday, Democrat New Hampshire Secretary of State Bill Gardner announced that he is retiring after an impressive 45 years in office. Among his greatest accomplishments is safeguarding New Hampshire’s First In The Nation Primary, affectionally earning him the nickname ‘Gardner the Guardian,'” the release said.

The NRSC proceeded to “highlight” his opposition to the Democrats’ “Freedom to Vote” act, which would expand federal control of state elections. Sen. Chuck Schumer is calling for the 50 Democrats in the Senate to end the filibuster rule in order to pass the legislation over GOP objections. A key vote will come from Sen. Maggie Hassan, who recently reversed her position on the filibuster rule.

“Unfortunately, his near half-century of work protecting New Hampshire’s primary status is on the cusp of being undone by his own state’s – his own party’s – junior U.S. Senator Maggie Hassan,” the NRSC wrote. “She shocked those in her state, including Secretary Gardner, when she recently advocated eliminating the filibuster to pass a bill that would strip her own state of election control and likely their #FITN primary…seemingly for political reasons.”

NRSC spokesperson T.W. Arrighi also called out Hassan over the fact she has never spoken to Gardner — the longest-serving election official in the U.S. — about the potential impact of the legislation she supports.

“No one knows election law in New Hampshire better than Bill Gardner. We endorse his opinion that Maggie Hassan has made a move that will hurt voter turnout in her state and could likely cost New Hampshire their First In The Nation Primary,” Arrighi said. “Too bad she couldn’t pick up the phone to talk it over with him.”

While Republicans like Gov. Chris Sununu and state Senate President Chuck Morse have long praised Gardner, his fellow Democrats haven’t been as kind. In 2018, New Hampshire Democrats were so determined to dump Gardner and elect failed gubernatorial candidate Colin Van Ostern as secretary of state, they shoved through a last-second rule change to hold a vote in the House Democratic Caucus — the first in decades. Van Ostern received 179 votes from his fellow Democrats, while Gardner garnered just 23.

Democrats were angry over Gardner’s participation in the Presidential Advisory Committee on Election Integrity created by President Trump.

“Hundreds wrote in opposition to Gardner’s participation, yet SoS is burning taxpayer time & $ to work on Trump’s sham commission,” the state Democratic Party tweeted at the time.

The biggest divide is over the New Hampshire Democratic Party’s support for the “Freedom to Vote” act, which would override New Hampshire’s ability to decide basic rules like whether or not to count ballots that come in late, or what sort of voter ID requirements to have. And the John Lewis Voting Rights Advancement Act could put the Granite State under the same federal election oversight as states in the Jim Crow South.

All four Democrats in the New Hampshire delegation disagree with Gardner on that and support the expansion of federal power over New Hampshire’s election.

Which is interesting, given this 2017 tweet from the NHDP: “Gardner’s civic duty is not to Trump’s sham voting commission, it’s to the ppl of NH as SoS. NH already has election integrity.”

If New Hampshire already has election integrity, why does it need a new federal law? That is the question Gardner is asking, which may be why he’s more popular with Republicans.