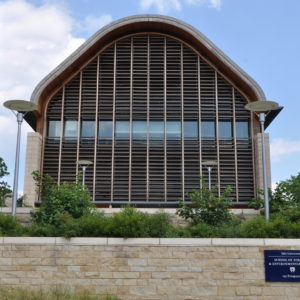 Yale School of Forestry & Environmental Studies at Yale University in New Haven, Connecticut, on July 4, 2012. The school has the oldest graduate forestry program in the U.S.
News

As the Northern Pass application makes its way through the state’s Site Evaluation Committee, students opposed to the project are sounding the alarm of their own university’s involvement in the power plan. Students from Yale University recently toured the North Country to see how the 192-mile hydroelectric transmission line from Canada to Deerfield would affect the area.

The $1.2 billion project would impact most, if not all, of the New England states by physically building the lines in states like New Hampshire or through consumption of the energy in places like Massachusetts and Connecticut after it’s connected to the rest of the New England power grid. The SEC is poised to make a final decision on the project in September.

The students visited Lancaster, one of the towns along the proposed route, and said it was an eye-opening experience.

“You can’t tell how big Northern Pass is from New Haven, and we were able to understand the impact that huge towers and a wide path through miles of forests will have on the environment and local communities,” said Mehmet Dogan, a physics graduate student at Yale. “I was very moved by the passion and commitment of the people who are opposing Northern Pass. What drives them is a sense of pride in the beauty and the authenticity of northern New Hampshire.”

She said the students visited the area after an op-ed was published in the Yale Daily News in April criticizing the university’s involvement in the project. The op-ed pointed to land Yale owns that they leased to Northern Pass to build its power lines.

“University President Peter Salovey and the Yale Corporation must acknowledge the University’s duty to block the Northern Pass,” the op-ed reads. “Refusing to act would be a moral failure.

Bayroot, LLC, an entity that is 98.8 percent owned by Yale’s endowment, has leased a land agreement with Eversource, the parent company of the Northern Pass project. The lease includes 24 miles in Coos County the company can use for the transmission lines. The lease is up for renewal this year and now, students and faculty at the university are encouraging the university to not renew it.

However, it was reported in 2012 that Yale signed the lease with Eversource. Northern Pass officials are wondering why people are upset all of a sudden about the deal, but project opponents said Yale’s ownership was not apparent to residents until recently.

In a recent letter to Ingrid Burke, dean of the Yale School of Forestry and Environmental Studies, Coos County Commissioner Rick Samson said the college should not “sit on the sidelines” on this issue.

“Unfortunately, Yale is undermining these sacrifices by leasing the only strip of land left that could still enable this transmission line’s route,” Samson wrote.

Samson said the university has one of the top forestry schools in the country and “it is Yale’s moral agent for environmental issues. The school benefits from the endowment fund, and so it should not abdicate responsibility for the environmental harm that this fund inflicts.”

Burke responded to Samson, saying, “I can imagine the environmental impact of the transmission lines, and how you and the county are feeling about that. I’m of course very interested to learn about what options are being considered by the siting authorities, and whether there are any at all that minimize impact, or whether there are alternative sources of energy.”

Yet, she went on to say that it’s not the school’s place to take a position on the Northern Pass project.

“In terms of our School supporting your group, my philosophy is that we do not generally advocate for any particular action or — we are a source of neutral information and analysis,” she wrote. “Universities need to be places that do not take stands, for many reasons, related to credibility and growing public distrust that our scholarship and our teaching are driven by a particular agenda.”

On May 10, a “teach in” was held at Yale to educate people on Northern Pass and the university’s role in the project. Lancaster-resident Liz Wyman, a 2004 graduate of the Yale School of Forestry, addressed nearly 50 attendees.

“Our message to Yale is to drop the Northern Pass lease and open up a broader conversation as well about Yale’s management issues for this property,” she said.

The Yale Student Environmental Coalition (YSEC) held an earlier event on March 31 to make students aware of the impact Northern Pass would have on Coos County. They also invited leaders of Quebec’s Pessamit Innu First Nations who say their way of life is hurting because of these large land projects in Canada.

“Yale has a decision to make, and it’s going to determine what this University stands for,” said Sophie Freeman, Yale student and YSEC member, in a statement. “Will Yale support trampling the rights of indigenous people and unsustainable environmental practices, or will Yale act on its professed values?”

Wyman said a group of undergraduate students are submitting a letter to Yale’s investments office urging them to drop the Northern Pass lease, but a spokesman for Yale said the university “does not disclose its investments.”

According to a February poll from the University of New Hampshire Survey Center, support for the project in the Granite State has declined in recent years. The latest poll found that 42 percent of respondents strongly or somewhat oppose Northern Pass, compared to 34 percent that either strongly or somewhat support it. However, 35 percent said they are not very familiar or are not at all familiar with the controversial project.