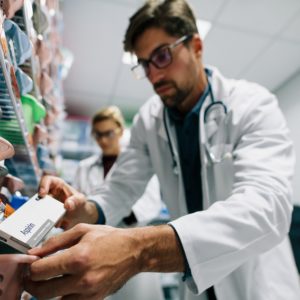 Posted to Politics May 16, 2019 by Brendan Williams

We face a critical medical and financial crisis.  Skyrocketing prescription drug prices are unaffordable for millions of Americans.  A survey found one in four Americans cannot afford the drugs they need to stay healthy.  People are making the fatal choice to ration high-priced insulin – a drug invented almost a century ago.  Older adults live on fixed incomes and often rely on several drugs per day to stay healthy, or alive.  We see it every day in the long-term care facilities we represent.

Health care concerns were a driving force in the 2018 elections.  The Trump Administration has promised to hold the pharmaceutical industry accountable for their high prices and lawmakers have held over a dozen hearings to discuss the crisis and possible solutions since then.  And while there is hope that Washington will finally hold Big Pharma accountable, we need real solutions, not phony answers.

Several proposals put forth so far are promising, but the administration’s “Rebate Rule” is the wrong prescription.  Under Medicare Part D, the federal government cannot negotiate drug prices.  Instead, pharmacy benefit managers (PBMs) use their clout to negotiate prices downward.  Now Alex Azar, the former drug company executive serving as Trump’s health secretary, wants to diminish even the ability of PBMs to lower prices.

Azar, who more than doubled the price of insulin while at Eli Lilly, would eliminate key price concessions, called rebates, from the drug supply process for Medicare Part D.  These rebates keep premiums down, and represent the only check on drug companies’ complete control over prices.

Just this month, an analysis from the nonpartisan Congressional Budget Office (CBO) of the Rebate Rule found that if “rebates were no longer paid directly to plans, Part D premiums would rise.”  According to the Trump Administration’s own analysis, Medicare Part D premiums will increase by 25 percent as a result of this rule.

But it doesn’t end with increased Medicare premiums. The CBO noted that “higher premiums would lead to larger federal subsidies, thus increasing federal spending.”  It found the rule would also increase federal spending on drugs by $177 billion over the next decade – a whopping price tag of nearly $200 billion for taxpayers.

There’s more. The CBO also predicted the Rebate Rule would fail to accomplish its intended objective of lowering prices. The nonpartisan analysts estimate drug makers will instead retain the revenues usually conceded in rebates – without lowering list prices.

If patients and taxpayers stand to lose, who wins?  Big Pharma of course!  The same Big Pharma now being sued by 44 states for allegedly conspiring to drive up the costs of even generic drugs by as much as 1,000 percent.  The same Big Pharma facing lawsuits and prosecution for creating the demand that gave us the opioid crisis ravaging our state.

Big Pharma is working hard to promote the Rebate Rule and to shift blame for rising prices onto others in the drug supply chain.  CMS estimates that Big Pharma stands to be rewarded with a more than $100 billion bailout if enacted – the last thing one of the most profitable industries on Earth needs as it continues to price gouge patients.

For older adults, especially, this is an absolutely existential crisis, coming at a time when they’re also increasingly struggling to afford long-term care.  We need Senators Hassan and Shaheen, and Representatives Kuster and Pappas, to speak out against the Rebate Rule.  Washington needs to stay focused on market-based solutions that hold Big Pharma accountable and bring real relief to Granite Staters at the pharmacy counter.