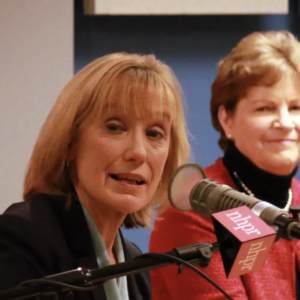 NHPR: No Comment On Our Debate Deal with Hassan

At least a week before the Republican primary to determine the GOP’s nominee, Sen. Maggie Hassan was negotiating an agreement with the left-leaning media outlets New Hampshire Public Radio and NH Bulletin to schedule a debate in the U.S. Senate general campaign. Republican critics denounced that as “arrogant” and “definitely not the norm” for the democratic process.

On Friday, Hassan made her arrangements with NHPR — along with media outlets NH Public Television and WMUR-TV — public by releasing her approved “debate schedule.” But when NHJournal asked NHPR about its deal with Hassan, it declined to discuss it.

Critics of Hassan and NHPR’s liberal politics, however, were happy to speak out. They believe the pre-primary cooperation between the two is a sign that Hassan was shopping for friendly debate forums and NHPR was happy to oblige.

On the Drew Cline radio show Monday morning, GOP U.S. Senate candidate Sen. Chuck Morse (R-Salem) was asked if he would accept Hassan’s debate schedule declaration. “Absolutely not,” Morse said. “She’s got a lot of explaining to do and she’s not going to do it just on the forums where she wants to do it.”

Radio host Jack Heath, who has traditionally hosted debates in every major election, asked Gov. Chris Sununu if he was surprised by Hassan’s edict.

“Well, it’s very inappropriate, but I’m not surprised,” Sununu said. “The fact that in a general election that’s going to be a very close race with national implications, [Hassan] is trying to dictate who and when she’s going to talk to, and about what — that’s bogus, that’s absolutely bogus. There’s too much at stake.”

Hassan’s attempts to avoid media scrutiny are well known, particularly on Capitol Hill where D.C. journalists say she is notoriously fleet of foot when the press appears. Often reporters are working on stories about the border crisis and the flood of fentanyl into the U.S., both issues handled by the Homeland Security Committee on which she serves. That has changed somewhat, D.C. journalists tell NHJournal, as her re-election campaign has stepped up.

In New Hampshire, Hassan’s office has a policy of refusing to respond to interview requests from media outlets she deems less than friendly to her politically (including NHJournal.)

But even her critics have been taken aback by what they see as a brazen attempt to avoid difficult questions in a general election debate.

“Since when can candidates pick and choose what media outlets they’ll debate on before there’s even a candidate to negotiate with?” asked NHGOP state chairman Steve Stepanek. “Hassan is running a dictatorship, not a democracy. She wants to debate on left-leaning platforms because she is afraid of any and all of our Republican candidates.”

Asked why Hassan, who participated in five debates when she was running in 2016, is suddenly trying to restrict the debate negotiation process, Sununu answered, “She’s afraid.”

“Democrats know they can spend $1oo million [on Hassan] and it’s not going to matter. People aren’t going to like Maggie Hassan any more than they do now. They’re not going to want her to be in Washington. We’re all frustrated with Washington. We all want change. Why would we send the same people back to do the same thing and expect anything different? Fire them all,” Sununu said.