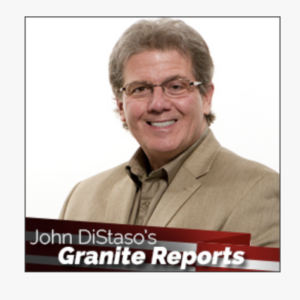 Veteran New Hampshire journalist John DiStaso has died after a long and distinguished career covering Granite State politics — in particular the First in the Nation primary and the parade of presidential candidates who came to the state.

From April 2014 until April 2015, DiStaso was News Editor of New Hampshire Journal, where he wrote his popular “Granite Reports” column.

News of his passing caused an outpouring of honors and accolades from both sides of the political aisle. Gov. Chris Sununu said DiStaso “was a force in New Hampshire politics and his loss will be felt across the country.” Sen. Maggie Hassan praised, “John’s deep commitment to sharing New Hampshire political news, day in and day out.”

DiStaso’s work at NHJournal was just a small part of his 40-year career, a stopping point between his work as a newspaper reporter with the Union Leader and a TV journalist at WMUR. As our modest contribution to remembering his career, we offer DiStaso’s Granite Reports column from March 28, 2015. It’s not a special column. It doesn’t contain any “breaking news.” But it is a classic example of the sort of smart, in-depth reporting on New Hampshire politics DiStaso was known for.

And the 2015 headline could have been ripped from a NHJournal news story today.

SATURDAY, MARCH 28. A TENT DIVIDED. Republicans may talk about the need for a “big tent.” But it’s a long way from reality if the results of this week’s poll of likely New Hampshire GOP primary voters are an indication of reality.

The headlines for the Suffolk University poll, released Thursday, focused on Jeb Bush “leading the pack” and Scott Walker being close behind. Even the Donald Trump camp put out a press release and email touting his fourth-place showing.

But the real news was the evidence of the challenge facing any GOP contender these days: Uniting the party; getting Tea Party conservatives, establishment Republican business types and social and fiscal moderates in the party on board.

First of all, there is no true frontrunner. When the 500 likely GOP primary voters (59 percent self-described Republicans and 35 percent self-described independents) were asked simply, in an open-ended way, to name their first choice for President if the Republican presidential primary were held today, 55.4 percent, or 277 of the 500 people polled, were undecided.

The 277 undecided voters were then read the names of 21 Republicans who are either announced (Ted Cruz), clearly headed toward a candidacy, such as Rand Paul and others, and people such as Mike Pence, who has made no significant move toward running and Rob Portman, who has said he’s not running.

Combining the first two rounds of answers, those decided voters and the “prompted” undecided voters, led to the result that had Bush ahead with 19 percent, Walker with 14 percent, Paul with 7 percent and Trump with 5.8 percent.

Hardly a mandate for anyone. Further proof of a wide-open battle ahead. And even with this massive, varied field, 33 percent of those polled said they were “dissatisfied” with the field, while 56 percent were pleased.

But more interesting was the evidence showing just how divided the New Hampshire “universe” of likely primary voters are, ideologically. They were asked, “Do you believe the Republican Party today is too conservative, not conservative enough or does it match your values?”

_ 32.2 percent said it was not conservative enough

_ 31.6 percent said it was too conservative, and

Asked about the influence of the Tea Party in Washington:

_ 31.6 percent said it has too much influence

_ 25.8 percent said it doesn’t have enough influence and

On abortion, the party is split, with 48.6 percent describing themselves as pro-choice and 41 percent saying they are pro-life.

On same-sex marriage, the party is split, with 43 percent in favor and 38 percent opposed.

What’s the most important issue facing the country? Twenty-nine percent said terrorism and national security, and 21 percent jobs and the economy. Illegal immigration was third at 11 percent. Split.

Can anyone unite these people? Only one man, apparently, and he was President 30 years ago.

Ronald Reagan was named by 76 percent of those polled as their “personal favorite” among the last three Republican Presidents.

And what’s their view of Mitt Romney, the last Republican to carry the banner?

Asked why they thought Romney lost in 2012, the most frequent answer, by 13 percent of those polled, was that he was “Not aggressive enough,” was a “gentleman,” or just “too nice.”

GRAHAM TO BELMONT. Belknap County Republican Committee Chair Alan Glassman tells Granite Reports that South Carolina Sen. Lindsey Graham will be the committee’s guest speaker at its next meeting, Wednesday, April 8 at 7:30 pm at the Top of the Town Restaurant in Belmont. Earlier in the evening, Graham will speak with Strafford County Republicans at Turbocam in Barrington.

It was a small, high-dollar event, with about 15 attendees, sources say.

Sources say Baker talked about issues important to the region and also voiced support for marriage equality, education reform, rail service, gas lines and business regulations, and he talked about how he won as a Republican in a “blue” state.

We understand one attendee asked Baker to run for President, but while flattered, he said he was focused on his new job in Massachusetts and had no intention of running for the White House.

_ U.S. Rep. Frank Guinta will hold his sixth and seventh town halls of the year next week – on Tuesday at the Conway Public Library at 6:30 p.m, and on Wednesday at the Campton Elementary School, also at 6:30 p.m._

_Former Maryland Gov. Martin O’Malley is scheduled to return to the state on Tuesday for a speech at the Politics and Eggs event at the New Hampshire Institute of Politics.

_ Former Texas Gov. Rick Perry will return to the state on April 16 to speak to the Granite State Chapter of the Association of the United States Army’s annual awards dinner on April 16 at 6 p.m. at the at the Crowne Plaza Hotel in Nashua.