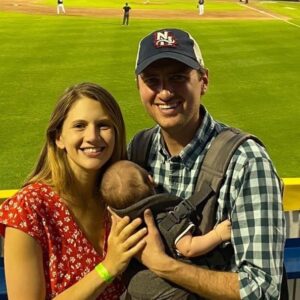 New Hampshire Journal has offered all the major candidates in the NH-01 GOP primary the opportunity to make their “Final Pitch” to Granite State voters. Please check back between now and Primary Election Day for more. Or better still, sign up for our daily newsletter so you won’t miss them!

Every morning, I wake up to the sound of my one-year-old son Jack, eager to get out of his crib. When I pick him up and look into his eyes full of wonder and joy, I can’t help but think about whether the America we know – the America we love – will be the same land of opportunity for him that it has been for me.

My Dad was a construction worker, working as a diving welder on the construction of the Seabrook Power Plant. His job is what brought us to New Hampshire when I was just two weeks old. It also had us move 13 times as a kid. Sometimes we’d just be put up in a couple of motel rooms with a conjoined door.

Jack may be our own human alarm clock – earlier than we’d like sometimes – but my dad had his own alarm, set for the dead of night, so he could make it to the job site on time. It was tough work, but he did it to achieve his own piece of the American Dream for us.

Unfortunately, that dream is slipping away for too many Americans because of Joe Biden and Chris Pappas’ ‘America Last’ agenda.

I worked with President Trump to approve the Keystone XL Pipeline that created good-paying American jobs and sent a message that America was open for business – not dependent on thugs in Iran, Russia, or Venezuela for oil. By contrast, Joe Biden and Chris Pappas are hellbent on destroying American energy independence.

Fentanyl is now the number one killer of Americans between the ages of 18-45. Over 100,000 Americans die each year from drug overdoses. These may just be numbers to Joe Biden and Chris Pappas, but for many of us, it is all too real.

My mom suffers from her own addiction challenges, and I share the pain, frustration, and concern of so many Granite Staters who just want their loved ones to become healthy again. While we must have options for those who seek recovery, we also must finally get tough on the entry point of these illicit drugs – the Southern Border.

Candidates on both sides of the aisle like to talk about “draining the swamp,” but they lack the conviction to do anything significant. I’m the only candidate who is calling for term limits and a ban on stock trading for members of Congress and their spouses. Public service is a privilege – not a right – and if you want to send the message that business-as-usual is done in Washington, you start by taking away these two perverse incentives.

Defeating Chris Pappas and Joe Biden begins on September 13th, and I’m the only tested conservative in this race with solutions to the challenges we face. I won’t let power-hungry D.C. radicals take that same dream away from my son and future generations of Americans. Most importantly, I will always put New Hampshire first and will never stop fighting for our country.

I hope to earn your support.