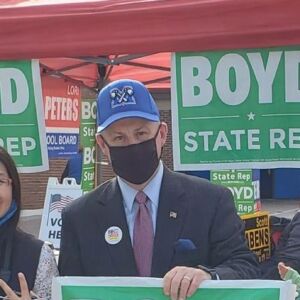 The New Hampshire GOP’s winning ways at the legislative level continued Tuesday night when Republican Bill Boyd won a blowout victory over former Rep. Wendy Thomas in the race to fill the vacancy left by the death of Speaker Dick Hinch.

“I’d like to congratulate Bill Boyd on his successful and hard-fought campaign,” GOP House Majority Leader Jason Osborne (R-Auburn) said in a statement. “Losing in Merrimack was never an option, and we had a tall order against liberal, deep-pocket, out-of-state special interests that attempted to buy the election. We set out to ensure Speaker Hinch’s seat remained in Republican hands, we remained united, and committed to our goal.”

Boyd, who has served on Merrimack Town Council for a decade, ran a locally-focused race — though he received plenty of national backing from potential 2024 POTUS contenders like Sen. Tom Cotton and former Secretary of State Mike Pompeo, who both did online events for him in recent weeks.

Thomas, on the other hand, embraced the energy of the progressive wing of her party and ran as an unapologetic member of the Left. Thomas also campaigned hard on her work dealing with the community’s PFAS problems threatening their drinking water. Outside of the district, however, she’s perhaps best known for refusing to stand for the national anthem during a House session last year.

“I am, as I have been my entire life, a fighter of what is right and good,” Thomas said Tuesday night, “Whether it is standing up for racial justice, fighting for clean water and clean air, or ensuring access to affordable health care, I am in this battle for the people of Merrimack.”

Within hours of the polls closing, Thomas was back to tweeting about alleged conspiracies surrounding the January 6 riot on Capitol Hill, a favorite topic among progressives.

The House GOP’s majority is slim, and they are likely to need all the help they can get, particularly with the possibility of a contentious budget fight looming. Boyd’s not part of the GOP’s “re-open” caucus that’s been battling Gov. Chris Sununu, and he was endorsed by the governor in Tuesday’s race.

“Congratulations to Bill Boyd on a great win! No one works harder than Bill, and he’ll fight every day for the taxpayers of Merrimack,” Sununu said.

Americans for Prosperity New Hampshire, which spent big in Sununu’s re-elect campaign, endorsed Boyd for the seat as well. “Boyd has big shoes to fill from the late Speaker, but the House could not have asked for a more principled leader to continue Speaker Hinch’s work of advancing economic opportunity for every Granite Stater,” said state director Greg Moore.

NH Democratic Party state chairman Ray Buckley reacted to the blowout defeat by dismissing the race as unwinnable from the beginning. “NH Democrats have never won a state special election held on town Election Day. Ever,” Buckley said on Twitter. “Merrimack is a Republican town. Period.”

Perhaps, but just a year ago, Democrats won a special election House race in deep-red, nearby Hooksett. And Democrats spent big on this race. While final numbers aren’t in, the disclosed spending gave Thomas a two-to-one margin over Boyd. Granite State politicos believe the total spending on Thomas could approach, if not exceed, $100,000.

Republican sources told NHJournal Monday they felt good about the race, but even optimistic Republicans were surprised by the overall turnout and Boyd’s big margin. More than 20 percent turnout exceeded the machine ballots printed for the race. Almost 900 votes were cast on non-machine ballots that had to be hand-counted.

Speaker Sherman Packard (R-Londonderry) was happy to have some good, non-controversial news.

“Congratulations to Bill Boyd on his well-earned win in today’s Special election,”  Packard said. “With his help, we will continue working hard for the People of NH, and keep our promise by lowering taxes, eliminating wasteful spending, and putting money back into the pockets of our constituents.”