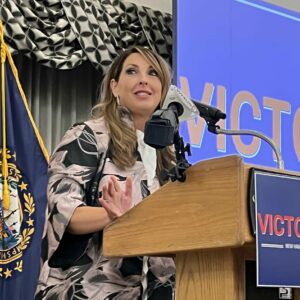 NHGOP Hugs It Out At Unity Breakfast

It may not have been entirely consensual, but Don Bolduc got his hug from Chris Sununu.

Just 24 hours after declaring victory or conceding defeat in their primary races, the GOP candidates for federal office in New Hampshire appeared determined not to let intraparty divisions doom them to defeat in November. At a crowded “Unity Breakfast” at the Grappone Center in Concord Thursday, Republicans pushed the message hard that it was time to get behind their nominees and focus their fire on the Democrats. 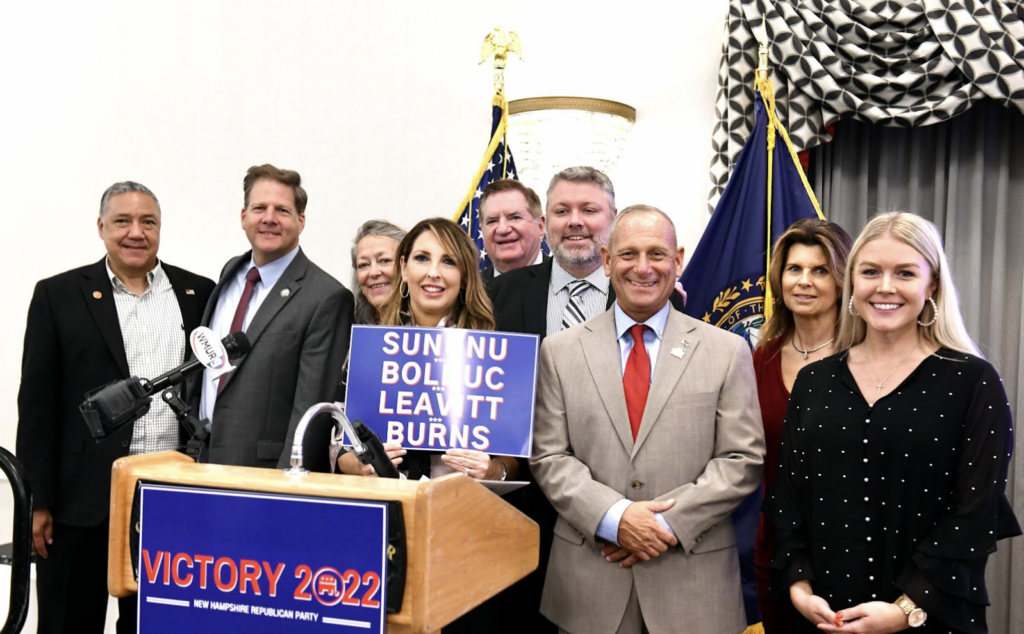 “The primary is a marathon, but now we’re in a sprint,” Bolduc said. “In a marathon, you can coast down the hills. But these next 53 days are a sprint. There’s no taking a breath. There’s no looking back. We have to come together.

“We all are fallible. We all say things in the heat of the moment that we would wish later we didn’t say. We all have to come together, and there is no better time than to do it than now.”

Then Bolduc turned his attention to Gov. Chris Sununu. The two threw down on each other hard during the primary with Bolduc calling Sununu a “Chinese Communist sympathizer” and Sununu labeling the general a “conspiracy theorist” and unserious candidate. But the Senate nominee insisted they were on the same team.

“I want to pledge to everyone here: I’ve got his back, he’s got our backs, and we’re going to win this thing!” Then Boldoc rushed off the stage to a surprised Sununu waiting to speak, threw out his arms, and wrapped him in a rib-squeaking bear hug.

“I don’t know if he meant it, but I’m sure glad he’s smart enough to do it,” one of the many GOP operatives gathered at the event said.

New Hampshire Republicans crafted the event to promote an image of unity from the start. The morning 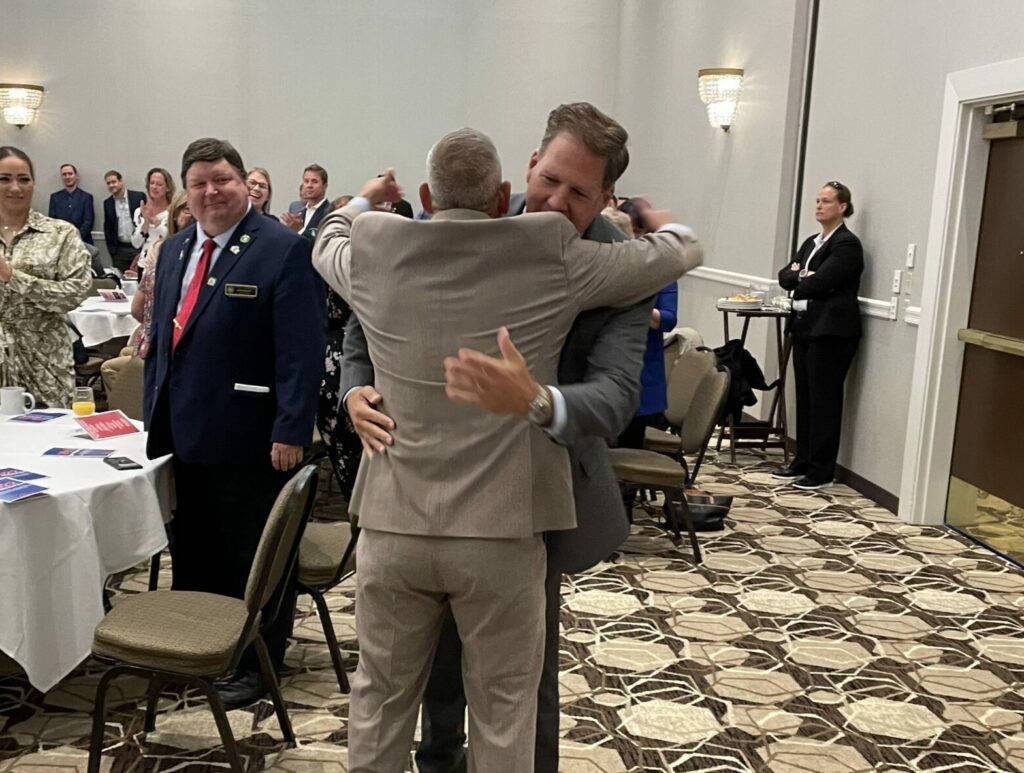 kicked off with NHGOP Chair Steve Stepanek inviting all of the candidates in the federal races who lost in the primaries to the front for a big “thank you” for participating in the democratic process. They were all in attendance, and the crowd cheered them loudly.

“I would also like to extend my gratitude to my opponents Matt, Gail, Tim, and Russell for stepping up to run as well. It was a hard-fought race, and I know it takes a lot of courage and sacrifice to run. So I thank you and I genuinely hope we can work together to achieve the goal that inspired us all to run in the first place.”

One person who’s on board is Russell Prescott, one of Leavitt’s opponents in the NH-01 primary, who announced late Thursday he’s holding a fundraiser for the GOP ticket on October 6.

Republican National Committee (RNC) chair Ronna McDaniel was the event’s headliner. She gave the audience of campaign activists the news it wanted to hear. The RNC is going to keep spending money in New Hampshire, despite reports that D.C. Republicans would abandon the Granite State if Bolduc was the nominee. While the RNC doesn’t buy TV ads, it does put boots on the ground for the campaigns. That effort will continue through November, McDaniel said.

And she also had a message for New Hampshire Democrats.

“The first thing I have to do is remind the Democrats that the Republican National Committee has already committed in our rules that New Hampshire will remain the ‘First in the Nation’ primary,” McDaniel said. “Democrats made a decision to put their [announcement] off until after the election, but Republicans are committed to New Hampshire and Democrats are walking away.” 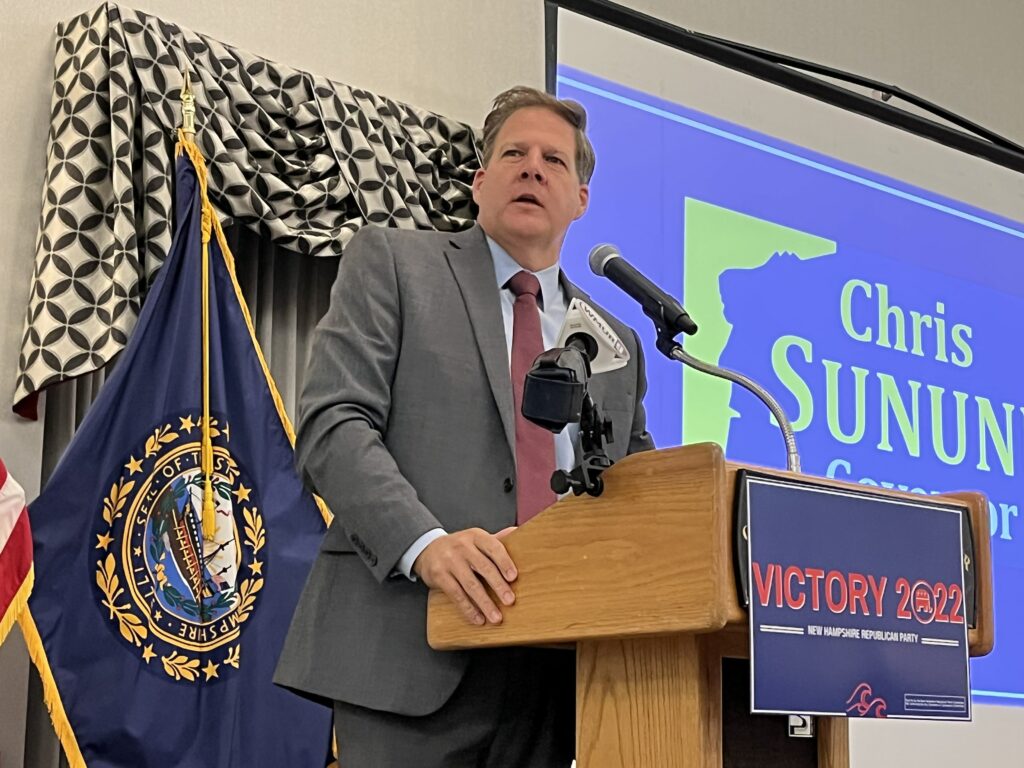 And while Bolduc may be the military veteran, it was Sununu who took on the role of general, organizing and motivating the troops. His orders: Get disciplined.

Democrats, he argued, are undisciplined and missing the mark.

“Never before has the Democrat Party been so off message, so undisciplined, so absent from what is hitting voters in their pockets today,” Sununu said. “We have an amazing opportunity…. if we stay focused and disciplined.

“The vast majority of voters in the state want change. And our message is actually quite simple: You can’t ask for change out of Washington, D.C., and keep sending the same morons back, right?”

Granite State Democrats, who held a rally of their own later that morning, made it clear they were not going to let voters forget what the newly-unified Republicans were saying about each other just days ago. Sen. Maggie Hassan has posted a digital video of the ‘greatest hits’ of Republicans like Sununu and 2020 U.S. Senate nominee Corky Messner taking shots at Bolduc.

“Republicans have spent the past two years trashing Don Bolduc as an extremist who is completely out of touch with New Hampshire. I couldn’t agree more with them — and one so-called unity breakfast can’t hide the fact that even Republicans think that Bolduc is absolutely wrong for New Hampshire,” state Democratic Party chair Ray Buckley told Fox News.

Republicans argue the most unifying force is President Joe Biden, who continues to poll more poorly in New Hampshire than nearly any other state he carried in 2020. And, they say, time will heal their rifts, while the Democrats’ problems — inflation, energy costs, the border crisis, and parents still angry about COVID policies in schools — will still linger until November.

And Republicans were greeted by reports that, for now, national Republican organizations are not pulling out the millions in ad spending they have committed to the Granite State. At least, not yet.

“I think we’ve got to do what we can,” Senate Minority Whip John Thune (R-S.D.) told Politico regarding Bolduc’s campaign. “Every one of these on the map could be the difference between the majority or not.”