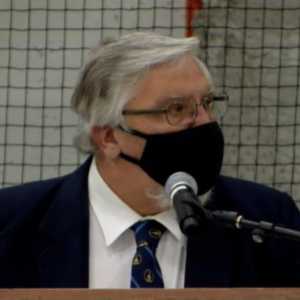 NH Speaker of the House Sherman Packard during the budget vote, April 7, 2021.
News

The GOP-controlled New Hampshire House of Representatives passed the state budget Wednesday despite sharp and continuing criticism from both House Democrats and the Republican governor. House Republicans ignored his threats and passed what they called a “treasure trove” of tax cuts, policy priorities, and state of emergency power reforms with the budget’s trailer bill, House Bill 2.

Speaker of the House Sherman Packard (R-Londonderry) told NHJournal this is a budget legislators can be proud of. “I really believe this budget will make life better for the people of New Hampshire. It reduces taxes. It provides property tax relief. When people go out to eat, they’ll pay a little less,” Packard said.

In comments to members just before the vote, Majority Leader Jason Osborne (R-Auburn) also focused on the tax issue. “This contains a tax cut for every person in New Hampshire. This is what our constituents sent us here to do.”

Notably, the House budget cuts five state taxes, including eliminating the Interest & Dividends tax over the next five years. It also reduces taxes on employers, reduces the meals and rentals tax, and reduces the state-wide property tax by $100 million.

“This budget strengthens our New Hampshire Advantage and right-sizes our state’s finances after the last budget’s spending spree,” Greg Moore, state director at fiscal-conservative Americans for Prosperity NH said in a release.

“Allowing small businesses and retirees to keep more of what they’ve earned will position our state to experience the economic boon we had between 2016 and 2019. This is an important step in the budget process, and we look forward to working with the Senate on this critical work.”

New Hampshire’s business tax rates are among the nation’s highest, a glaring exception to the Granite State’s low-tax reputation. Packard echoed the position held by Gov. Chris Sununu, that lowering those rates will raise the state’s economic fortunes.

While Sununu supports the tax policy, he told radio host Jack Heath Wednesday morning that the House version of the budget was DOA.

“The budget the House is going to pass is nothing that I would ever sign,” Sununu said. “There’s a bunch of non-germane issues, things in there taking away emergency powers and all that kind of stuff.” Sununu also claimed the House budget numbers don’t add up.

“It’s not even balanced, Jack. I mean, they didn’t even get it fiscally balanced and I’m not going to sign an unbalanced budget,” Sununu said.

Packard disagrees, saying the revenue numbers the House is using are good — and getting better. “By the time the Senate is working on this, they’ll have the April [revenue] numbers. They’re usually some of our best.”

The Democrat House minority attempted multiple amendments to the budget bill throughout the day, but all of them failed. One hotly-contested amendment was an attempt to remove House Bill 544 from the budget. Widely known as the “divisive content” bill, it prohibits government employees and contractors from espousing race-based ideology on the job. The vote to remove it failed by just seven votes, 186-193.

“House Bill 2 as amended by Republicans on the House Finance Committee and passed on the floor today fails our schools,” Representative Mary Heath (D-Manchester) said in a statement. “It underfunds state education aid for our communities and school districts by an anticipated $90 million at the worst possible time as they are struggling to recover from the pandemic.”

The bill now moves to the Senate where it’s poised to get further spending and tax cuts – including another round of employer tax relief. The upper chamber also plans on adding more policy initiatives, such as Education Freedom Accounts via Senate Bill 130.

Meanwhile, Packard said, the House has done its part by passing a bill with long-term sustainable tax relief. “This budget will be effective over time. The numbers work now, and we’re in a pandemic. Think about the revenue next year when this darn thing is over with– we should be going like gangbusters!”