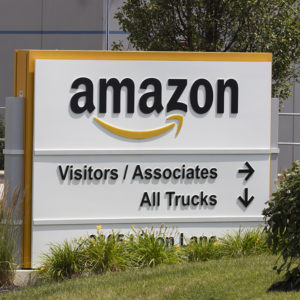 NHDOT Signs Off on Amazon Project’s Traffic Plan in Hudson

The New Hampshire Department of Transportation has given a thumb’s up to the traffic mitigation plan proposed for a potential Amazon fulfillment center in Hudson, the town’s planning board was told Wednesday night. “The Department is supportive of the proposed development and the proposed mitigation,” the NHDOT said in a statement.

Hillwood Enterprises L.P. is developing the Hudson Logistics Center at the Green Meadow Golf Club property, where two of the three buildings they hope to build will be leased to Amazon as fulfillment centers for the online retailer. The third building doesn’t yet have a tenant.

According to Hillwood, the project will generate up to $4.8 million in net tax revenue, while creating 1,400 direct jobs paying $15 to $17 an hour; it also will generate another 900 indirect jobs.

“We realize our customers include the people in the communities where we operate,” Green said.

Long time Hudson resident John O’Brien told NHJournal: “I think Hillwood has done a great job working with the state and town to address the current traffic issues in that area and I’m glad the NHDOT supports and agrees to those improvements.”

“More importantly, we learned that this will not be a ‘last mile’ facility which means there won’t be the constant flow of Amazon vans coming in and out of the facility as some people have suggested.  This fact alone should put an end to all the traffic fear mongering that’s been going on since this project was announced.”

A group of about 50 households in the immediate vicinity of the golf course have formed the activist group, Save Hudson, in hopes of killing the development. Many of these same families have been part of efforts to oppose previous development plans, sparking complaints of “NIMBY-ism.” (Not In My Back Yard.)

“I have lived in walking distance to Green Meadow for the past 36 years, Over those years I have enjoyed my peaceful neighborhood, beautiful birds, and wildlife from the preserved golf course — this Logistics Center does not belong in this rural part of town,” Gena Hunt of Hudson wrote at the Save Hudson website.

Part of the Hudson Planning Board process is the presentation of a traffic impact study (TIS) as well as plans to mitigate the impacts.

Hillwood will also pay a one-time impact fee totaling approximately $1.9 million for town improvements and, Plante said, many of the aspects of the development will improve the traffic flow around Lowell Road and the Sagamore Bridge area.

Hillwood’s plan would mitigate the current traffic problems and account for the increased truck traffic. The company will also have a video system to analyze traffic flow to find efficiencies, and Amazon scheduled truck traffic to avoid congestion.

“If something is not working, they want to fix it,” Plante said.

The NHDOT has signed off as well.

“The Department has reviewed and approved the methodology, trip generation, and traffic volumes developed in the TIS. We concur that the proposed geometric modifications and adaptive signal control proposed at the four signalized intersections will adequately mitigate the development’s traffic. Per our review of the traffic analysis in the TIS, proposed improvements will handle the existing and added traffic volumes reasonably well. Accordingly, the Department is supportive of the proposed development and the proposed mitigation.”

Save Hudson’s attorney, Amy Manzelli, responded by urging the board members to “use your local expertise that you have by virtue of living in the community, even if it’s contrary to [data] consultants have provided in their expert opinion.”

The economic impact of the project for Hudson taxpayers is significant.

The golf course property currently generates about $85,000 in annual gross property tax revenues, as opposed to the nearly $5 million in net tax revenue projected. According to Hillwood, it would also pay $81.5 million in annual wages into the New Hampshire economy.

And then there’s the COVID-19 factor.

Many New Hampshire families were worried about their children being able to find good-paying jobs even before the pandemic began. Since March, many local businesses have struggled to remain open amid lockdowns, slowdowns and mask mandates.

But Amazon has prospered. The current crisis will be over before the proposed facility opens, but it’s demonstrated that Amazon jobs are relatively recession proof.

“What’s going here is going to be a significant benefit to Hudson and the community,” Plante said.

With additional reporting by Damien Fisher.