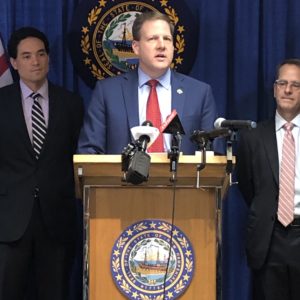 NHDems Target Sununu Over ‘Shelter In Place.’ Is That Smart Politics?

Partisan politics is rarely subtle, even in the coronavirus era.

On the same day, the Democratic mayors of New Hampshire’s two largest cities and the two Democrats running for governor all demanded that Gov. Chris Sununu issue a shelter-in-place or stay-at-home order.

“After listening to medical professionals, I am convinced the state should issue, without delay and with reasonable exceptions, a ‘Stay at Home’ directive,” Senate Majority Leader Dan Feltes posted on Facebook Monday. His opponent in the Democratic primary, Executive Councilor Andu Volinsky, released a statement saying, “I once again urge Governor Sununu to issue a shelter-in-place directive (or Stay at Home order, as some states have called such a policy).”

Thus far, Sununu has held firm. “I understand a lot of folks are asking about a ‘shelter-in-place initiative,’ and comparing New Hampshire with Massachusetts and New York — two states with high-density areas and large numbers of confirmed cases,” Sununu said at Tuesday’s coronavirus news briefing. “Please keep in mind, even in these states there are not ‘shelter-in-place’ orders. They are asking folks to stay at home,  just like we are here in New Hampshire.”

Sununu noted that mass transit is still running in New York City and Boston and that people are in fact free to move around. “What’s different in some of those states is they have implemented official orders that have mandatorily closed nonessential businesses. Here in New Hampshire, that has largely already happened on a voluntary basis.”

“I called around to a few bowling alleys and movie theaters the other night,” Sununu said, and most non-essential businesses have already closed.

“Gov. Chris Sununu must shelter in place NOW. Spoken with a significant number of hospitals, healthcare and first responder pros. This is not an alarmist statement. This is REALITY. As a result of our minimal capacity to test, we are literally flying blind.”

But do Democrats really want more businesses forced to close and more people — disproportionately, low-income workers — out of a job? According to the state’s unemployment division, 34,000 people registered for unemployment benefits last week alone. That number is going to spike even higher in the weeks to come. What would unemployment claims look like under a stay-at-home order?

Those are the policy questions. More and more it appears that, for New Hampshire Democrats, the shelter-in-place issue is a political one.

While there is no public polling on how Granite Staters feel about shelter in place orders, national polls show that Americans want a balance between security and accommodating economic concerns.

“In our last national poll, we asked about health versus income. Income won,” says Spencer Kimball, Director of Emerson College Polling. An Emerson poll last week showed that more Americans were concerned or somewhat concerned about their finances (78 percent) than about their personal health (67 percent).

However, that same poll shows voters giving governors far higher marks than the feds, with 62 percent saying their state government’s getting the response right and just 25 percent saying they haven’t gone far enough. This state and federal gap may reflect a higher level of confidence in local government, or it may just be yet another sign that anti-Trump sentiment has reached every nook and cranny of American politics, including the coronavirus response.

Either way, Sununu appears to be on solid political ground as he navigates between aggressive actions to soothe fears while avoiding drastic decisions that could set back New Hampshire’s economy even more.