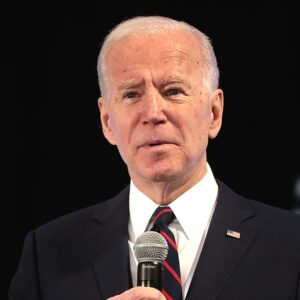 President Joe Biden may see himself as another FDR or LBJ, but progressive Democrats worry that, if he is the party’s banner carrier in 2024, their political hopes will be DOA.

The ads will air on WMUR during evening news broadcasts as well as on late night talk show Jimmy Kimmel Live, according to a statement from RootsAction. In the ad, Rep. Ellen Read (D-Newmarket) summarized the message by saying, “Our ideas are way more popular than Joe Biden is.”

Reached this week by NH Journal, Read said the ads are meant to spark a conversation among Democrats about a better way forward than the current status quo. Biden, who was first elected to the U.S. Senate the same year Richard Nixon was re-elected president, is part of what is wrong with current American politics, Read said.

“He’s part of the old guard who does the bidding of crony capitalists,” Read said. “Joe Biden represents that last 40 years of the same old, same old.”

And when Read says “old,” she means it.

“It is clear that Democrats can put forward a better candidate than Joe Biden,” Read said. “And it is clear he has some cognitive decline. He has some good days and some bad days.”

Read, a vocal supporter of Vermont Sen. Bernie Sanders during the last two presidential primaries, said the Democratic Party needs to strongly consider moving away from Biden and the way things have been done. Biden is too moderate and too old, she said.

It’s a sensitive issue for the 80-year-old Biden, according to media reports. In response to the drumbeat of coverage regarding his age and mental acuity, Politico quotes the president barking at a staffer “You think I don’t know how f—ing old I am?”

In a new poll released by Newsweek on Tuesday, nearly 60 percent of voters said Biden should not run again, and most cited his age as the reason. In June, a University of New Hampshire poll found 65 percent of Granite Staters said they did not want Biden to run in 2024. More significantly, just 54 percent of self-identified Democrats wanted Biden on the ballot, down from 74 percent a year earlier.

Another area of common interest could be Biden’s ongoing battle to strip New Hampshire Democrats of the first-in-the-nation presidential primary. When news broke about the calendar Biden pushed on the DNC, RootsAction immediately spoke up.

“Joe Biden should climb down from attempting to manipulate the Democratic primary schedule for his own narrow political purposes. As we pointed out when announcing the Don’t Run Joe campaign, ‘A president is not his party’s king, and he has no automatic right to renomination.'”

All of which means the Don’t Run Joe campaign could find fertile political ground in the Granite State. The push began just hours after last month’s midterms elections ended with text messages to local Democrats. “It’s up to NH Democrats to choose a bold leader who can defeat the fascistic Republican Party and help other Dems win,” one of text read.

RootsAction says Biden’s “moderate” policies on a host of issues like climate change, student loan debt, voting rights and healthcare have failed, and he is not likely to win in 2024.

Read has been disappointed in the anti-worker politics coming out of the Biden Administration, citing the recent railroad worker contract as an example. Biden’s team stopped rail workers’ unions from striking by forcing them to work under a contract already negotiated.

Read does not have a specific candidate in mind to replace Biden just yet. But she said with the midterms done it is time for liberals and progressives to reassess priorities. She said Biden has too often used progressive positions like student debt relief and marijuana decriminalization as campaign tools in a cyclical ploy for votes.

“We need people who will not play partisan games anymore,” she said. “Everyone is sick of the bitter divide we’re experiencing. The answer is not more (centrism,) the answer is good faith engagement.”

Mainstream New Hampshire Democrats have largely stayed out of the question about Biden’s reelection. Senator Maggie Hassan (D) for example, rarely mentioned Biden during her campaign this fall and dodged questions about his possible 2024 run. One establishment Democratic insider told NHJournal that “Biden’s victories and accomplishments” in recent weeks have made the president more popular among Democrats, and that if he runs, he’ll certainly be the nominee.

Progressives are still pushing the other way.

Former Rep. Sherry Frost, D-Dover, is an early backer of the effort to oust Biden.

“I am eager to support a candidate who understands the fatal dysfunction in our economy and is willing to hold the ultra-wealthy individuals and corporations to their obligations,” Frost said in a statement. “I am not confident that Biden is that candidate, and while I appreciate his rescuing us from another Trump term, I believe we need someone else to champion the big and systemic changes we need to continue to strive toward our more perfect union.”

Biden is expected to formally decide whether he will run again sometime around Christmas. So far, the only declared candidate in the 2024 race is former President Donald Trump.

Read is not concerned about the optics of the Don’t Run Joe campaign possibly harming Democrats. The campaign is meant to get Democrats thinking about alternatives, but it won’t interfere with Biden if he does get into the race. The Biden dissidents will stand down for the good of the party, she said.

“The Don’t Run Joe campaign ends after (he) decides whether to or not to run,” she said.