Politics ain’t beanbag, as the late Democratic Speaker of the House Tip O’Neill used to say. But the New Hampshire GOP says Democrats are taking the name-calling too far, calling Republicans the “Taliban.” And the trend is spreading across the U.S. as progressives add “Talibanism” to their anti-Republican rhetoric.

In New Hampshire, House Republicans are calling on their Democratic colleagues to condemn Rep. David Meuse (D-Portsmouth) for a tweet with the hashtag #GOPTaliban. 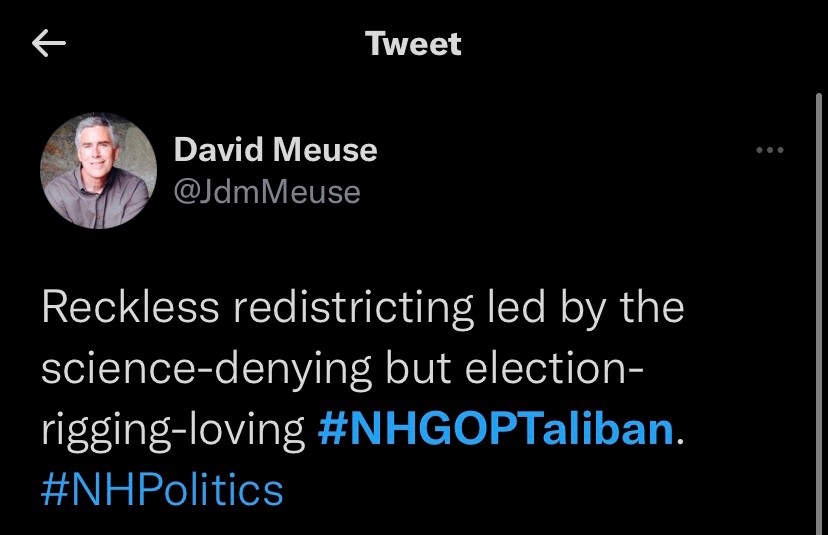 “Rep. Meuse’s attack on fellow legislators, essentially calling them Taliban, is disgraceful and dangerous. His actions have shown reckless disregard for civil discourse and show his inability to treat legislators and the public who may be Republicans in an equal and fair manner,” said House Deputy Speaker Steven Smith (R-Charlestown). He wants Democratic Leader Renny Cushing (D-Hampton) and other Graniet State Democrats to condemn Meuse’s words.

“There was a time when both major parties worked together for the good of the people of New Hampshire. Some House Democrats seem determined to destroy that forever with vicious attacks. You deserve better.”

“We would all be better off if the NHGOP got this worked up about convincing New Hampshire Republicans to get their COVID vaccination and wear a mask,” he told NHJournal.

Meuse declined to respond to requests for comment, but he has apparently made a judgment of his own. He deleted the tweet.

Interestingly, while none of his fellow Democrats have condemned his language, several have joined him.

“People who think comparing Republicans to the Taliban is too extreme need to look at the bedfellows the global conservative movement is making; there’s a straight line between the two of them. #NHGOPTaliban,” tweeted Rep. Eric Gallager (D-Concord).

And Rep. Sherry Frost (D-Dover) added: “It was noted in popular culture YEARS ago that the Tea Party turned the GOP into the #AmericanTaliban. #NHGOPTaliban.” She offered as evidence a video clip from the liberal HBO political fantasy “The Newsroom.”

Democrats are quick to note the irony of a political party that embraces Donald Trump and his long litany of offensive, incendiary speech is complaining about a harsh hashtag. “Where were these Republicans when Trump was bragging about grabbing p*ssy?” one NH Democrat activist told NHJournal.

Granite State Republicans reply that, in addition to undermining Democrats’ claims that they crave civility, their use of “Taliban” as an insult makes no sense. After all, they point out, the Biden administration has partnered with the Taliban, relying on them for security during the troubled evacuation from Afghanistan.

And on Wednesday, Biden’s chair of the Joint Chiefs of Staff acknowledged the U.S. military might coordinate with the Taliban-controlled government, which may also receive economic aid from the Biden administration, officials said.

“I encourage Democrats to continue vocalizing their deranged thoughts loud and clear for all constituents to hear,” said House Majority Leader Jason Osborne.

“If they truly believe the New Hampshire Republicans are somehow equivalent to the Taliban, I fully expect them to follow their President’s example and immediately evacuate themselves from the state,” he quipped.

Meanwhile, national Democrats and liberal media figures have also embraced the “Taliban” attack. In particular, they’re invoking it over the new Texas abortion law that restricts the procedure once the fetus has a heartbeat.

“So now Texas Republicans are putting bounties on pregnant women,” MSNBC’s Joy Reid tweeted. “I almost hate to ask what this benighted party will think of next. This is Talibanism.”

Reid’s claim about bounties on pregnant women is factually incorrect. The Texas law explicitly prohibits punishing women who receive abortions. Still,  Reid’s attack is being echoed by progressives across the country.

“Texas goes Taliban on abortion rights,” is a headline in the Arizona Republic newspaper.

Former Democratic presidential candidate Rep. Eric Swalwell (D-Calif.) tweeted, “August 31 has come and passed and what we all feared has finally happened…a tyrannical regime is using its power to control women. #TexasTaliban.”

Back in New Hampshire, there may be consequences for the House Democrats’ uncivil conduct.  “I have received several complaints related to this unfortunate incident,” Speaker Packard said in a statement. “The legislators involved will be referred to the Speaker’s Advisory Group to determine any further action.”