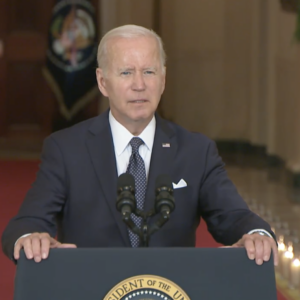 Obama economist Larry Summers says it will drive up inflation. Budget experts say it will add to the federal debt. Republicans say it’s a “terrible gamble — one for which taxpayers will end up paying the price.”

It’s President Joe Biden’s plan for college debt forgiveness and deferrals. And what do New Hampshire Democrats who may have to vote on these proposals have to say?

President Biden is expected to extend the current college debt payment holiday, which began during the COVID-19 crisis more than two years ago, by August 31. It would be the seventh time the repayment moratorium has been extended, at a cost to the taxpayers of $102 billion.

The Biden administration is also rolling out a new college debt program that would give about 7.5 million college debt borrowers who are already in default an additional year to avoid payments, in theory, to work out a repayment deal. Under the “Fresh Start” initiative, these borrowers-in-default would be allowed to borrow even more federal dollars during that year and have their credit records scrubbed.

And there are reports Biden is also considering an across-the-board college debt forgiveness program, too, with a decision expected in the next week. Biden has already proposed having taxpayers absorb $10,000 of debt per borrower, a move that would cost taxpayers $230 billion and disproportionately benefit upper-income families.

“Student loan debt relief is spending that raises demand and increases inflation,” Summers said via Twitter Monday. “It consumes resources that could be better used helping those who did not, for whatever reason, have the chance to attend college. It will also tend to be inflationary by raising tuition.

“The worst idea would be a continuation of the current moratorium that benefits among others highly paid surgeons, lawyers, and investment bankers,” Summers added.

While Biden might attempt to use his “pen and a phone” to unilaterally push the student debt tab onto the taxpayers, that move would certainly end up in court. Any major college debt deal would almost certainly have to go through Congress — in particular, the Senate Health, Education, Labor & Pensions Committee where Sen. Maggie Hassan sits.

So, what is Hassan’s position on student debt forgiveness? Does she support wiping it out entirely, or the $10,000 per borrower cancellation program Sen. Jeanne Shaheen supports?

NHJournal has asked Hassan this question for more than two years. She has declined more than a dozen requests to simply state her position. At one point, the federal employee in Hassan’s official U.S. Senate press office who took an NHJournal reporter’s call hung up on him when he asked the question.

A Google search shows while Hassan has supported some targeted student loan relief for specific groups, military service members, for example, there is no record of her taking a position on this $1.9 trillion issue.

The same is true of Reps. Annie Kuster and Chris Pappas. They, too, have declined repeated requests for comment going back months.

Why the secrecy? College debt forgiveness is a touchstone of the Democratic Party’s progressive base. On Sunday, Sen. Bernie Sanders’ 2020 presidential campaign manager and progressive leader Nina Turner tweeted: “FYI– Student debt cancelation isn’t paid for by the taxpayers, the federal government is the lender.”

This is unorthodox math, but it is popular politics among Democratic voters. A UNH Survey taken in February 2021, when Biden’s popularity was at its peak, found 82 percent of Democrats said they supported college debt forgiveness — most at the $50,000 per person level. Independents, however, were split: 46 percent supported some forgiveness, while 47 percent said borrowers should pay back what they owe. (Among Republicans, 79 percent opposed.)

Democrats like Hassan and Pappas need young voters energized and willing to turn out in November if they hope to hold on to their seats. Opposing a college-debt giveaway is unlikely to help.

At the same time, Summers’ specter of inflation is also impacting how Americans view this multi-billion-dollar proposal. In a CNBC poll released Monday, 59 percent of Americans worry college loan forgiveness would make inflation worse. On the overall issue, only one-third of respondents supported across-the-board debt cancellation, while one-third opposed any debt forgiveness. The remaining third of respondents only supported forgiveness for borrowers in need.

“It makes no sense for the Biden administration to cancel nearly $2 trillion in student loan debt. This decision would not only be unfair to those who already repaid their loans or decided to pursue alternative education paths, but it would be wildly inflationary at a time of already historic inflation,” Romney said. “Democrats and Republicans alike have called on the President to not take this unwise step and pile more onto our $30 trillion national debt.”

And, critics note, that spending would disproportionately benefit the affluent. According to a Brookings Institution study, nearly one-third of all student debt is owed by the wealthiest 20 percent of Americans while just 8 percent is owed by the bottom 20 percent.

Though Hassan has declined to lay out her position, her would-be opponents in the GOP U.S. Senate primary have been very clear.

“Gen. Bolduc doesn’t support the student loan bailout that liberals Joe Biden and Maggie Hassan continue to push,” said campaign spokesperson Jimmy Thompson. “Around 38 percent of Granite Staters have college degrees. Having 62 percent of the state footing the bill for the others is wrong and represents a regressive transfer of wealth.

“Don Bolduc is now and will always be a ‘hell, no!’ on new spending, while Sen. Hassan votes 100 percent of the time with Joe Biden and the radical left.”

Kevin Smith called out Hassan for her silence.

“Hassan refuses to stand up to Biden and her far-left party bosses, remaining deafeningly silent. I’ll state clearly where I stand: I am vehemently against this scam on all Americans, and as someone who proudly just made their final student loan payment after 20+ years, people should pay off their own debt they willingly took on.”

Vikram Mansharamani, a former Harvard instructor said, “I absolutely do not believe we should forgive student debt. We need to restore individual responsibility. Student loan forgiveness is effectively a tax-and-spend program under a different label. As such, it will be inflationary.”

Not surprisingly, libertarian Republican Bruce Fenton gave the proposal a thumbs down.

“It’s time students held academia accountable for expensive degrees and debt. High tuition should not be the burden of the taxpayers,” Fenton said. “Student loan forgiveness is just another bad idea wrapped in good marketing.”