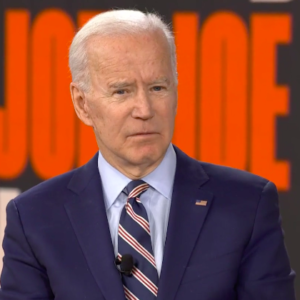 Former President Donald Trump has never been particularly popular in New Hampshire, losing the state twice to Democrats. So his dismal 34 percent approval rating in the latest UNH Survey isn’t a surprise.

But the fact that he’s tied with President Joe Biden — that is news.

The numbers are in the latest Granite State Poll, conducted by the UNH Survey Center and released Wednesday.

In July, nearly half (49 percent) of Granite State Democrats said they would vote for Biden in the 2024 Democratic primary. Today, that number is down to 37 percent. Once again — that is among Democratic primary voters.

In July, just 29 percent of Democrats wanted Biden to face a primary opponent in 2o24. Today that number has jumped to 45 percent.

Part of this is driven by partisanship, of course. But Biden’s problem isn’t Republicans. It’s the fact that 70 percent of independents disapprove of the job he’s doing, while just 70 percent of Democrats approve. (For Trump, that number among Republicans regularly hovered near 90 percent.)

Meanwhile, Harris can only get 50 percent of her own party to give her a thumbs up. Among Republicans, the veep’s approval is just one percent. One.

Nationally,  the news isn’t any better. On Wednesday, Biden’s approval hit another all-time low of 42 percent in the Real Clear Politics average of polls. Then again, with 62 percent of Americans telling Morning Consult the country is on the wrong track — and the same number blaming the Biden administration for increasing inflation — a record low may be in order.

The debate now is what will these numbers look like in next year’s midterms, and what can Joe Biden do to turn them around.

“Nothing,” says Republican strategist Patrick Hynes. “These numbers are starting to bake and Democrats know it. There’s a reason [Rep. Chris] Pappas is suddenly attacking AOC and The Squad for holding up the bipartisan infrastructure bill. He knows he has to run for ‘Mr. 34 Percent’ on the ticket.”

“After 10 months it’s official, Building Back Better is a BUST! Biden promised to bring people together but, instead, he is leading the most elitist presidency in history,” Dennehy says. “When only 70 percent of your own party approves of your job as president, it is a disaster for Democrats.

“They are staring down the barrel of a landslide defeat in 2022.”

“We are a very long way from 2024,” New Hampshire Democratic Party Chairman Ray Buckley said of the new poll numbers.

All the Granite State Democrats NHJournal spoke to — off the record — admitted the polls are a problem. But they all see the same solution: Lots of government spending.

“I think the polling numbers reflect that people are frustrated that Washington hasn’t passed the infrastructure bill, I know I am,” one senior Democratic strategist said. “It’s time for progressives and moderates to compromise and get it done. Once  some tangible action occurs, we’ll see these numbers improve.”

A Democratic grassroots organizer says Biden still has time, but he needs the checks to start hitting people’s mailboxes to turn things around.

“It hurts me to say this, but I’ve fallen into the Bernie and AOC camp on this – we need to give people direct stuff and fast,” the NH Dem said. “You’ve got to target the individual pieces — not the big bill. You’d think we would have learned the lesson from Obamacare.”

“Americans love new roads, higher employment, health care enhancements, etc. “If the Democrats get their act together and use their slim majority to actually pass something that the public feels is positive, that would break through the stalemate. But you cannot get there until you achieve legislatively.

Republicans aren’t worried about the “Biden buys our love” strategy, noting Americans with children are already getting generous monthly checks through the Child Tax Credit and Biden’s numbers on the economy are still in the tank.

“Biden promised two things: ‘I’m competent, and I’m not extreme.’ And he’s broken both of those promises,” one Concord lobbyist who works both sides of the aisle said. “Afghanistan killed the first one, and his decision to keep pushing that ‘extreme’ trillion-dollar spending is killing the other.”

Another reason for Democrats to worry is basic biology. Biden, who turns 79 in a month, is already dodging press questions and turning his back on reporters after press statements. Writers in The New York Times and The Washington Post have openly speculated about Biden’s declining mental acuity.

And then there’s his erratic decision making, overriding his own military advisors on his disastrous Afghanistan withdrawal, and flubbing the COVID messaging. Do Democrats seriously expect Biden to get better with age?

In October 2017, President Trump’s approval was about 5 points below where Biden’s is today, His party lost control of both the House and the Senate in 2018 (and flipped the New Hampshire legislature, too).

In 2009, President Barack Obama’s approval was 53 percent — 20 points higher than Biden’s today– and Democrats lost 63 seats in 2o1o in what Obama called a “shellacking.”

“Biden’s numbers look bad,” conceded State Sen. Lou D’Allesandro (D-Manchester), a longtime Biden backer. “People want things to get done, and it should be clear to the voter as to what they will be receiving.  His approval rating has dropped because it appears that nothing is happening.”

Asked what NHJournal readers should understand about Biden’s current problems, D’Allesandro said, “It is a rocky road filled with malcontents.  Nothing is ever easy.”