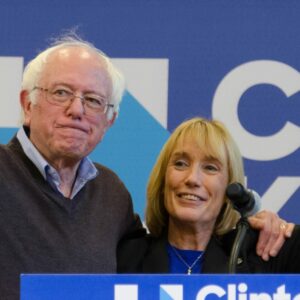 Sen. Maggie Hassan has made fighting the flow of counterfeit pharmaceuticals into the U.S. a priority. “In my state and all across the country, we are seeing a rise in counterfeit pills that are laced with illicit drugs, and they are almost indistinguishable from legitimate medication,” Hassan said during a Senate hearing earlier this year.

But public health advocates and polls show her stance on borders and drug importation may be undermining her efforts.

Hassan and fellow Granite State Democrat Sen. Jeanne Shaheen have been pushing a Sen. Bernie Sanders plan to import drugs from Canada, outside the reach of U.S. inspections. Sanders calls it the “Affordable and Safe Prescription Drug Importation Act.” Still, critics say loosening the rules on drugs from outside America’s borders is a mistake at a time when fake drugs, often made in China, are already pouring into the country.

According to media reports, counterfeit drugs pressed into forms to look like Xanax and Adderall are circulating in New Hampshire.

“They were being distributed out of Massachusetts, but they’d made their way here,” Reno told Seacoastonline.com. “It was a sizable seizure and we caution our citizens that they’re here and not safe.”

And during a recent roundtable in New Hampshire, Biden drug czar Rahul Gupta confessed that, as a physician, he can’t always tell the difference between real and fake Xanax and Oxycontin pills.

“It’s not safe any longer to even try to consume any pills that you find on the street, online or other ways, because you’re basically playing Russian roulette with your life when you’re taking those counterfeit pills,” Gupta said.

So why, critics ask, would senators like Hassan and Shaheen want to play “Russian roulette” with imported drugs?

A new poll finds Granite Staters are certainly dubious about the policy.

Asked if the New Hampshire congressional delegation should support federal legislation allowing drug importation from nations that don’t have the same public health oversight and inspections for illegal and counterfeit drugs as the United States, 68 percent of respondents said no, while 32 percent said yes.

Another poll question asked if Granite Staters were concerned that legalizing drug importation would worsen the growing problem of counterfeit drugs, 78 percent said they were very or somewhat concerned.

And asked, “If you knew that Canada inspects very few drug manufacturing facilities (unlike the United States), how concerned would you be about the safety of drugs manufactured in Canada?” the response was 73 percent very or somewhat concerned and just 24 percent not concerned.

One lesson many Americans have taken away from the COVID-19 crisis is the need to bring the manufacturing of vital products — microchips, military tech, and pharmaceuticals among them — back to the United States.

“Countless American patients have learned the hard way that ‘Canadian’ online pharmacies are often not Canadian,” reports Terry Wilcox of the patient advocacy group Patients Rising. “In recent years, thousands of patients across the country have been exposed to counterfeit drugs. Some have suffered serious injury and some have died as a result.”

The message may be getting through. In the session of Congress that ended in 2020, Sanders’ legislation had 24 co-sponsors, including Hassan and Shaheen. The current version in the Senate has just 21. Who is missing?