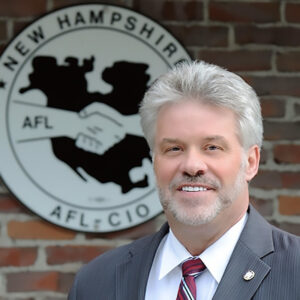 As President Joe Biden threatens millions of federal workers and contractors with firing if they refuse the COVID-19 vaccine, New Hampshire’s leading labor union is silent.

On Thursday night, Biden ordered sweeping new federal vaccine requirements that would cover federal government workers, private-sector employees in businesses with 100 or more workers, along with health care workers and federal contractors. It’s estimated to cover as many as 100 million Americans.

“We’re going to protect vaccinated workers from unvaccinated coworkers,” Biden said, despite data showing vaccines are actually extremely effective at protecting the vaccinated from those who are not.

The prospect of unionized workers being fired in response to an arbitrary order issued by an employer is what unions were created to prevent. And yet the New Hampshire AFL-CIO declined to respond to repeated requests for comment, both before and after Biden’s speech. They haven’t posted a comment on their social media accounts, either.

The American Federation of Government Employees (AFGE) has been nationally affiliated with the AFL-CIO since it was founded in 1932, according to their website. They have raised objections to Biden’s orders.

“AFGE has been clear and released a statement today that we believe everyone should get vaccinated that can be,” AFGE national vice president Phil Glover told InsideSources. “We also have told the administration that we expect bargaining to occur at the level of recognition on how vaccinations are done, who and how exceptions are handled and any other procedures and appropriate arrangements of bargaining.”

Indeed, the union bargaining appears to have already begun. Late Thursday night, the Washington Post reported that members of the Postal Workers union are getting an exemption from Biden’s mandate.

“U.S. Postal Service workers were not included in Biden’s executive order requiring all federal employees to get vaccinated against the coronavirus, according to a White House official speaking on the condition of anonymity to discuss not-yet-public portions of the president’s plan,” the Post reported. The move exempts some 644,000 employees, workers who literally go door-to-door and interact with the public on a daily basis.

However, the Post later updated its reporting to say the mandate would cover postal workers, though this has not been publicly confirmed by the White House. “JUST IN: White House official now says USPS workers ARE part of the federal vaccine mandate order under OSHA jurisdiction, though technically not under the executive order,” Post reporter Jacob Bogage wrote on Twitter.

The American Postal Workers Union has yet to make a public statement on the matter, either.

To critics, this political gamesmanship is yet another sign Biden’s proposal isn’t serious.

“President Biden is so desperate to distract from his shameful, incompetent Afghanistan exit that he is saying crazy things and pushing constitutionally flawed executive orders. This is a cynical attempt to pick a fight and distract from the President’s morally disgraceful decision to leave Americans behind Taliban lines on the 20th anniversary of 9/11,” Nebraska Sen. Ben Sasse (R) said in a statement. “This isn’t how you beat COVID, but it is how you run a distraction campaign — it’s gross and the American people shouldn’t fall for it.”

“While President Biden’s new plan to reduce the federal payroll and mitigate the private sector labor shortage is certainly creative, it is not the one I would have chosen,” he told NHJournal.

Legal scholars immediately declared many of the president’s orders unconstitutional. Most political observers expect them to wind up in court — like Biden’s eviction moratorium and his attempts to hand out some COVID-19 relief money based on race. (Biden lost all those cases.)

The Republican National Committee is already promising to sue.

“Joe Biden told Americans when he was elected that he would not impose vaccine mandates. He lied,” RNC Chair Ronna McDaniel said in a statement. “Now small businesses, workers, and families across the country will pay the price.”

“Like many Americans, I am pro-vaccine and anti-mandate,” she added. “Many small businesses and workers do not have the money or legal resources to fight Biden’s unconstitutional actions and authoritarian decrees, but when his decree goes into effect, the RNC will sue the administration to protect Americans and their liberties.”

The question remains: When a union member faces firing over his or her vaccination status, will the NH AFL-CIO defend them and try to keep them on the job?

As of late Thursday, the answer was: No comment.