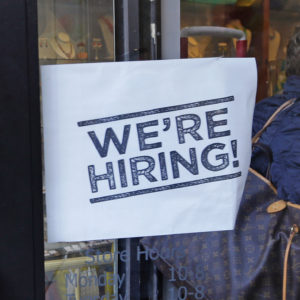 NH Unemployment Rate Lowest in Recorded History. Is That the Bad News?

New Hampshire’s unemployment rate in June was just 2.0 percent, the lowest ever recorded in the Granite State. Gov. Chris Sununu celebrated the news, but some in the business community see a double-edged sword: Low unemployment means more businesses struggling to fill jobs amid a labor shortage.

According to New Hampshire Employment Security, the number of employed residents in June was 749,080, “an increase of 2,990 from the previous month and an increase of 19,830 from June 2021.”

Sununu released a statement celebrating “a record in the 603.”

“New Hampshire had the fastest growing economy in the nation last quarter, and now, for the first time ever, we have an unemployment rate of 2 percent,” Sununu said. “None of this would be possible without the countless employees across the state who make New Hampshire the best state to live, work, and raise a family. We cannot thank you enough!”

While Sununu’s challenger in his re-election bid, state Sen. Tom Sherman (D-Rye) acknowledged the impressive numbers, he gave the credit to the Biden administration, not the New Hampshire governor.

“New Hampshire’s positive GDP growth last quarter was largely credited to government spending,” said Sherman campaign spokesperson Kelly Roberts. “New Hampshire has plummeted in the rankings of best states to do business over the past two years under Governor Sununu, and businesses throughout New Hampshire say they’re unable to fill jobs because of the high cost of housing. If we expanded access to affordable housing and childcare so that people could afford to work here and fill those jobs, then our economy could really soar.”

The inability of businesses to fill jobs is not just partisan rhetoric, and the evidence is starting to appear in the numbers as well.

At the national level, the federal Department of Labor Statistics reported a 3.6 percent unemployment rate in June. But perhaps more importantly, the labor force participation rate was 62.2 percent, below the pre-COVID rate of  63.4 percent. These are signs workers are still finding ways to remain out of the labor pool and pay their bills, adding to the ongoing worker shortage. There are currently more than 11 million job openings in the U.S., but only about 6 million unemployed workers.

Bruce Berke with the National Federation of Independent Businesses in New Hampshire says his members are struggling to fill jobs.

“It’s not great for anyone, but the year-round businesses seem to have found a way to get by. It’s the tourism-related folks who are having the most difficult time. Customers are discovering some of these businesses are open just four or five days a week. That’s due to the labor shortage and nothing else.”

Drew Cline, president of the free market Josiah Bartlett Center for Public Policy put it succinctly. “In New Hampshire’s booming economy, employers have hired just about everyone there is to hire. What we need now are more employees, and to get them, we need to build a lot more housing.”

And what does this labor shortage mean for future growth? How do organizations like Burke’s lure new businesses to a state where the labor market is already tapped? The good — or bad — news is other states are facing labor shortages, too.

“As businesses tighten their belts in the coming weeks and months due to the looming economic slow-down, those small business owners will have hiring challenges in most states,” Berke said.  “So they will continue to strongly consider New Hampshire because of our business-friendly positions on taxes, limited regulations, and fewer state mandates.”