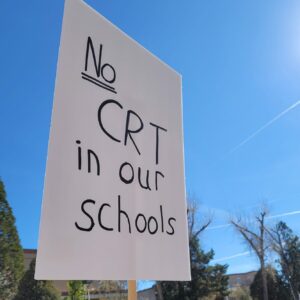 When the New Hampshire Department of Education (NHDOE) set up a website to help parents raise questions about problematic content in their children’s classrooms the state’s teachers unions responded, not with encouragement, but outrage. Describing parents’ complaints as a form of “vigilantism,” one union head is calling for the education commissioner to be fired over the webpage.

Education Commissioner Frank Edelblut last week announced the launch of a webpage “in support of the New Hampshire Commission on Human Rights (NHCHR) aimed to ensure that students and educators are free from discrimination.”

The “discrimination” in question is content often associated with Critical Race Theory and used by several school systems in New Hampshire in the past. Schools have been using content that teaches White children are inherently racist or privileged and that all White people are engaged — knowingly or otherwise — in advancing white supremacy. Government employees in New Hampshire, including public school teachers, have been banned from using this content by state law.

The new website is part of enforcing that law, House Bill 2, the Right to Freedom from Discrimination in Public Workplaces and Education, according to the NHDOE and the NHCHR.

“We know that here in New Hampshire, teachers do their best to treat everyone equally, and genuinely strive to communicate with both dignity and respect,” Edelblut said. “This webpage is now available to the public so, in the rare instance that something might appear to be adverse treatment, individuals have a place to go where they can voice their concerns and receive assistance – whether that be parents or teachers.”

This effort by the Commission for Human Rights and the Education Department comes amid a national debate over how much CRT-inspired content has made its way into classrooms. It’s an issue widely believed to have cost Democrat Terry McAuliffe — a close ally of the teachers unions — his bid for governor in the heavily-Democratic state of Virginia.

Despite overwhelming proof of race-based classroom instruction, including teachers assigning the works of CRT-advocates Ibram X. Kendi and Robin DiAngelo, the unions continue to falsely claim it’s not happening.

“It was bad enough that the law tried to find a problem that doesn’t exist—no teacher in New Hampshire teaches that any group is inherently superior or inferior to another,” AFT-New Hampshire President Deb Howes said in a statement. “That false flag has now been made worse with Education Commissioner Frank Edelblut launching a webpage to encourage parents to file complaints against teachers who allegedly teach so-called divisive concepts.”

“Almost every profession has a way for customers and the general public to raise concerns about how licensed professionals do their jobs. Websites like this exist for doctors, for hairdressers. There’s even a way to go online to the FCC [Federal Communications Commission] to question media outlets,” Edelblut told NHJournal. “Why should members of teachers unions be different? The unions’ reaction raises the question: Is there something happening in the classroom that some teachers want to hide?”

Edelblut says he rejects the view of some politicians and education bureaucrats that parental involvement and oversight is a problem or, as the National School Board Association recently claimed, dangerous. (The NSBA later retracted its statement.)

“Parents have the primary responsibility for their children’s educations. At the commission, we support transparency so everyone knows what teachers are teaching and what their children are learning,” Edelblut said.

Howes complains “innocent teachers could lose their teaching license over claims that are not backed up by any evidence.”

But in a statement, Ahni Malachi, executive director at NHCHR, notes the process is actually designed to protect teachers from unfounded complaints.

“This update to the law provides a mechanism for individuals who believe they are being discriminated against or aggrieved to have a neutral, third-party review and weigh the information. This also creates a unique opportunity for NHDOE and New Hampshire school districts to have more robust conversations about discrimination, educational efforts on the topic, and a better understanding of how to differentiate between discrimination and nondiscrimination.”

“This website is to protect a teacher’s Fifth Amendments rights. It’s more than a forum, it’s an adjudicative process that allows a complaint to be filed and reviewed, rather than simply thrown out for public scrutiny.

“Without this, disputes might end up in the hands of the social media mob. We don’t want that,” Edelblut said.

That hasn’t stopped teachers unions and their allies from opposing expanded parental oversight. In particular, they’re angry over a tweet from the parents’ organization “Moms for Liberty New Hampshire” offering “$500 for the person that first successfully catches a public school teacher breaking this law.”

“Playing politics with our children’s future has now spiraled out of control in New Hampshire with these types of vigilante tactics and we’re calling on the governor to immediately denounce putting a bounty on our dedicated educators,” said Tuttle.

She also has a Twitter ad posted asking the question, “Are You Going to Allow Bounties on Teachers, Gov. Sununu?”

Moms for Liberty is a national grassroots organization, is not connected to any state government, and their effort doesn’t require a DOE website. Asked how a governor could stop private citizens from giving their own money to other private citizens over complaints about teacher behavior, Tuttle declined to respond.