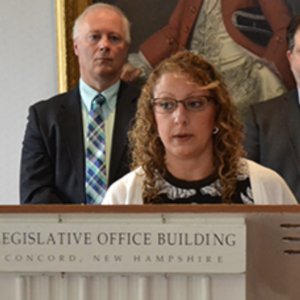 Posted to Education May 11, 2021 by Michael Graham

Documents obtained by NHJournal reveal nearly 75 percent of dues collected by the New Hampshire chapter of the National Education Association — the state’s largest teachers union –go to salaries of top staff, not to programs to benefit teachers.

According to federal tax documents from 2018, Granite State educators had nearly $7 million taken from their paychecks and given to the union, headed by controversial president Megan Tuttle. About $5.2 million of those funds went to salaries and benefits. Less than $88,000 was identified by the NEA-NH as going to “training.”

The average New Hampshire teacher salary is a little more than $61,709, about a quarter of Tuttle’s take-home pay.

It’s also significantly higher than many of her non-profit counterparts in New Hampshire.

For example, Devon Chaffee, executive director of the New Hampshire ACLU, earns about $96,000, plus another $8,500 in “additional compensation” — less than half of Tuttle’s salary.

Jack Savage, who runs the Society for the Protection of New Hampshire Forests, an environmental activist group, has a salary of $100,366. Additional compensation takes that to just under $130,000, well below Tuttle.

And across the table from Tuttle at the N.H. School Boards Association, Barrett Christina earns $138,745 in the most recent disclosures.

All of these top nonprofit officers would be among the lowest-paid executive staff of the New Hampshire NEA.

Tuttle declined to respond to repeated requests for comment. However, others involved in New Hampshire’s education system told NHJournal they found the numbers shocking.

“Over the past year, we’ve spent hundreds of hours debating how best we can balance keeping property taxes down while providing a quality education for our children. The NEA has been a constant opponent to much-needed reforms such as Education Freedom Accounts. They did everything in their power to prevent the return to in-person schooling. Education should always be about putting the students first and not about personal gain.”

While the union’s 2020 disclosures aren’t available, the numbers are likely to be similar. Did teachers get value out of the $7 million in dues they sent to Tuttle and the union during the COVID-19 crisis?

“It’s not clear that the union served the best interest of teachers during the pandemic,” said New Hampshire Commissioner of Education Frank Edelblut. “I’d ask the teachers, who’ve struggled through this last, difficult year, what they got in return for their millions in dues. What has the union accomplished, other than to undermine the trust parents have in their children’s educators?”

And a public school teacher in Londonderry who asked not to be quoted by name summed up her feelings in one word: “Disgusting.”

Democratic legislators contacted by NHJournal were unwilling to speak on the record about the salaries or the performance of the union leadership. Parents, however, haven’t been shy about showing their displeasure, organizing protests against union-backed classroom lockdowns that lasted long after the science showed it was safe for students to return to school.

A poll taken amid the COVID lockdown found just 39 percent of Americans said teachers unions are “a good thing,” down from 45 percent in the same poll from 2019.

And New Hampshire has seen one of the largest declines in school attendance in the nation as a disproportionate number of parents have chosen options outside the public school system as compared to other states.

Tuttle has been embroiled in multiple controversies since the pandemic began. She was widely criticized for calling classroom teachers “first responders” and insisting young, healthy union members get access to the limited vaccine supply ahead of more vulnerable elderly Granite Staters. And after repeatedly insisting classrooms remain closed until all teachers had been vaccinated, Tuttle reversed course and claimed she had never made such a demand.

An audio recording of an interview on NHPR proved otherwise.

“I am very surprised at the NEA salary and benefit information,” said state Rep. Glenn Cordelli (R-Tuftonboro) vice chairman of the House Education Committee. “Their mission supposedly includes advocating for New Hampshire children, but I haven’t seen that. Instead, I’ve seen them defending the current system.

“Now I have a better understanding of why.”