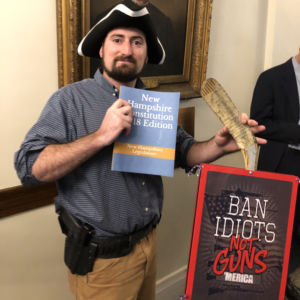 The Gunfight at the Concord Corral is back on.

Over the past two decades, New Hampshire Democrats and Republicans have fought over allowing members to carry firearms inside the state capitol. In 2013, a newly-elected Democratic majority ended the practice. in 2015, the Republicans brought it back.

And shortly after Democrats took control of the New Hampshire House last year, they amended Rule 63, which once again bans Representatives and the public from carrying “deadly weapons,” including firearms, inside House Chambers, the ante-room, and the Gallery.

Representative John Burt (R-Goffstown,) aided by former Rep. Dan Hynes, decided to sue Democratic Speaker Steve Shurtleff in his official capacity to overturn the rule.  The Constitution, Burt argued, prevents the House from infringing on his right to carry firearms in defense of himself, his property, and the State of New Hampshire.

In a small but meaningful victory, the New Hampshire Supreme Court reversed a Superior Court decision to dismiss the case and remanded it back to the lower Court for reconsideration. The decision was a unanimous 4-0, with an alternate for the vacant Chief Justice seat unnecessary.

The Supreme Court did not assess any of Burt’s claims of Constitutional violations. Still, it did declare that the Judiciary has the authority to review the claims. In contrast, Speaker Shurtleff said in his filings that the House Rules were outside the judicial branch’s purview, even when they violate the Constitution of New Hampshire.

“We are thrilled the N.H. Supreme Court unanimously agreed that courts have a duty to determine whether a legislature has passed an unconstitutional rule,” said Attorney Hynes, who argued on behalf of Burt and his co-defendants.

Burt agreed. “I am so grateful for the Supreme Court saw that this is a Constitutional issue,” he said. “House rules and proceedings are for setting specific dates, etiquette, decorum, and other items like that to run the House.”

“It is not proper for House Rules to strip the citizens of New Hampshire or the Representatives that serve the New Hampshire State House of their Constitutional rights,” Burt added.

The case now heads back to Superior Court for a trial on the merits. A date for the trial has not been set yet. Any trial could be weeks or months in the future.

“We are hopeful Superior Court recognizes the right to bear arms is deserving of constitutional protection and invalidates the unconstitutional gun-free zone,” Hynes said.

With the general election coming up in just nine weeks, and organization day only 13 weeks away, the court challenge may be moot should Republicans take back a majority and reverse the rule amendment.

Hynes, who is also a candidate for Hillsborough County Attorney, insists he will press forward with the case regardless, hoping to set a precedent and prevent this from happening in the future.

As far as the Supreme Court’s vacancy, Governor Sununu says he will not bring forward a new nominee with the current Executive Council after they torpedoed the nomination of Attorney General MacDonald.