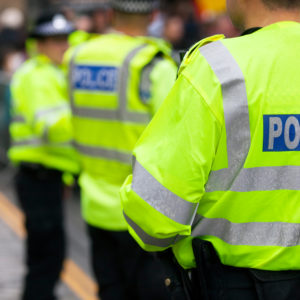 On Tuesday, the Democratic-controlled New Hampshire state Senate is expected to pass a mandate requiring police officers to report misconduct by their fellow cops. And, after amendments by the Senate Judiciary Committee, that misconduct now includes the use of chokeholds.

This legislation began in the House, where it was proposed by Rep. John Burt (R-Goffstown) and pushed by his fellow Republicans over objections from the Association of Chiefs of Police and the New Hampshire Police Association. After passing by voice vote, the language survived the COVID-19 rushed March session and made it to the Senate.

“The Senate has added language that I am very pleased to see because it strengthens the bill,” Rep. Burt told NHJournal. “The more than 99 percent good police officers in New Hampshire need an avenue for reporting the misconduct of an officer who has crossed the line. This legislation helps to ensure that we will never see a case like the tragedies in Minneapolis, Minnesota, and Buffalo, New York, here in New Hampshire.”

Part of that new language includes adding chokeholds to the list of actions defined as “misconduct.”

“For the purposes of this section, ‘misconduct’ means assault, sexual assault, bribery, fraud, theft, tampering with evidence, tampering with a witness, use of a chokehold, or excessive and illegal use of force as defined by the New Hampshire criminal code,” the Senate omnibus bill reads.

If a New Hampshire police officer sees a colleague engaged in these behaviors, he or she will be required “to notify the chief law enforcement officer in his or her department in writing immediately or as soon as is practicable after observing such misconduct.” The chief officer then has seven days to report it in writing to the Police Standards and Training Council.

“The nation’s eyes are on the criminal justice system right now, and the New Hampshire Legislature is working to take thoughtful, concrete steps to break down systemic racism,” Sen. Melanie Levesque (D-Nashua) said in a statement. “These changes, like today’s committee amendment to prohibit the use of chokeholds, are steps we can take together in the best interest of New Hampshire.”

Defining a chokehold as “the application of any pressure to the throat, windpipe, or neck, which prevents or reduces intake of air, or oxygen to the brain,” the proposed legislation bans its use by police officers except “to defend himself or a third person from what he reasonably believes is the imminent use of deadly force.”

This exception, along with the changed political conditions in the wake of George Floyd’s death, may explain why New Hampshire’s law enforcement community has reversed its opposition to the bill.

Sen. Harold French (R-Franklin) a member of the Senate Judiciary Committee, who sponsored his own parallel police reporting bill, told NHJournal, “When Rep. Burt and I brought our bills forward, [law enforcement groups] were not happy. But with everything that’s going on today,  it shows there is a need for this type of legislation.”

At Friday’s Senate Judiciary Committee hearing, the message was very different. New Hampshire Police Association president Scott Naismith told the committee his organization, along with the Association of Chiefs of Police and the Troopers Association, all now support the reporting mandate they once opposed. They also asked for the chokehold exception language to be added.

Like Burt, French’s bill was originally tougher. I wanted police who didn’t report to lose their accreditation, which would mean losing their jobs,” he said. But he accepted the compromise. In fact, French said he supports the self-defense exception for use of the chokehold.

“I want police officers to have all the tools they need to avoid using lethal force,” French said. “Sometimes the chokehold is the only option.”

If the bill passes as expected, Gov. Chris Sununu has already announced his qualified support for the mandatory misconduct reporting. Now that the police unions are on board, Sununu’s backing is virtually assured.

The mandatory reporting requirement is an extremely modest move toward police reform, not nearly as significant as, say, passing a law mandating the public release of the Laurie List. The fact this list of police officers who’ve committed previous misconduct is still hidden from the public, even in the wake of the behavior of George Floyd’s killer, is a reminder of just how reluctant New Hampshire politicians are to take on the police.

“This is just the beginning of a critical conversation and reform efforts. I am proud to work with my Senate colleagues to take these first steps and look forward to continuing this work in the next biennium,” Sen. Levesque said.