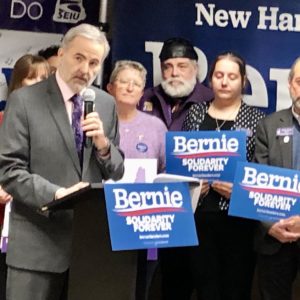 While the national media made headlines out of the alleged “brawl” between Bernie Sanders and Elizabeth Warren, a local New Hampshire union endorsement will likely have more impact on the 2020 primary’s outcome.

On Monday, the head of the New Hampshire SEA/SEIU Local 1984 announced his union is endorsing Sanders in the First in the Nation primary, an aggressive move in a primary that’s still wide open. In fact, just hours after the SEIU’s announcement, a new poll of Granite State Democrats put Joe Biden at the top of the pack at 26 percent, with Sanders at 22 percent and Warren not far behind at 18 percent. Biden currently has a narrow one-point lead over Sanders in the latest RealClearPolitics New Hampshire poll average as well.

According to SEIU President Rich Gulla, “It came down to two questions: Which candidate has proven the track record of supporting working men and women, and advocating for issues that matter to most workers in their families? And which candidate can the SEA/SEIU union members trust to personally have our backs?”

Endorsing Sanders puts the local union at odds with its national organization, the Service Employees International Union, which has declined to endorse any candidate up to this point.

Gulla made the announcement during an event at the union’s headquarters in Concord, with national co-chair Nina Turner and celebrity supporter Susan Sarandon standing by. Sanders was campaigning in Iowa, but he called into the union hall during the event to “thank my brothers and sisters in the New Hampshire SEIU… What happens in New Hampshire is clearly going to influence what happens in this entire election.”

Sarandon thanked the union for supporting Sanders, though she said she was expecting it. “I know you gave it a lot of consideration, although I would’ve been shocked if you didn’t endorse Bernie. But still, you never know.”

Sanders, who easily defeated Hillary Clinton in New Hampshire four years ago, is credited with having one of the largest state organizations in the 2020 field. He also has more New Hampshire donors than any other candidate.  Adding the organizational support of the SEIU and its 10,000 members could turbocharge Sanders’ voter turnout efforts in a crowded field where a few thousand votes can mean a big difference.

For example, in 2008, Hillary Clinton took first place from Barack Obama here by just 8,000 votes. Four years earlier, the difference between coming in third and fifth place in the 2004 New Hampshire primary was less than 8,500 votes.

New Hampshire’s Democratic political establishment has been careful not to publicly express its frustration with Sanders’ success, but behind the scenes many state party insiders are seething at the prospect of another Sanders win in New Hampshire. Some are still angry at what they perceive as Sanders’ slights toward Hillary Clinton in 2016, while others fear that nominating the Vermont Senator would hand the White House to Trump in the general election.

“I will never forgive [the Sanders campaign] for how they treated Hillary Clinton,” one NH Democratic insider told InsideSources.

Another local Democrat, state DNC Committeewoman Kathy Sullivan, was a Hillary Clinton supporter in the past and is reluctant to criticize any individual candidate. But she’s quick to point out that Sanders’ support in New Hampshire today is far lower than it was four years ago. “At this point in 2016, Sanders was at 50 percent in the polls. He ended up winning with about 61 percent. Now he’s in the mid-20s. That’s a pretty significant loss of support, yet the media seems to think he is doing well,” she told Politico.

The SEIU’s Gulla acknowledged that some members of the Democratic establishment believe Bernie would be a disaster for the party. “I just think they’re wrong,” he said.

“We’re hoping to give the Senator a big lift. He’s definitely the candidate for labor.”