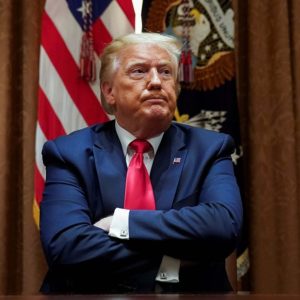 News of the FBI raid at former President Donald Trump’s Mar-a-Lago home on Monday inspired a passionate reaction from Republicans in New Hampshire.

“The Democrat Regime did everything they could to remove President Trump from office, including stealing our election,” tweeted First Congressional District GOP primary candidate Karoline Leavitt. “Now, they’re doing everything they can to keep him out. This isn’t a ‘right-wing conspiracy theory’— this is the weaponization of government against the people.”

According to media reports, the search warrant served on Trump’s home is related to an investigation into his handling of classified information. The New York Times reported the search was focused on 15 boxes of material taken by Trump from the White House and sought by the National Archives.

Trump released a statement that read in part, “These are dark times for our Nation, as my beautiful home, Mar-a-Lago in Palm Beach, Florida, is currently under siege, raided, and occupied by a large group of FBI agents. Nothing like this has ever happened to a President of the United States before.”

“They even broke into my safe!” he added.

“It’s unconscionable Joe Biden’s Department of Justice would utilize the FBI to continue to harass and intimidate President Trump and Republicans,” said NHGOP chair Steve Stepanek. “Biden is doing everything he can to get attention off of his current inflation disaster and cover up the Hunter laptop ordeal. His administration knows voters will overwhelmingly return President Trump – or a Republican that will fight for his America First agenda – back to the White House in 2024.

“This disturbing use of federal law enforcement to act upon political whims of the ruling party is a crystal clear example as to why we need to bring checks and balances back to Washington this November and take back the White House in 2024. Joe Biden has proven himself entirely unfit to serve another term after recklessly weaponizing the FBI and DOJ. Joe Biden should instead consider reallocating the FBI to cases and people that really need their attention; does the FBI know Hunter Biden’s address?” asked Stepanek.

U. S. Senate candidate Kevin Smith also spoke out. “Biden’s FBI just raided the home of President Trump, a complete abuse of power, yet they bury evidence on Hunter Biden’s blatant corruption,” Smith said via Twitter. “There must be an investigation into the FBI, DOJ, and other politicized government agencies to hold them accountable.”

On Monday morning, state Sen. Chuck Morse — also a candidate for the GOP Senate nomination — released a statement. “Whenever Democrats get desperate and low in the polls, they decide to investigate President Trump,” Morse said. “The Federal Department of Justice has enough on their plate with our open borders, increased drug trafficking, and rising crime rates without being used for political prosecutions. When I’m in the United States Senate, I’ll fight to ensure accountability by holding agencies to use their resources in the most appropriate fashion.

“These over-the-top show of power stunts which are designed in part to distract and intimidate need to stop. This is also a foreshadowing of what 87,000 IRS agents portend for every NH family.”

Fellow Republican Senate candidate Gen. Don Bolduc called out President Biden, who he said “promised us normalcy, and instead we have the private residences of former presidents being raided. The system is broken.

“Regardless if you like President Trump or not, he is still a former President and a different process should have been followed,” Bolduc added. “They better have a damn good case for what they did.”

The New Hampshire Young Republicans got to the politics of the issue.

“The Democrats must really want President Trump back in office because this is exactly how you get 47th President Donald J. Trump.”

In the Second Congressional District, GOP primary candidate Bob Burns said, “This abhorrent political raid of President Trump’s home is what we commonly see in communist dictatorships and 3rd world banana republics, not the USA. I stand with Trump against this illegitimate deep state regime, just as I have since he began his run for the Presidency.”

“Weaponizing state agencies to go after political opponents is what Mao did and what the CCP does in my native country, not what we do in America.  I FEAR THE COUNTRY I LOVE IS BECOMING LIKE THE COUNTRY I LEFT.”

“At the State Department, I saw banana republics ‘investigate’ their political rivals. Never thought I’d see this in America in my lifetime,” said Matt Mowers.

Russell Prescott said, “America is a democracy that doesn’t politicize and weaponize law enforcement for political gain. President Trump, and Republicans in general, are consistently held to a different legal standard than Democrats in the eyes of the law, which is completely unacceptable. I look forward to a thorough investigation into this unwarranted action. The American people deserve answers and to know who in the Biden Administration ultimately signed off on this raid.”

“The raid of Mar-A-Lagaio is another escalation in the weaponization of federal agencies against the Regime’s political opponents, while people like Hunter Biden get treated with kid gloves. Now the Regime is getting another 87k IRS agents to wield against its adversaries? Banana Republic,” DeSantis said.