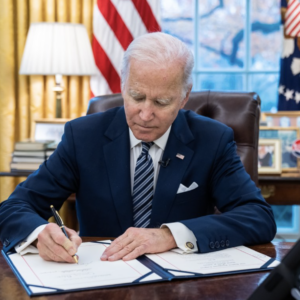 President Joe Biden claimed a major legislative win Tuesday afternoon as he signed the “Inflation Reduction Act.” It includes $375 billion to fight climate change, $80 billion for the IRS to hire 86,000 or more new agents, and billions more to extend subsidies for health insurance under the Affordable Care Act, or “Obamacare.”

“With this law, the American people won and the special interests lost,” Biden said while signing the measure. Senate Majority Leader Chuck Schumer (D-N.Y.) added, “In normal times, getting these bills done would be a huge achievement, but to do it now, with only 50 Democratic votes in the Senate, over an intransigent Republican minority, is nothing short of amazing.”

New Hampshire’s Sens. Maggie Hassan and Jeanne Shaheen, both Democrats, were quick to applaud the bill they voted for just last week.

“The Inflation Reduction Act addresses the challenges that Granite Staters are facing, and I was proud to work with my colleagues to get this bill signed into law,” Hassan said. “This law takes on Big Pharma and finally addresses the skyrocketing costs of prescription drugs that have devastated families’ budgets for too long.”

The $739 billion in spending included in the bill is paid for by tax increases and increased IRS enforcement, which the bill’s opponents have repeatedly pointed out.

“Hide your wallet! The left’s behemoth tax hike and spending law will do nothing to help struggling Americans,” Brooke Rollins of the America First Policy Institute said in a release Tuesday. “Out-of-touch liberals in Washington, D.C. are delivering tax hikes, more reckless spending, and an army of 87,000 IRS bureaucrats to grab more from families who have less.”

A release from GAIN – Grow America’s Infrastructure Now – mostly agreed. “Families across the country are struggling to keep up with the highest levels of inflation in more than forty years. Now, more than ever, Americans need policymakers to be laser-focused on reducing prices, especially when it comes to addressing the ongoing global energy crisis,” the group wrote.

“While the Inflation Reduction Act does include some positive provisions, particularly on leasing, carbon capture, and infrastructure investments, taken together, the IRA could do more harm than good.”

“Never before in my career has the middle class been so decimated by the dual forces of taxes and inflation,” Fenton said.

While the Inflation Reduction Act’s supporters have been quick to applaud what the bill does, very few are claiming the bill does what the title claims, reduce inflation.

“Inflation Reduction Act May Have Little Impact on Inflation,” read an Associated Press story headline from Monday, a day before the bill signing.

Greg Moore, Americans for Prosperity New Hampshire’s state director, agreed with that sentiment. “The comically named ‘Inflation Reduction Act’ will do nothing of the sort. Instead, it’s just another plan to grow government at the expense of the taxpayers. The more than $700 billion in new taxes will undermine the economy as we are trying to lift the nation out of recession.

“This is a policy that will grow inflation, hurt job creators, and leave numerous Granite Staters in fear of getting an audit every year with the legion of new IRS agents looking for more taxpayers to squeeze. One thing is certain though, the voters will have a chance to hold people responsible for this accountable in November,” Moore said.