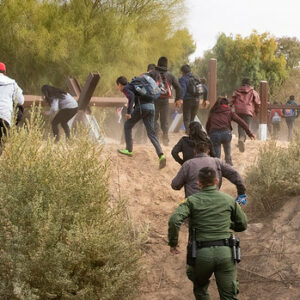 Those overdoses and deaths are directly related to the flow of fentanyl across the border from Mexico and making its way to the Granite State.

“It would be wrong to think that the border is open. It is not open,” said Jean-Pierre said.

And with that record flood of migration comes drug trafficking and other crimes, said Jessica Vaughan, director of policy studies for the conservative Center for Immigration Studies.

“The tragic spike in deaths from fentanyl and other dangerous illicit drugs is a direct result of the Biden administration’s failure to control the border and to enforce immigration laws in the interior, which makes the deadly drug trafficking business way too easy and profitable for the cartels and all their operatives and subsidiaries,” Vaughan said. “Because the Border Patrol is so tied up with processing and with care and feeding of the thousands of illegal migrants taking advantage of the catch and release policies, there are no agents on the line to prevent the drug traffickers from getting their product over the unguarded areas.”

Chinese organized crime syndicates, working with Mexican cartels, ship precursor drugs to Mexico where fentanyl and methamphetamines are manufactured. Those deadly drugs are then smuggled over the southern border and then flow freely throughout the United States.

According to the Drug Enforcement Agency, Chinese syndicates are mostly responsible for illicit drugs obtained through online markets and sent through the mail to the United States, while the Mexican cartels are manufacturing hub for drugs that get smuggled into the U.S. India is emerging as a new source for fentanyl that gets smuggled into China and then sold into America according to an unclassified DEA report.

New Hampshire Gov. Chris Sununu scoffs at the Biden administration’s claims they have got the situation under control.

“Yes, the governor believes the nationwide surge in drug deaths is a direct result of fentanyl coming across the southern border,” said his spokesperson Ben Vihstadt. “The unfettered movement of these drugs has created more of a ‘cartel driven’ market than ever before. It’s not just over-prescribing or user demand. The cartels are now putting fentanyl in a variety of other substances to drive their market of addiction.”

Even the Biden administration believes the problem is likely to get worse with the court-ordered end of the Title 42 border policies put in place by President Donald Trump during the COVID-19 pandemic. A DHS memo obtained by CNN warned the end of Title 42 will “likely increase migration flows immediately into the U.S.,” and they predict 14,000 unauthorized migrants crossing into the country each day.

On Monday, Jean-Pierre appeared to suggest the Biden administration opposed ending Title 42 and blamed the policy shift on the courts. “What I am telling you is that it was a court order that was — that we are following. And we’re going to follow the law when it comes to what the court has decided to do.”

But President Biden announced on April 1 he planned to end the policy on May 23. The courts prevented the administration from doing so until now.

During their reelection bids last month, both Sen. Maggie Hassan and Rep. Chris Pappas said they opposed the Biden plan to end Title 42 and wanted the administration to continue turning away would-be migrants. Sununu agrees.

“The governor believes the Biden administration must do everything in its power to extend Title 42 and secure the border and is pleased the Supreme Court just this evening halted Title 42 from expiring,” Vihstadt said.

Vaughan said the fentanyl crisis will get worse until the Biden team gets serious about securing the border.

“There is little to inhibit the flow of this illegal poison into communities – the product and the people who distribute it are able to do so with impunity,” Vaughan said. “But if we could regain control of the border and deport the criminals who are trafficking the drugs here, authorities could begin to clean up the streets.”