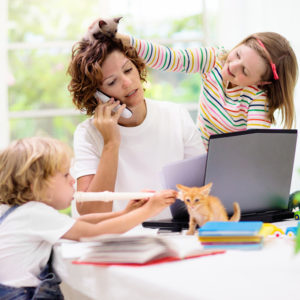 Working New Hampshire mothers, like their counterparts across America, are waiting anxiously to see whether their child’s classroom will reopen in the next month or two, and how they’ll cover the bills if they’re forced to oversee online learning at home.

In the state’s two largest school systems, the biggest question has already been answered: Both Manchester and Nashua have taken regular classroom instruction off the table. The best parents can hope for is two days of class a week. Under one scenario Manchester is considering, high schoolers would only have one day of classroom instruction each week, and four days of online class.

According to some 42,000 parents surveyed by the state Department of Education, as well as moms who spoke to NHJournal, that is not what most Granite State parents want to hear.

“Most of us are ready to send them back, to go back normally. We need to let our kids have some normalcy,” said Lisa Howe, a mother of a high schooler in Manchester, New Hampshire.

Her views are reflected in the survey data, which found  68 percent of parents with elementary-school children said they would send their children back to class. Among parents of high schoolers, that number was 74 percent.

“We all want the kids to be safe, but we want them to get an education,” Rep. Kim Rice (R-Hudson) told NHJournal. Rice, who also serves on the Division for Children, Youth and Families Advisory Board, rejects criticism from Democrats over Gov. Chris Sununu’s decision to let local school boards decide what form school should take in the fall.

“The problem we run into in New Hampshire is we have the North Country, and then we have the cities,” Rice said. “They’re very different. We are a local-controlled state–and we always will be–because we are so different.”
But perhaps not so different from the rest of America, where similar debates are underway.

Stephanie Engelman, a mother of five who lives in Indianapolis, works from home as a writer. Four of her kids will be in school in the fall attending Catholic schools, and the Archdiocese of Indianapolis has announced its schools will reopen on schedule. But her youngest, a five-year-old, will be staying home instead of starting at public kindergarten.

“Basically, I’m just going to not sleep very much. That’s my plan,” she said.

The public school is planning to open, but with a mask requirement for all kids.

“I had already decided I don’t want my five-year-old wearing a mask all day,” she said, “and I also didn’t want to teach him virtually.”

Online learning for kindergartners? “It’s a joke,” she says.

More and more school districts are joining Manchester and Nashua in announcing they won’t be opening for full, in-person instruction in the fall. Some are going even further.

The Madison, Wisconsin, school district recently announced it’s going to virtual-only instruction until at least November 3, following a Madison teacher’s union demand for all-virtual schooling until there are no new COVID-19 cases in the city for at least 14 days.

Milwaukee schools will also remain closed for in-person instruction for at least the first part of the fall semester, as will schools in Ft. Lauderdale, Atlanta, Nashville, Houston and most school districts in the state of California.

In New York, Gov. Andrew Cuomo has said final decisions will be made on school reopenings the first week in August but said last week: “If the virus stays where it is now in New York and we keep this level of spread, then you can open schools.”

In California, before Gov. Gavin Newsom has issued an order that would keep most California schools virtual only for now, the Los Angeles Teacher’s Union issued a paper saying teachers shouldn’t return to work until there’s a moratorium on charter schools and the Los Angeles Police Department is “defunded.”

In Bloomington, Indiana, a Change.org petition demands the school board guarantee that social distancing will be “maintained and enforced at all times,” including on school buses and in classroom. It also calls for students to be transported to low-density schools if needed to allow children to stay six feet apart.

Many parents understand that keeping children, particularly elementary school children, six feet apart and in a mask is a forlorn hope at best. In Manchester, Superintendent John Goldhardt urged a mask mandate for students in the third grade or higher, while younger students would be “strongly encouraged” to wear one.

The city’s school board instead voted 13-1 to mandate masks for all students.

Getting first graders to stay in a mask even two days a week will be quite the challenge.