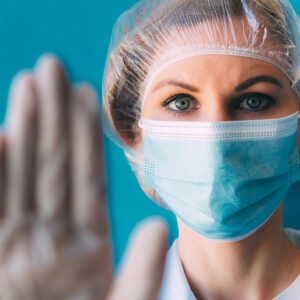 Did the Sununu administration’s policy of racial preferences for vaccine distribution keep a Granite Stater from getting the shot because he was White?

That’s the allegation a New Hampshire man is making in a complaint with the United States Department of Health and Human Services.

“New Hampshire’s racially discriminatory vaccination program is a disaster. The health officials responsible have done grave harm both to the vulnerable people forced to wait for a life-saving vaccine because of their skin color and to the practice of medicine. New Hampshire’s guilt is gin clear, and HHS needs to take prompt and aggressive action to ensure that such illegal discrimination never happens again,” Michael Buschbacher, an attorney at Boyden Gray & Associates, said in a statement released Tuesday.

The man, who has asked that his identity remain private, filed the complaint this week through his attorneys at the Washington D.C. law firm and the Ethics and Public Policy Center. He is described as a 28-year-old White male who is diagnosed with diabetes, and therefore at greater risk from COVID-19.

During the early days of the vaccine rollout when demand far exceeded supply, NHJournal reported the Sununu administration made the decision to set aside 10 percent of the vaccines it received specifically for people of color. “We have a plan in terms of allocating a certain amount of our vaccine to ensure equity,” Sununu said at the time. “A plan to reach our communities that tend to be inequitably served by our healthcare system.”

Vaccines were not available for the general public until April 2 under the state’s vaccine roll-out plan. Senior citizens, people living in long-term care facilities, healthcare workers, first responders, and others deemed at greater risk were part of the first phases of the vaccine distribution plan.

However, as part of the plan, the state created racial and ethnic criteria to determine early eligibility for COVID-19 vaccinations, to get the vaccine to vulnerable populations. At least 18 other states also prioritized people of color over those at higher risk as part of their “equity” plans.

The Public Health Council of the Upper Valley in Lebanon had a clinic to administer vaccines to minorities on March 27, which was publicized in the Valley News, according to the complaint.

On April 2, the state made the vaccine available to everyone over age 16 through the VINI system.

Instead of calling the VINI line, or going through the state’s VINI website, the man reportedly called the Public Health Council of the Upper Valley to ask about a vaccine appointment. According to the complaint, the man never spoke to a person on the phone, but instead listened to a recorded message.

“He was told through a recorded message that appointments were ‘fully subscribed for people of color.’ (He) was denied the ability to get a vaccine solely because of his race, color, and national origin,” the complaint states.

Not being able to get a vaccine at one clinic, despite numerous other options to get vaccinated, is “blatant discrimination” according to Rachel Morrison, a lawyer with EPPC.

“No one seeking medical care should ever be sent to the back of the line because of their race, but that is exactly what the state of New Hampshire did with COVID-19 vaccinations,” Morrison said, arguing that the complainant’s ability to get vaccinated at multiple other clinics doesn’t prevent the state’s behavior from being “blatant discrimination.”

The man did eventually get vaccinated in May, according to the complaint.

A spokesman for Gov. Chris Sununu dismissed the complaint as unserious.

“New Hampshire has been one of the most successful states in the nation at vaccine rollout, and early on in the crisis was the fastest state in the nation for getting shots in arms quickly. New Hampshire opened the vaccine to everyone on April 2, before nearly every other state. Everyone who wanted a vaccine could have gotten a vaccine, and this complaint is going nowhere,” Sununu’s spokesman said.

The legal arguments made in the man’s complaint are similar to the points raised in the federal lawsuit filed against the state by James Pietrangelo, a 55-year-old North Country man who claimed the state’s vaccine set aside for minorities was discriminatory against him as a White man.

United States District Court Judge Paul Barbadoro was unconvinced by Pietrangelo’s case that he was unfairly discriminated against because he could not get a vaccine through the equity plan designed for minorities because of his race. Barbadoro denied Pietrangelo’s request for an injunction against the state.

Pietrangelo long ago has since qualified for the vaccine under state guidelines.

Under New Hampshire’s vaccine rollout plan, the state was going to set aside up to 10 percent of the available vaccines for clinics that served minorities. However, records represented in Pietrangelo’s case, showed that the state did not use the full 10 percent at these sites.

“The State has never used 10 percent of its vaccine supply as part of the equity plan because, according to the State, the populations it aims to vaccinate are hard to identify and reach,” Barbadoro wrote in his order denying the injunction.

According to data from the Kaiser Family Foundation, there is currently no significant gap in vaccination rates among ethnic groups in the U.S. While 71 percent of White adults are vaccinated, so are 70 percent of Black adults and 73 percent of Hispanic adults.