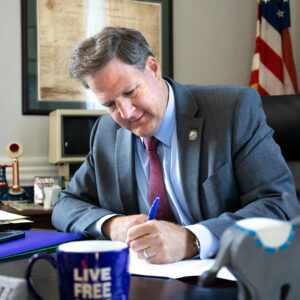 Granite Staters will get help this winter paying for heat and electricity after the legislature passed a $42 million plan to fund energy assistance for the middle class.

Democrats, on the other hand, used the news to repeat the debunked claim that Sununu is responsible for setting the state’s utility rates.

Utility rates are set by the independent Public Utilities Commission.

Partisan rancor ahead of the midterm elections was not enough to prevent the legislature from enacting utility relief at a time when energy costs are soaring in New Hampshire and nationwide. The 12-month inflation rate is currently 15.8 percent for electricity and 33 percent for natural gas.

The new law uses surplus New Hampshire state budget funds to expand energy assistance this year, allowing middle-income New Hampshire residents to qualify for aid. Previously, the aid was only available to households earning up to 60 percent of the state median income. Lawmakers expanded eligibility to families earning up to 75 percent of the median, who can now apply for up to $450 in heating assistance and another $200 in electricity assistance.

Sununu originally wanted to use $60 million in surplus funding to send every home $100 in energy assistance, but that plan was rejected by lawmakers who came up with a more targeted proposal.

“That seems like a meaningless political gesture to me,” Rep. Steve Smith (R-Charlestown), said of Sununu’s initial plan.

Rep. Marjorie Smith (D-Durham) said the bill is not a long-term solution to high energy prices in New Hampshire, but it will help.

“Maybe it’s just a band-aid, but if you scrape your knee a band-aid helps,” she said.

House Speaker Sherman Packard (R-Londonderry) said not only will the bill help people pay for heating this winter, but it does so in a responsible manner.

“The fiscally responsible leadership of the General Court of New Hampshire has produced a budget surplus which allows us to create this one-time emergency relief package that will help offset rising fuel and electric costs this winter,” Packard said. “This bill provides direct relief to those in need and reduces the anticipated burden placed upon municipal welfare programs – a cost that would otherwise be passed along to property owners at the local level. We believe these surplus funds will alleviate some of the financial pressure for NH families who would otherwise not qualify for existing assistance programs. By coming together today, we chose New Hampshire citizens over party politics.

“Due to no fault of their own, many Granite Staters who have not previously needed assistance may find themselves unable to pay their bills this winter and do not qualify for the federal assistance programs. We want to ensure those people have some help,” Osborne said.

New Hampshire Democrats, however, point the finger of blame for rising utility costs at Sununu.

“New Hampshire has become an outlier in New England with record rate increases because Gov. Sununu has consistently rejected efforts to increase energy efficiency and production of renewable energy,” Cote said. “Granite State families cannot afford the 50 percent increase that will hit them this fall, and this bill provides temporary relief for lower-income households that are ineligible for existing programs.”

In fact, New Hampshire currently has the second-lowest electricity rates in New England and historically had lower rates than Massachusetts.

The legislature also failed to override any of Sununu’s eight vetoes.