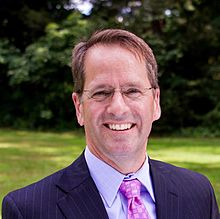 New Hampshire Education Commissioner Frank Edelblut joined the chorus of voices defending New Hampshire’s private and religious schools and the thousands of parents who use them, even as the seacoast Democrat who sparked the recent controversy continued her attacks.

After NHJournal’s report appeared, Le pulled down her post and replaced it with a profanity-free version of her attacks on private and religious schools, claiming they discriminate against special needs students.

“Join me in calling for equal access to and protections at Private and Religious schools for K-12 children who experience disabilities in NH. Currently missing in 92% of admission policies,” Le said.

While some of her fellow Democrats came to her defense, many people in New Hampshire’s education community expressed dismay at her statement.

“Why do people have to be so divisive,” asked Kate Baker, executive director of the Children’s Scholarship Fund.   She specifically rebutted Le’s claim that non-public schools in New Hampshire are discriminating against the disabled.

“Fifteen percent of our scholarship recipients are special needs children who choose to attend non-public schools, and the families are extremely happy.”

On the House Education Committee, Le’s antagonism toward private education in general, and school choice programs in particular, is well known.  After her anti-private-school outburst,  House GOP leader Dick Hinch called on Speaker Steve Shurtleff to remove her from the Education Committee. The Speaker’s office has declined repeated requests for comment.

Interestingly, so have the Diocese of New Hampshire and the private schools in Rep. Le’s community, which supporters of non-public education say is a sign of how embattled their schools are in the current political climate. Who wants to defend elite education academies while Sen. Bernie Sanders and other 2020 Democrats are denouncing affluent families as enemies of the people?

Meanwhile, national Democrats like Sens. Kamala Harris and Elizabeth Warren are attacking faith institutions like the Knights of Columbus as hate groups, or insulting supporters of traditional marriage as losers who can’t get a date.

“We’ve been fighting the bias against private and religious school in the state legislature for years,” said Education Committee member Rep. Glenn Cordelli (R-Tuftonboro.)  “We’ve had to re-write bills like the Town Tuitioning Program to specifically exclude religious schools in order to get some Democrats’ support.”

So does Rep. Le belong on the committee that oversees the private and religious schools she so despises?

“As a member of the Education Committee, I expect that if I had said the same thing, Speaker Shurtleff would remove me,” Cordelli said.