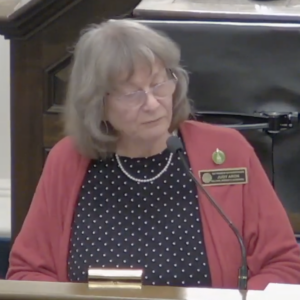 For Democrats, who overwhelmingly voted against the pro-Israel resolution, the troubling issue of antisemitism within their ranks was raised yet again.

Late Thursday night, the House took up a resolution stating “our strong support for the Jewish people and our truest ally in the Middle East, the Nation of Israel; the recognition of the current and historical capitol [sic] of Israel being in Jerusalem; and the location of the embassy of the United States now finally in Jerusalem where it should have been and where it should remain.”

Democrats tried tabling, amending, and indefinitely postponing the resolution, all in an effort to keep it from passing. The final vote was 175 to 107 in favor, with just 15 Democrats joining the Republicans’ unanimous support.

Progressives, led by Democrat-turned-independent Rep. Tony Labranche, opposed the resolution for being too pro-Israel. In remarks from the floor, Labranche claimed Israel has “long illegally occupied Palestinian lands” and cited nationally-known progressive groups to label Israel “an apartheid state.”

Labranche also referenced opposition to the resolution by the New Hampshire chapter of Jewish Voices for Peace (JVP). According to the Anti-Defamation League, JVP “is a radical anti-Israel activist group that advocates for a complete economic, cultural and academic boycott of the state of Israel.”

Labranche’s remarks were followed by an emotional speech from the resolution’s co-sponsor, Rep. Judy Aron (R-Acworth). Aron, whose family includes Holocaust victims and survivors, came close to tears several times during her comments.

“I believe that we must, as a legislative body, make a bold statement of support and solidarity with the Jewish people and their homeland, Israel,” Aron said. She recounted that both she and her husband lost family members in the Holocaust and that they have experienced antisemitism firsthand.

“We’ve seen the graffiti swastikas on synagogues and we’ve heard the cries of antisemites who want to push the house of Israel into the sea,” Aron said. “So please support this resolution and reaffirm our support for Israel and the Jewish people.”

While Acting House Minority Leader Rep. David Cote (D-Nashua) continues to be a no-show in the House — he hasn’t been in attendance to cast a vote since 2020 — his assistant, Rep. Mary Jane Wallner (D-Concord), led her caucus in an overwhelming vote against the resolution.

Some see a trend, going back to the Democratic state party hosting Rep. Ilhan Omar (D-Minn.) during the 2020 presidential primary season after her antisemitic statements were denounced by her fellow congressional Democrats. They point to state Rep. Maria Perez (D-Milford) and her “From the river to the sea, Palestine must be free” social media postings, and the reluctance of House Democratic leadership to address them. And then there are public claims of anti-Jewish sentiment in the Democratic caucus from Reps. Nicole Klein Knight and Rosemary Rung.

Does the New Hampshire Democratic Party have an antisemitism problem?

Aron told NHJournal she’s not sure.

“Is there antisemitism in the Democratic caucus? I don’t know. I know some comments have been made recently, but I think it’s more of people saying things they didn’t really understand.

“In the Republican caucus, I’ve been lovingly embraced by the members. After my speech, I had lots of hugs from people who said they were touched — they were in tears, I was in tears. It’s a heart-touching, soul-touching thing.

“My mother-in-law lived in hiding in Germany during the war. My husband’s father tried to get his family out of Essen, Germany, to join him in Bogata, Colombia, at that time too. I have a cousin, Judy Altmann, who speaks to students about her experience as a Holocaust survivor. ”

At the same time, it’s hard to ignore statements from elected Democrats, including from the House floor, that are either overtly antisemitic or echo the language used by groups that support Israel’s destruction.

After the vote, progressive activist Asma Elhuni took to Twitter: “The NH House decided supporting Israel in their oppression against Palestinians is important to make known.”

For Aron, the lessons of the history of the Jewish people extended beyond the debate over Israel.

“This is the foremost reason I fight in the State House for the freedoms in the Bill of Rights –free speech, and the Second Amendment — because I know how dangerous it is when they are lost,” Aron said.